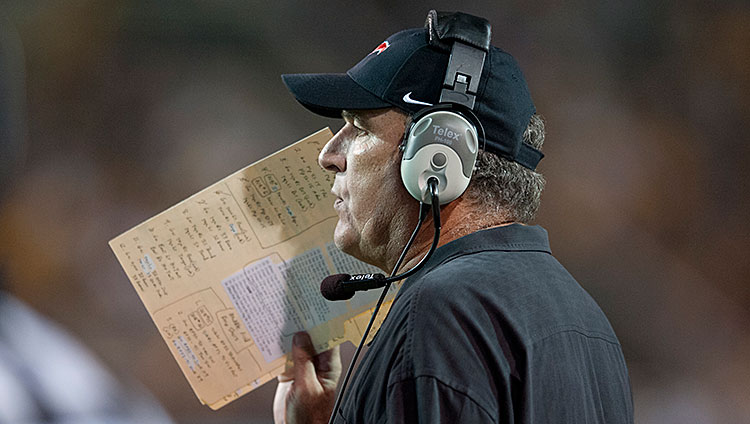 Considering the kind of week we’re having, the news that the head coach of 0-2 SMU had resigned was a minor blip on the radar. But when that coach is June Jones — and when his resignation means that, for the first time in roughly 30 years, no NFL or major college program will be running the famed run-and-shoot offense — that blip on the radar becomes a historically important football moment.

Jones resigned on Monday, citing “personal issues.” It’s clear something was amiss at SMU. In two games, the Mustangs were outscored 88-6 and outgained 927-341. Sources within the program had told me that recently Jones hadn’t been much of a presence on the recruiting trail — the lifeblood of any college team. And Jones’s relationships at SMU had long been tested. In 2011, he essentially accepted the job as head coach at Arizona State, only for ASU to back out at the last minute.

The anticlimactic end to his time at SMU shouldn’t diminish what Jones has accomplished over the course of his career. A longtime NFL assistant and head coach with the Houston Oilers, Atlanta Falcons,1 and San Diego Chargers, Jones’s second act was to become one of college football’s best turnaround artists — first with Hawaii and then with SMU.

He led a Rainbow Warriors program that had lost 18 games in a row before his arrival to a 9-4 record and a bowl game. It would be the first of six bowl appearances, including a Sugar Bowl and a 12-1 record in his final campaign. At SMU, he resuscitated a moribund program that had only one winning season in 20 years, and took them to four bowl games in six full seasons.

What @CoachJuneJones did with the @SMU 🏈 program is a miracle. We were beyond lousy when he arrived & he turned us into champions.

Yet Jones’s most important contribution to football will be his association with the run-and-shoot. It was an offense he first encountered as a record-breaking quarterback at Portland State while playing for Darrel “Mouse” Davis. The run-and-shoot was developed by Glenn “Tiger” Ellison.2 Sometime in the mid-1950s, Ellison stopped to watch a group of kids play backyard football. Instead of huddling and running off-tackle, as his team did, the kids played a free-flowing game. The quarterback ran around while his receivers improvised ways to get open. Ellison’s insight was to channel his players’ improvisational instincts into an offense that could be run at any level. The run-and-shoot was born.

Some years later, Davis refined Ellison’s insights into a few four-receiver formations and a handful of pass concepts, where each receiver had the freedom to run three, four, five, or sometimes as many as six different adjustments, based on how the defense played. One “play” in the run-and-shoot could become, on the fly, the equivalent of 20 or 30 plays in a traditional offense. “The concept of reading the coverage, nobody did it,” Jones told CBSSports. “Nobody in the NFL [in the late 1970s and early 1980s] allowed their receivers to read coverage. If you’re running a curl, you’re running a curl. That was it. There was no conversion.”

It’s impossible to overstate the importance of this insight — it quite literally changed passing offenses forever.

The run-and-shoot had its moment in the 1980s and early 1990s. It was three NFL teams — the Lions, Falcons, and, most successfully, the Oilers — and a number of college programs. Quarterbacks put up insane statistics in the system, most notably Andre Ware of the Houston Cougars, who won the Heisman Trophy in 1989.3

By the late 1990s, the “pure” run-and-shoot had been taken out of football, done in by a combination of the zone blitz, which ravaged the original Davis/Jones run-and-shoot pass protection scheme, and the weight of negative sentiment (Buddy Ryan famously referred to the offense as the chuck-and-duck). None of the run-and-shoot teams managed to win a Super Bowl or a college championship, despite the gaudy numbers.

When Jones went to Hawaii in 1999, he didn’t just resuscitate a program, he also revived his entire offense. He changed around some of the protections — he and a friend, Hall of Fame 49ers coach Bill Walsh, developed new ways to protect QBs against zone blitzes — and made it so guys like Nick Rolovich, Timmy Chang, and Colt Brennan were able to put up staggering totals in passing yards, points, and, considering the school, wins.

In a world where NFL teams use three or more receivers and the shotgun on a majority of snaps, and college offenses are dominated by spread-based attacks, you don’t need to look far to see the run-and-shoot’s influence. But it’s a bit strange that, with Jones retiring, no NFL or college offense directly traces its roots back to the run-and-shoot, leaving an opening for other flavors of the spread to saturate football. A major reason for this is that Jones and his run-and-shoot confidants are notoriously secretive — so, few people learned enough of the offense to confidently run it at a major college level.

The insights of Ellison, Davis, and Jones were so profound, they’ve permeated football itself. While we no longer see NFL teams trot out run-and-shoot classics like “Go,” “Switch,” and “Choice,” you see the practiced improvisation that is the run-and-shoot’s true legacy every time a receiver adjusts his pass route — from a corner to a post, or a curl to a corner — to find an opening in the defense.

Tiger Ellison and Mouse Davis are the inventors of the run-and-shoot, but it’s June Jones who brought it into the modern age, teaching us that football is still a game, all over again. And with games, sometimes the best strategy is to give the players the tools they need to just play.