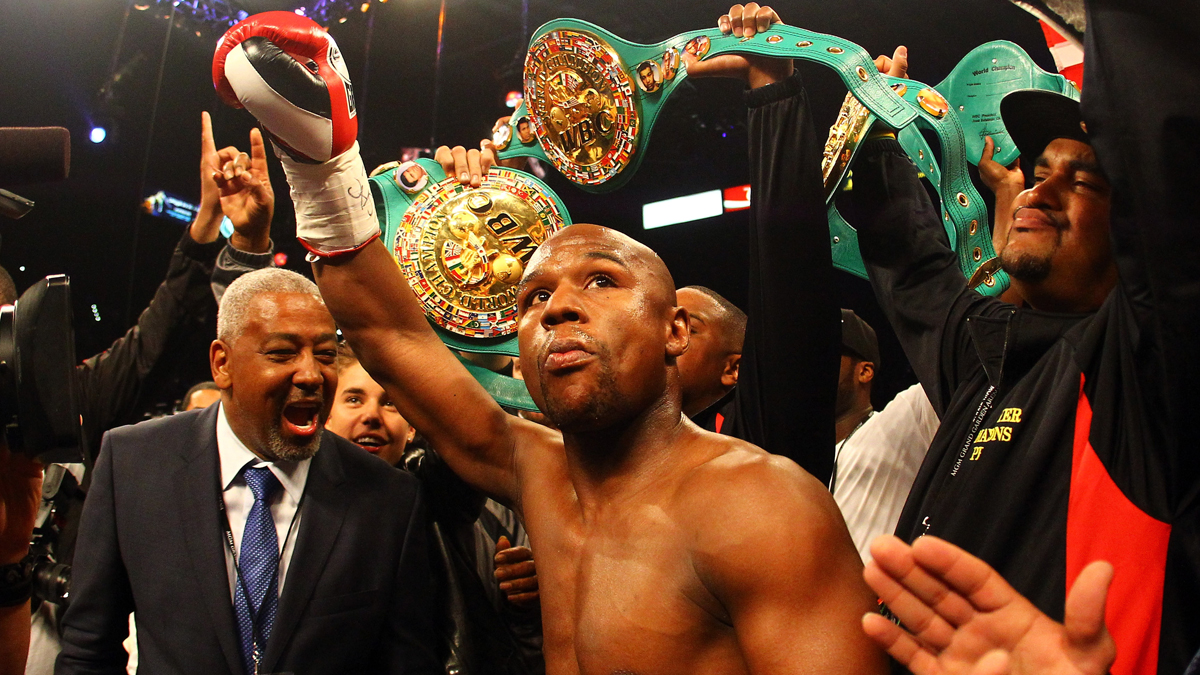 In 2012, Grantland introduced the boxing Relevance Rankings, an attempt to combine pound-for-pound talent with marketability to rank fighters according to their overall clout in the fight game. The Relevance Reports build off of that franchise by grouping a handful of fighters who fit within a certain category. This installment will consider boxers whom an overwhelming segment of the sport’s fan base seems to root against and/or denigrate mercilessly on Twitter. (To see the current overall Relevance Rankings, scroll to the bottom of the page.)

The most hated man in boxing has never given or taken a punch in a professional prize ring. Most fans have never seen his face or heard his voice. But they know his name. They know it because they hear it after almost every major fight these days, preceded by the words “I’d like to thank …”

As sports fans, we tend to hate people in positions of power who seem indifferent to the desires of the audience and are getting rich on the backs of the athletes — think Drew Rosenhaus, Roger Goodell, Sepp Blatter. In boxing, the man who currently best fits that description is Al Haymon. He “advises” (read: manages, or as some have alleged, promotes) an estimated 115 fighters, he is widely considered the most powerful person in boxing, and lately he has been wielding that power to ensure his fighters oversize paychecks for overwhelming mismatches — except when he’s convincing them to forgo the biggest paychecks of their careers out of loyalty to him.

Haymon isn’t like Don King once was, openly promoting himself and building himself into a larger-than-life villainous character. Haymon prefers to pull his strings from behind the curtain. He never grants interviews and rarely attends fights. And that serves to make him even more reviled, because he doesn’t make himself part of boxing; he comes across more like an opportunistic, interloping scavenger on the sport.

But Haymon is not a fighter, so he will not crack this countdown of the five fighters fans most love to hate. Haymon’s clients will, however, be well represented here.

Before we count down the boxers who made the cut, though, a quick word on a few who narrowly missed out: Bernard Hopkins plays the heel brilliantly, but he also plays the admirable underdog well enough at the advanced age of 49 to stay outside the top five; the magnificently gifted Andre Ward is wasting his prime years with legal wrangling, but the animosity toward him is perhaps tempered by the sense that he’s screwing himself worse than he’s screwing fans; Grantland has already said all it needs to say about why you should probably hate light heavyweight champ and convicted ex-pimp Adonis Stevenson; and Amir Khan comes off more as comic relief than sinister malefactor.

And now, on to the five fighters we believe the greatest percentage of the boxing community would like to see take a beating — or, to frame it another way, here are the second through sixth most hated men in boxing: 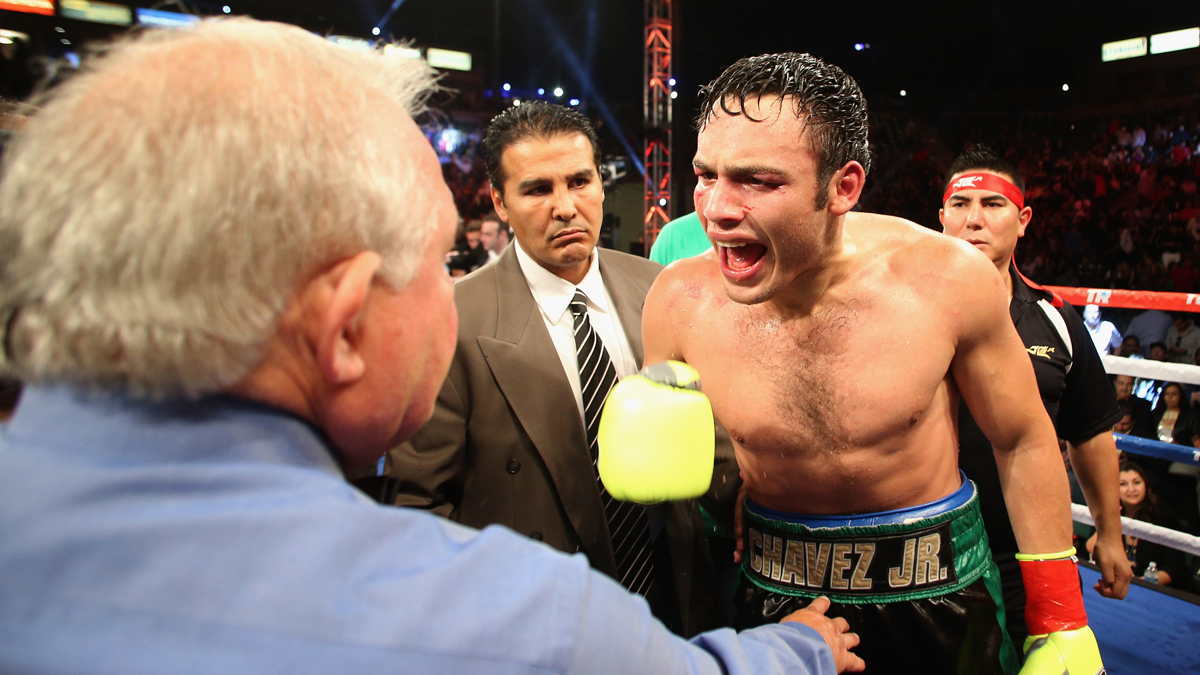 Boxers rarely grow up privileged; most of them start fighting because they have few other options. Chavez Jr. grew up more Ricky Stratton than Ricky Hatton. His childhood was spent shoulder-riding to the ring in the entourage of the most beloved Mexican champion ever — his father. So, naturally, outside of his inherited Mexican fan base, the boxing community rejected Chavez early in his career. But then Chavez started fighting legit contenders and beating them. By the time he’d blown through Peter Manfredo, Marco Antonio Rubio, and Andy Lee, Chavez had earned a championship fight and was among the most popular stars in the sport. And he maintained that status by nearly scoring a final-round knockout of middleweight champ Sergio Martinez in 2012.

Since then? A failed drug test and subsequent suspension. An inability to make weight no matter how many times the weight limit was elevated. What should have been a loss to tough journeyman Brian Vera, if not for the judges blindly favoring Chavez. In the six months since his last fight, one indication after another that he has traded his jump rope for a deep fryer and has lost interest in boxing. (Hence his removal from the Relevance Rankings top 20 below.)

Now Chavez is back to being the spoiled, overprivileged, under-disciplined brat he was pegged as from the start. It has gotten so bad, boxing fans have even stripped him of his title of Julio Cesar Chavez Sr.’s son: 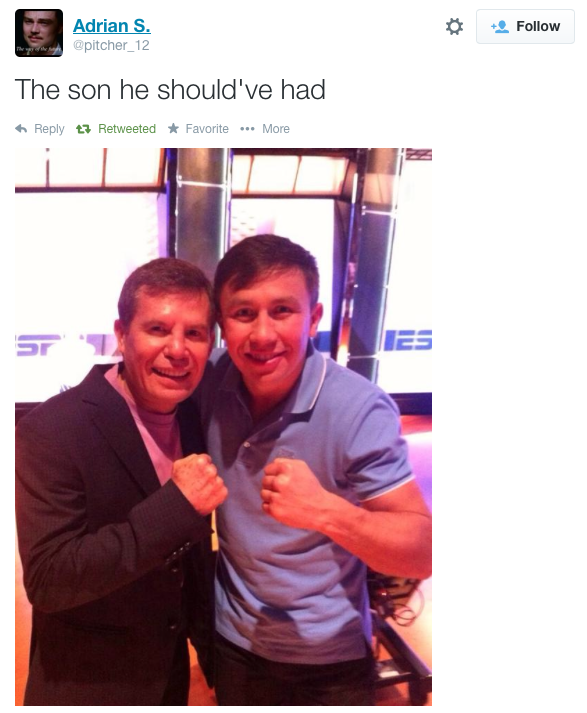 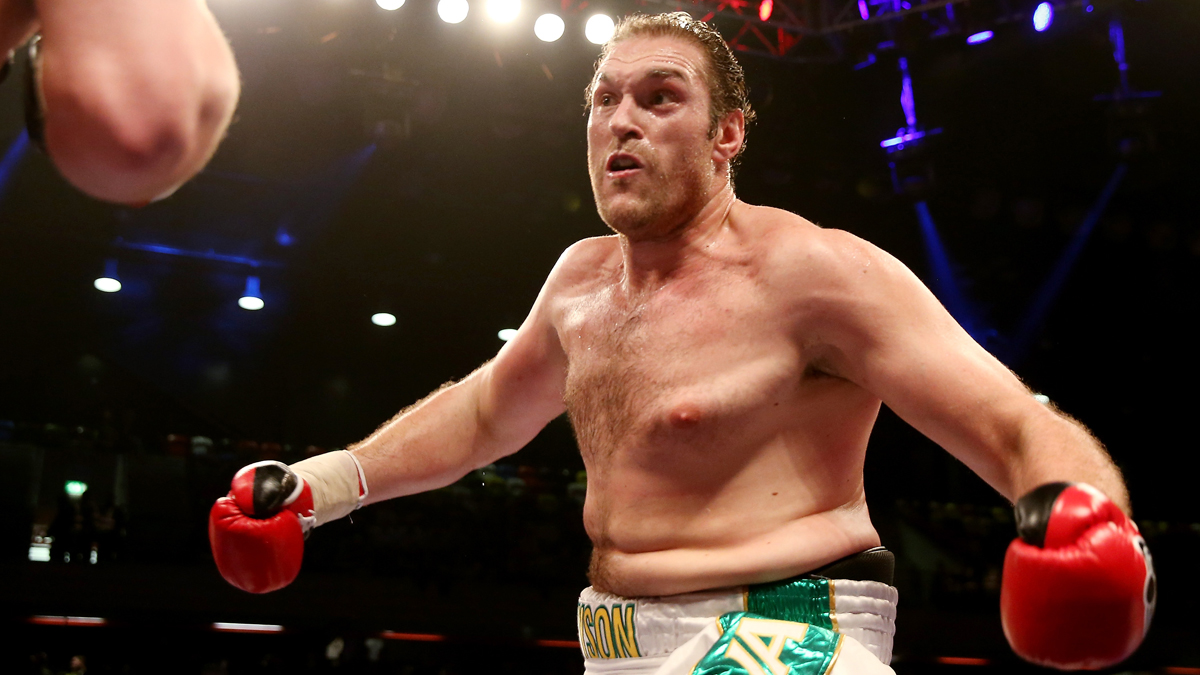 There are two schools of thought on undefeated British heavyweight Fury: He’s a really bad stand-up comic whose use of coarse language makes him a hilarious, honest alternative to the programmed, neutered athlete-speak we hear everywhere else; or he’s just a racist/sexist/homophobic cretin who needs to punch himself in the face more often.

He can be both, of course. He can be offensive and funny at the same time. But he lost the benefit of the doubt this July when he pulled out of a fight with Alexander Ustinov on just a few hours’ notice, ostensibly because of a sick uncle. (Later reports revealed that in addition to the “sick uncle” excuse, Fury’s wife had recently suffered a miscarriage.) So what’s so bad about pulling out of a fight for personal reasons? Nothing — if you haven’t made a habit of calling everyone who’s ever pulled out of a fight with you 10 different variations on a word that rhymes with “wussy.” 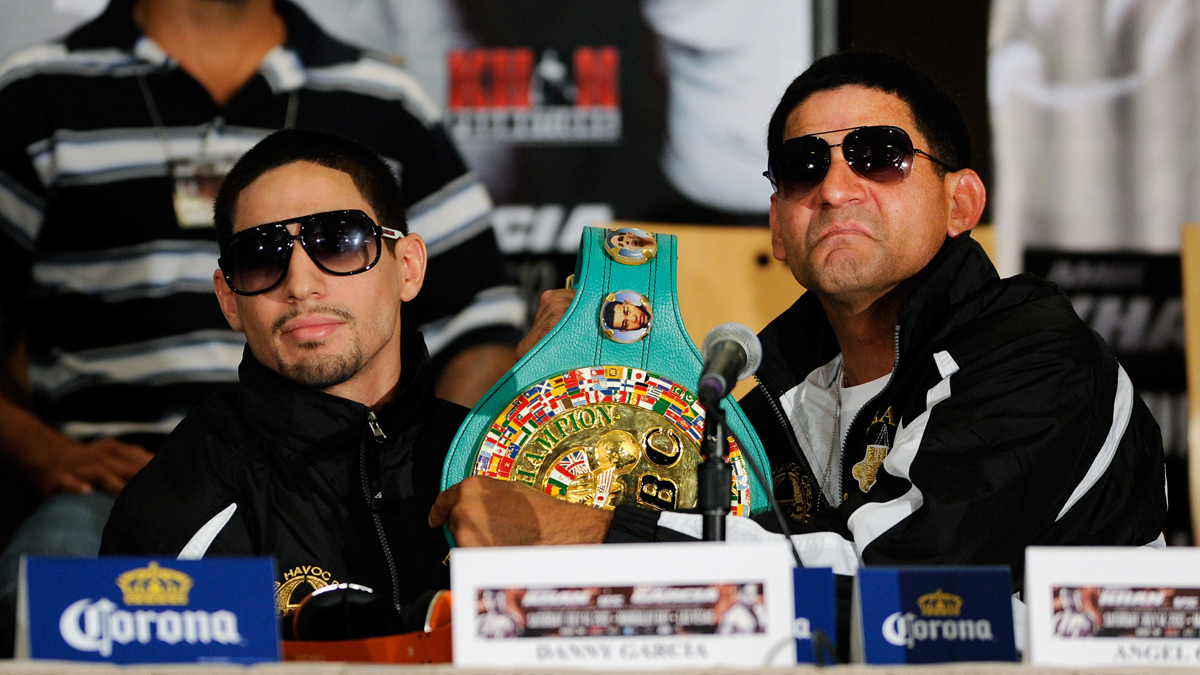 It’s hard to put your finger on exactly why fans despise Garcia so much. There’s a nebulous douche factor at play that I don’t fully understand; beyond his terrible fashion sense, I don’t get the level of venom. But it’s there. People hate this guy. 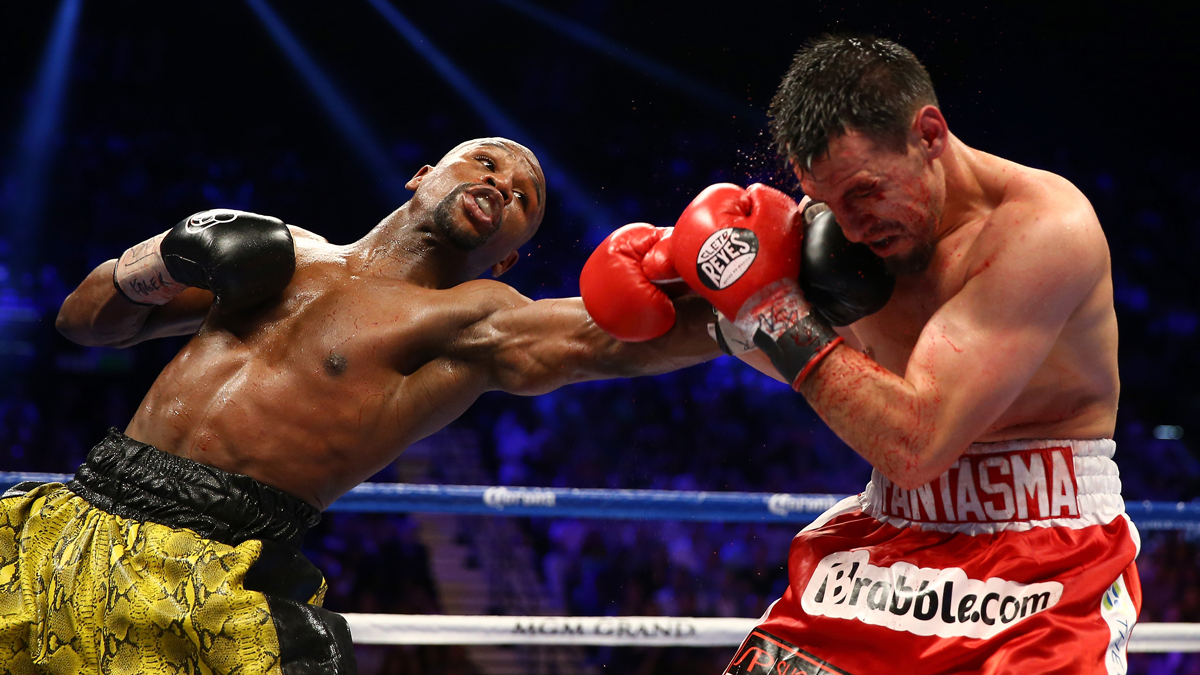 Let’s list the three primary reasons to hate Mayweather, from least important to most important:

• Despite being the best fighter on the planet, he can be a chore to watch in the ring (especially in the latter half of a fight, when Mayweather typically plays it safe rather than pursuing a knockout).

• He’s a loathsome person when the 24/7 or All Access cameras are on.

• He’s an even more loathsome person when the cameras are off.

In case you haven’t noticed, domestic violence is kind of a hot-button issue these days. Four days before the Ray Rice elevator video came out, Mayweather’s ex-fiancée Shantel Jackson sued him, alleging various forms of abuse (to say nothing of previous charges of domestic abuse against Mayweather and a 2011 conviction for which he served 60 days in prison). But whereas Rice lost his job, Mayweather fights a rematch Saturday night on Showtime pay-per-view against Marcos Maidana that will earn him some $30 million. Mayweather’s and Rice’s situations are not identical, but they overlap enough to cause some justifiable cognitive dissonance. 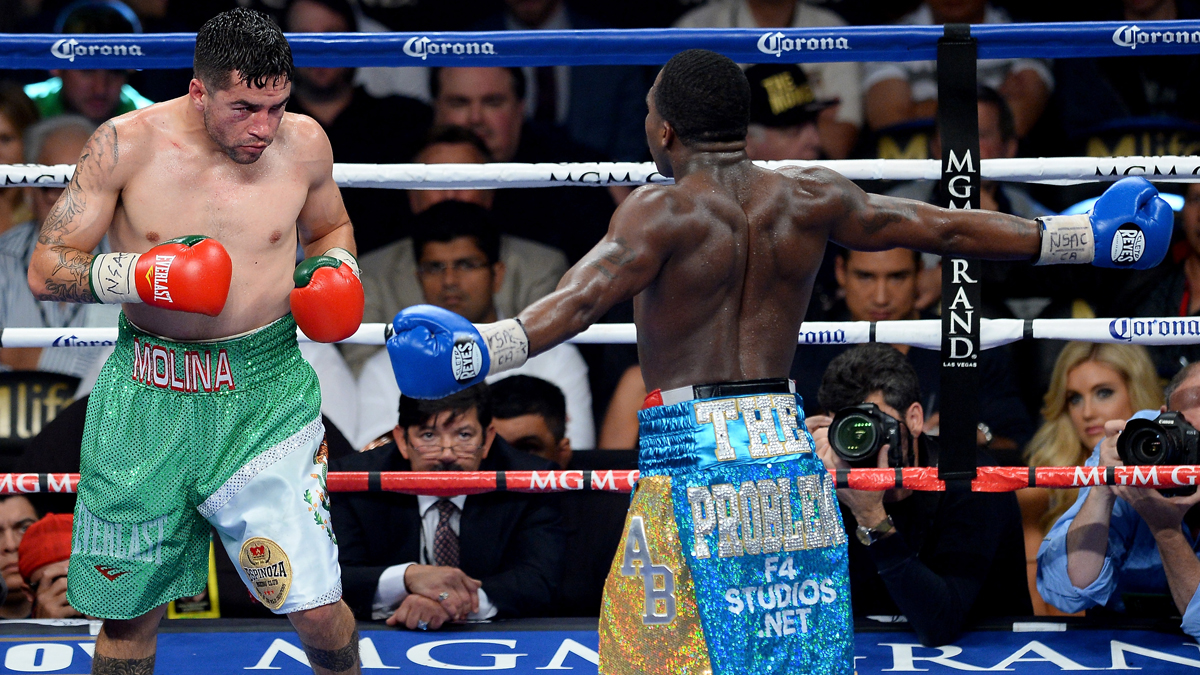 Anything “Money” Mayweather can do, “About Billions” Broner can do worse. Broner is a bootleg Mayweather in every way. He isn’t as skilled a boxer (who is?), his shtick is somehow more grating, and he’s simultaneously more over-the-top and less self-aware.

If you’re unfamiliar with Broner, one look at him in this shirt should tell you everything you need to know: 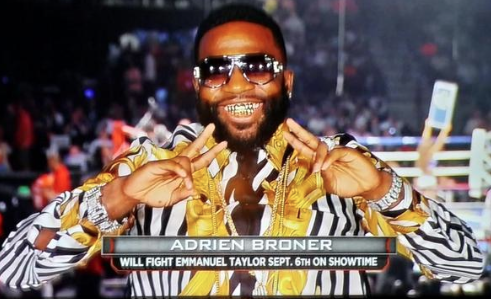 Mayweather has millions of haters, but also millions of devoted fans. Broner’s haters more demonstrably drown out his supporters. Even in his hometown of Cincinnati last Saturday, where he won a close decision over Emanuel Taylor in an entertaining scrap, the crowd reaction was mixed.

Broner combines the worst qualities of everyone else on this list: the intentional failure to make weight of Chavez; the crudeness of Fury; the sartorial struggles of Garcia; and everything about Mayweather except, thankfully, the domestic-violence charges.

My wife rarely watches boxing, but she passed through the living room this weekend as I was watching Broner’s postfight interview. After less than 30 seconds, she piped up, “Who’s that asshole?”

The fighter we most love to hate, that’s who.

Barr and the Boys: It’s Time to Get Excited About the Vikings Defense