Barr and the Boys: It’s Time to Get Excited About the Vikings Defense 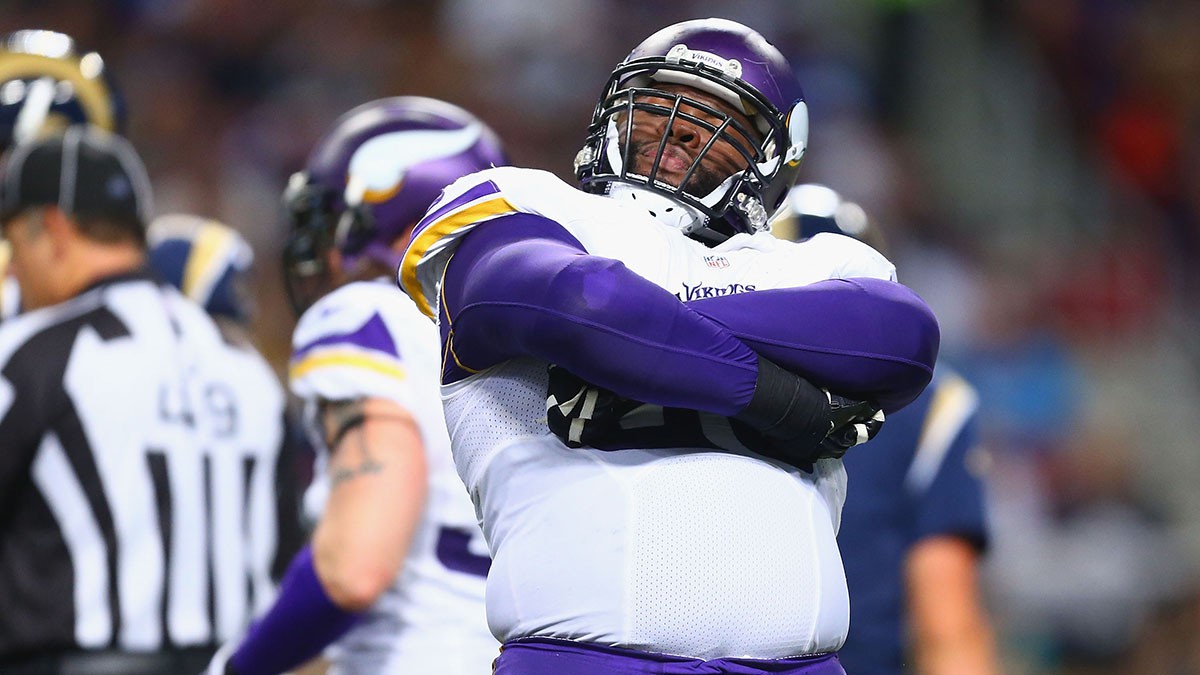 Terence Newman said it best. Earlier this year, right after Washington hired Jay Gruden to be its new head coach, Newman congratulated his team’s ex–offensive coordinator while also wondering when his defensive coordinator would finally get his chance.

That being said, Mike Zimmer is and always will be the best option to be head coach who is not one. #truth

Newman knows Zimmer well. Zimmer was the defensive coordinator in Dallas when Newman was drafted, and he was in charge of Cincinnati’s defense when Newman went there and revived his career.

In the last few seasons with the Bengals, Zimmer oversaw one of the best defenses in football. The Bengals finished 10th in DVOA in 2012 before finishing fifth last year. And it was all done with castoffs, middle-round picks, and players who weren’t even drafted at all. Undrafted Vontaze Burfict turned into a Pro Bowler. Third-round pick Michael Johnson got $24 million guaranteed from the Bucs. Fourth-round pick Geno Atkins was one of the five best defenders in the league in 2012, and somehow, the Bengals were even better after he was lost to a torn ACL last year.

It was all enough to get people wondering why Zimmer hadn’t been tapped for a head-coaching job. Finally, this offseason, the Vikings gave him the opportunity — one week after Newman’s proclamation. Minnesota’s defense has been a generous bunch in recent years. It was 27th in DVOA a year ago, including its second bottom-three finish against the pass in the past three seasons. That’s what Zimmer was brought in to change.

As with any new coach, there were questions going into Week 1 about what exactly Zimmer’s defense would look like with his new personnel in Minnesota. We got our answer Sunday: The Vikings held the Rams to just six points and 318 yards. Excitement over Minnesota’s opening-week performance comes with the caveat that it played Shaun Hill, Austin Davis, and the Rams, but there was still plenty to take away from how the Vikings played. While his defenses in Cincinnati started few first-round picks, his starting 11 last week had five, including four from the past three years. The Vikings have a lot of young talent, and this week, it looked like young talent playing in a Mike Zimmer defense.

Along with the change at the top, the Vikings added as much new blood on defense as anyone this offseason. Their biggest splash was actually an in-house move, when they gave defensive end Everson Griffen a five-year, $42.5 million deal (with $19.8 million guaranteed). It was a huge chunk of money to hand a player with 13.5 total sacks in the past two seasons, but with Jared Allen previously entrenched as the team’s right defensive end, Griffen’s work was always going to be limited. At 26, with limited mileage and a ridiculous amount of talent, it actually made a lot of sense.

Griffen had two sacks Sunday, but that overstates how good he was as a pass-rusher. For the most part, he had a quiet game, largely because he was dealing with Jake Long, who played well and looked to be fully healthy after tearing his ACL last year. Long isn’t the player he previously was, but Griffen will have easier days.

Linval Joseph was the other half of Minnesota’s two big moves along the defensive line, and he did not disappoint in his first game as a Viking. Joseph had one sack and was generally a pest all game. After playing a lot of 3-technique tackle with the Giants (lined up on the outside shoulder of the guard), Joseph was almost exclusively a nose on Sunday, a move that points to what Zimmer has recently done with a lot of his interior linemen. Domata Peko, the longtime starting nose for Zimmer in Cincinnati, weighs in at just 305 pounds. Zimmer seems to prefer quickness over bulk. By taking someone like Joseph, a very effective 3-technique, and making him a nose, it gives the Vikings another speed advantage along the line.

The Rams’ receivers make it hard to really judge how cornerback Captain Munnerlyn, the third major addition to the Vikings defense, looked in his debut. Munnerlyn had a cushy job in the Panthers’ secondary last season, but you’d assume he’ll be an upgrade from what Minnesota had in recent years.

Three of Minnesota’s defensive starters were first-round picks in either 2012 or 2013, and one of them had a big game Sunday. Harrison Smith had a very nice rookie year for the Vikings after going with the 29th pick in 2012, but he lost almost his entire second season to turf toe.

Smith looked like he was back to his old self — and then some — this week. He did a little bit of everything for Minnesota. Smith had only one sack, but was about one step from another, and also finished off the game with a pick-six. The Vikings blitzed sparingly, which sounds right considering Zimmer’s tendencies in Cincinnati. The Bengals rushed five on just 18.5 percent of drop-backs last year, 27th in the league according to the Football Outsiders Almanac. When Minnesota did bring extra pressure, though, Smith was usually involved. A healthy Smith is the exact type of player who could not only make the Vikings defense more consistent play in and play out but also give it a playmaking element it hasn’t really had in recent years.

Last year’s pair of defensive first-round picks — Sharrif Floyd and Xavier Rhodes — didn’t do much Sunday, but it’ll be interesting to see how their roles/games expand as the year goes on. The Vikings clearly don’t trust Floyd as a pass-rusher yet. He played 45 snaps and was consistently absent in clear passing situations, but next to Joseph, he should cause plenty of trouble against teams in the run game. An injured groin limited Rhodes’s work, but he should be back for Sunday’s game against New England. He had a promising year as a rookie, and the thought for those optimistic about the Vikings was that an improved Rhodes, Munnerlyn, and a healthy Smith would go a long way in fixing the 30th-best pass defense in the league. The Patriots should be a better test for that than what the Rams provided.

There was a bit of a stir when the Vikings took Anthony Barr ninth overall in this year’s draft. Barr was a 3-4 outside linebacker at UCLA and projected to a similar role in the NFL, but both the Vikings and Zimmer’s Bengals were traditionally 4-3 teams. That created some speculation as to how exactly Zimmer would use him. Well, now we have our answer: He’s going to use him in a lot of ways, and Barr has a chance to be good at all of them.

In the Vikings’ base defense, Barr is playing the Sam linebacker opposite mainstay Chad Greenway. Maybe the most impressive part of Barr’s game Sunday was how adept he looked in coverage. Whether it was playing man-to-man on running backs or taking passed-off crossing routes in zone, Barr looked more than capable for someone who spent most of his time in college rushing the passer.

Barr played defense for just two years at UCLA, transitioning from running back after his sophomore season. Coming into the draft, that was universally viewed as a good thing. His rawness was easily explained, and with the right kind of coaching, a staff could build him into the type of player it needed him to be. That’s what we’re already seeing in Minnesota. Zimmer and his staff have taken a ridiculous athlete without a defined position and turned that into a positive.

Barr has his faults. There’s a good chance he’ll occasionally look lost in coverage, and he can be hesitant in the run game. But he’s so physically talented that he’s going to give the Vikings a lot right away.

This is the first play from a two-play stretch in the fourth quarter that perfectly encapsulates Barr’s rare abilities. That slight hesitation in the run game is here on the first play, but so is the incredible combination of speed and strength. Barr blows up the fullback, clogs the hole, and allows his fellow linebackers to fill and make the play.

On the very next play, we can see what Barr’s ultimate value can be and also what the Vikings’ plan may look like on key downs all season. Barr goes from Sam linebacker to playing left defensive end in a clear passing situation. Minnesota did this a lot Sunday, and it’s a package that could be extremely useful as the season goes on. Barr, Joseph (or Tom Johnson), Griffen, and Brian Robison have the potential to be a nickel pass-rushing group that’s a nightmare to deal with. Whether it’s Griffen or Robison sliding in to play defensive tackle, the Vikings are almost guaranteed an advantage.

Barr’s abilities as a pass-rusher give a new meaning to the term “three-down linebacker” as we typically use it for players in a 4-3, but it makes him no less effective. For a lot of rookies, that sub-package defensive end role would be their only job. For Barr, it’s an extension of what he’s already doing.

Minnesota’s defense isn’t a finished product. Jasper Brinkley is a concern at middle linebacker, and the depth at cornerback is wanting. But with all of this young talent and Zimmer finally at the helm to deploy it, the Vikings can expect to steer out of the DVOA basement.

The Price of Loyalty in Pittsburgh