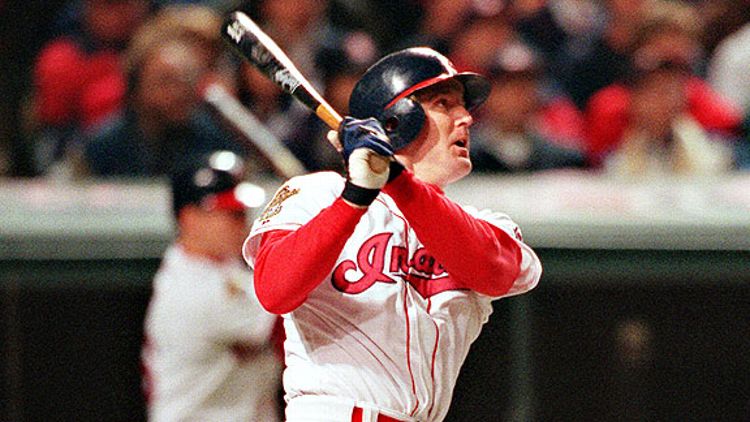 A few years ago, I got a tour of MLB Productions studios in Manhattan. Apologies to Cooperstown, Wrigley Field, or that cornfield in Iowa, but this was the most magical place a baseball fan could ever hope to see. In one end of the office, technicians sat in a row of video bays, cutting tape of old baseball highlights. They had to drag me away from a guy splicing Roberto Clemente highlights. I’ve written about baseball pornography. This was the hard-core stuff.

A few booths away, I found a more modern baseball story being crafted: the tale of the 1995 Cleveland Indians. What a team. Kenny Lofton, onetime-lightning-quick University of Arizona basketball star, was in his prime as a lightning-quick leadoff man. Albert Belle, also at his peak, hit 50 homers that year. A young Manny Ramirez was just harnessing the skills that would make him one of the best right-handed hitters in baseball history. Carlos Baerga offered rare power at second base. Omar Vizquel was a Gold Glover at short. Even 39-year-old Eddie Murray still had something left in the tank.

And then there was Thome. Still a third baseman at this point, he was just easing into his new role as an everyday player. He was 24, and he looked it — still big and strong, but not the Paul Bunyan figure he would become later in his career. Most people would probably sit and stare at Young Manny, or the brutal force that was vintage Belle. A real die-hard might have geeked out over Paul Sorrento or Chad Ogea. All I saw was the baby-faced Thome. He was already good, on his way to being great. He was rising in the baseball world, a player of the 1990s if ever there was one. But in many ways he was Jim Thome the avatar, more than Jim Thome the baseball player.

I felt the same way when I watched his drive off Mark Schlereth’s kid clear the left-center-field wall at Comerica Park on Monday. With that shot, Thome became just the eighth player in MLB history to reach 600 homers, a fitting coda to an amazing career. He deserved every bit of praise that came his way. But I couldn’t help but think of Thome as, more than anything, a symbol. Of Bunyan. Of sweet, sweet Internet comedy. And more than anything, of the era in which he played.

How you think of Jim Thome, the baseball player, says a lot about your view of absolutes. A hitter who posts a lifetime on-base percentage of .403, ranks with Willie McCovey and Willie Stargell offensively and with Johnny Bench and Derek Jeter for overall value deserves a plaque in Cooperstown, even before we get to the 600 homers.

But it’s not that easy for some people. Not after the steroids era made fools of trusting fans and sportswriters who wanted to believe that home run records could be broken, re-broken, and then broken again under what they considered normal circumstances. By the time the Mitchell Report and Kabuki Congress Theater had crashed our consciousness, there were new guidelines for evaluating baseball players. If you followed the game and had absolute trust in players before, now you could harbor absolute distrust. If a player hit a ton of homers somewhere around 1992 to 2005, he was either a cheater, or just someone who wasn’t all that great.

There’s value in comparing baseball players to their historical peers, of course. As I’ve written before, players in Babe Ruth’s era played against the best white guys that a non-existent scouting system could find; players in Sandy Koufax’s era threw from sky-high mounds in cavernous ballparks. We’ve either come to terms with those conditions, or we don’t even think about them. Even if Ruth and Koufax’s contemporaries benefited from skewed talent pools or skyscraper mounds, though there was only one Ruth, and only one Koufax. We embrace greatness, even when the game is rigged in great players’ favor.

So why not digest the accomplishments of modern sluggers on similar grounds? Because players cheated, we’re told. It wasn’t Ruth’s fault that the country was rife with institutional racism at the time, or Koufax’s fault that he pitched at the most favorable time for pitchers since the Dead Ball Era. But players who were found to have taken performance-enhancing drugs, conventional wisdom goes, should be stripped of their accomplishments, of their esteem with the game, and their shot at a place in the Hall of Fame.

Even this stance is fraught with problems. Major League Baseball didn’t implement its Joint Drug Prevention and Treatment Program until the Spring of 2006. Before that point, many substances that may have enhanced performance, offered a placebo effect, or done not much of anything were not technically banned by baseball. Even some of the players most hounded by the stigma of PEDs never tested positive for any banned substances during their playing days. You might think all of that is splitting hairs. If it looks like a duck, and quacks like a duck, it probably shot itself in the ass with Jose Canseco Wacky Sauce like a duck.

Here’s the bigger issue: Where do we draw the line? Do we paint every slugger of the Steroids Era with the same guilt-tinged brush, even if they’ve never so much as been rumored to have taken something illicit? Does throwing the book at Barry Bonds and Mark McGwire and Sammy Sosa mean that all their peers are also disqualified from the Hall, and from recognition for their accomplishments?

We can take this argument pretty far too. Plenty of pitchers were linked to PEDs, either through admissions of guilt or via the Mitchell Report. Does that mean we should assume that every pitcher of the Steroids Era may have been guilty too? Greg Maddux and Tom Glavine might have been skinny and couldn’t reach 98 mph in a 747; but guilt is guilt, right?