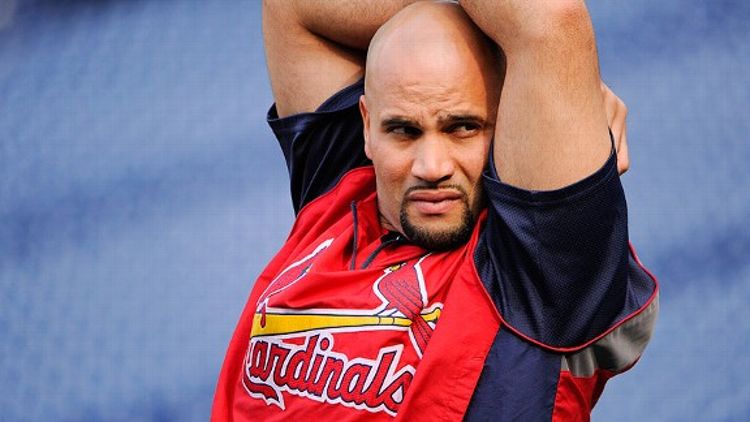 Baseball is not basketball.

When a gingham-shirted LeBron James told the world he was leaving Cleveland to go play for the Miami Heat, two franchises — two entire cities — were irrevocably changed. The Cavaliers went from fringe title contenders to odds-on favorites for the no. 1 overall pick in the next draft. Cleveland reacted with seething anger, burning LeBron jerseys by the thousands and reaffirming their status as the most tortured sports city in America. In Miami, we got LeBron and his new teammates Wade and Bosh, standing on a catwalk wearing Heat home whites, smiling for the cameras, tacitly declaring their supremacy. They didn’t win in year one, of course. But future rings seem inevitable.

Albert Pujols is not LeBron James. The Angels are not odds-on World Series favorites. And the Cardinals should be damn good in 2012.

Let’s start with the man himself. Pujols is the proud owner of a 10-year, $250 million contract from the Angels. Only Alex Rodriguez has ever signed a richer contract (twice). From a pure baseball standpoint, this is probably an overpay.

A brief primer on how to value a player: A replacement-level player is the kind of bench jockey or Triple-A veteran who’s readily available and does nothing to improve a major-league team’s win total. A player worth one or two wins above replacement level has some value, but he’s typically a better bench player or marginal starter. A five-win player is an All-Star. An eight-win player is an MVP candidate.

The cost of a marginal win on the open market is about $5 million right now. Players tend to get a little worse every year after they pass their prime. Plus we have to account for inflation, since the prices paid for players pretty much always trends upward. With all those factors considered, Pujols would need to be 6.5 Wins Above Replacement in 2012 to make the deal worthwhile for the Angels. (Given the Halos gave Pujols a full no-trade clause, this really is the Angels’ burden, since sneaking out of the deal wouldn’t be easy.) A 6.5-win player would be just a notch below the game’s superelite, not quite an MVP candidate, but still up there. In 2011, 6.5 WAR would have made Pujols the 15th-most valuable position player in baseball.

Let’s assume that Pujols is in fact the age he says he is, despite some rumblings within the game that he might be older than his listed age of 31 (32 next month). Studies by Bill James and numerous other baseball scholars have found that players tend to peak in their mid-to-late 20s. There have certainly been plenty of outliers on that front, from Barry Bonds (suspicious circumstances) to Jamie Moyer (a Satchel Paige-like pitching freak). But more often than not, once you hit your 30s, it’s not going to get any better from there. Pujols went from 9.1 WAR at age 28 to 9.0 WAR at age 29, 7.5 at age 30, and finally 5.1 WAR at age 31 this past season. That’s a scary trend for a team that just shelled out $250 million.

But here’s the thing: Players don’t produce based on bell curves, and they’re not predictable, stat-generating robots. A fractured wrist caused Pujols to miss 15 games, and may have sapped his power for considerably longer than that. With the June injury coming after a slow start, Pujols had no chance to finish the year with his usual numbers.

It’s entirely possible that a healthy Pujols will bounce back in 2012 with a season worth around 6.5 wins (or more) to the Angels. By contrast, LeBron James was worth nearly 26 wins to the Heat last season, per ESPN’s John Hollinger. If you want to use the simplest math possible, Pujols adding six or seven wins to last year’s 86-win Angels team could make them a 92- or 93-win team in 2013. If baseball were basketball, and one superstar could single-handedly turn a terrible team into a killer, we’d be talking about the Angels looking good for 100-plus wins right now. But that’s just not how it works in baseball, where no one player has anywhere near that kind of impact.

Can the Angels then be World Series contenders in 2012? It’s certainly possible. The Angels’ runs scored and runs allowed totals last season suggested a team that, all things being equal, should have won 85 games. (The Halos also have a track history of outperforming their expected record, having done so eight years in a row.) This is a team that featured two premium starters in Jered Weaver (6.4 WAR) and Dan Haren (5.6 WAR) last season, with a solid third starter in Ervin Santana (3.2 WAR). That rotation just got a lot stronger, with news that C.J. Wilson (5.9 WAR, higher than Pujols) has signed a five-year, $77.5 million deal to play for his hometown team. Wilson’s got some command issues and less of a track record than some of the game’s other top starters. But he certainly gives the Angels rotation a big boost.

There are still some holes on the roster. The bullpen’s a little thin after closer Jordan Walden and lefty setup man Scott Downs. Vernon Wells is terrible, having posting a .248 on-base percentage last year that was one of the worst for any starting outfielder in baseball history. Third baseman Alberto Callaspo is likely to regress after a strong, out-of-nowhere 2011 campaign. Bobby Abreu and Torii Hunter are getting old, and less productive. This is a good but flawed team.

On the other hand, the Angels upgraded their catcher offense by trading for Chris Iannetta. They have attractive trade chips in Mark Trumbo and Kendrys Morales, the two slugging first basemen now seemingly out of a job with Pujols in town. Super-prospect Mike Trout could make a significant impact at some point next season. And the Angels should field another strong defensive team and do whatever it is that Mike Scioscia-managed teams do. As an added bonus, they poached Wilson from the rival Rangers, pulling a reverse-Mike Napoli on them by transferring a very good player from one roster to the other.

The Rangers should still be loaded, the Yankees, Red Sox, Rays, and Tigers project as good-to-excellent teams, and more moves lie ahead for AL contenders. The Angels will be very good, and certainly in the mix with those other teams. Just don’t plan the parade yet.

The same word of caution that applies to the Angels should foster some optimism in St. Louis. The Cardinals just won the World Series. They did it without staff ace Adam Wainwright. They did it with old retreads Ryan Franklin and Miguel Batista anchoring the back end of the bullpen early in the year. They did it with Pujols playing worse than he ever had before. With playoff hero Allen Craig likely to crash the lineup (and Lance Berkman moving to first base), this should still be a strong offense. The Cards also suddenly have a big chunk of disposable income, which they could use to do anything from pursue Prince Fielder (the last elite free agent on the market), go after Jimmy Rollins to play short, or trade some of their pitching depth for a big-ticket player whose salary might be weighing on his current team.

Just as you can’t plan a parade just yet in Anaheim, you shouldn’t discount a potential repeat run for the Cardinals. One player can certainly nudge a team toward a championship. But he can’t guarantee it. Not even close.

Live! From Baseball’s Winter Meetings
Breaking Down The Baseball Hall of Fame Ballot
Reyes’ Deal Shows That The Marlins Aren’t All Talk