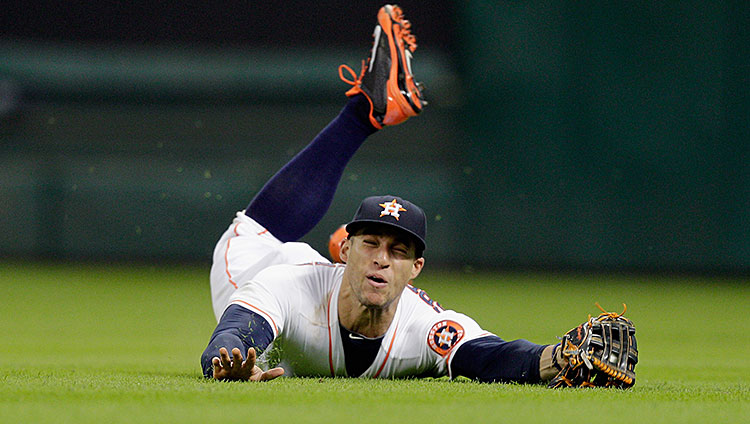 Baseball is evolving into a game in which fielders are becoming increasingly unnecessary. Over the past 30 years, we’ve learned that pitchers don’t have a ton of control over where the ball goes when it’s hit, and the most reliable way to get outs is strikeouts. On the other side, we’ve learned that, above all else, the most important thing for a hitter to do is avoid making outs: hitters run deep counts to seek out walks, and take huge swings so they can hit the ball harder and farther.

The result? Strikeout rates are rising as pitchers seek them out more and hitters fear them less. The potential for a hard line drive or an extra-base hit makes it worth it to swing for the fences, even with two strikes. An out’s an out, whether it comes in the form of a strikeout or a weak grounder to second — so “go big or go home” is an increasingly common two-strike approach. Aesthetically, it’s a troublesome trend. The three true outcomes — strikeouts, walks, and home runs — are the only plays that don’t involve fielders or base runners, which places athleticism at less of a premium. When people snark on baseball players for not being real athletes, that’s what they’re talking about. And if you’ve seen Ryan Howard run the bases, or watched Mark Reynolds struggle to operate a first baseman’s mitt the way your dad struggles to operate Windows 8, it’s hard not to see the point.

Then there’s Houston Astros outfielder George Springer. Unlike most players who produce mostly walks, strikeouts, and home runs, Springer plays the game with a compelling level of athleticism.

Springer strikes out a lot. His 32.8 percent strikeout rate is third in MLB this year among qualified batters, and the three guys right behind him — Adam Dunn, Mark Reynolds, and Ryan Howard — are all plodding 1B/DH types whom we expect to either strike out or hit into a shift seven or eight times every 10 at-bats, because home runs are so rare.

Springer’s .245 batting average and stratospheric strikeout rate might lead you to believe that the 24-year-old rookie with two months of big-league experience is in over his head. We’ve seen other talented young outfielders crush minor league pitching, then strike out a third of the time (or close to it) in the big leagues before being sent back like an overcooked steak: Aaron Hicks, Jackie Bradley, Domonic Brown, and even Mike Trout once upon a time.

Springer’s not overmatched. He’s a guy whose strikeouts you live with because they might be the only flaw in his game. Springer’s a pretty big dude — he’s listed at 6-foot-3, 205 pounds — but he doesn’t look it. He’s got square shoulders, lean legs, and an upright stance that make him look like a possession receiver in the batter’s box. Those strikeouts come from a long, powerful swing — a crew cab version of Mike Trout’s swing or the human version of Hunter Pence’s. Either way, he doesn’t get cheated.

After a mid-April call-up, Springer took a while to settle in, but once he did, we realized how fortunate we were that his name rhymes with “dinger,” because he hits a lot of them. In the month of May, Springer hit 10 home runs and slugged .647. Exactly half of his hits in May went for extra bases.

He also gets on base a lot, despite his low batting average. Springer has walked in 10.3 percent of his plate appearances, a good if not mind-bending total that puts him ahead of Jason Heyward and Jayson Werth, two athletic right fielders who are known for their patience.

Despite the walks, Springer’s not a passive hitter. If he gets his pitch, he’ll try to kill it, no matter when it comes in the at-bat: Of his 12 home runs so far, five came on the first pitch.

Of course, the bat isn’t the whole picture with Springer. Part of him looking like a possession receiver is that he runs like one too. He stole 85 bases in 101 attempts in 284 minor-league games, but he has only stolen one in three attempts in the bigs. He might not steal 45 bases in a season like he did last year, but you’d expect him to run more eventually.

One of the underrated fun things in baseball is when a team calls up a center field prospect, even though they have an established center fielder already. They leave the veteran in center and stick the youngster in a corner, and very little falls between them. The Phillies did this with Aaron Rowand and Shane Victorino, the Yankees did it with Curtis Granderson and Brett Gardner, and the Astros are doing it now with Springer and Dexter Fowler, and boy, does Springer play right field like a center fielder.

He’s got the diving catch to rob extra bases down, as well as the curl to the gap to cut off a double there.

There’s a lot to like about the first real product of the Houston rebuild, from the power, to the athleticism, to the fact that he wears his socks pulled all the way up to his knees. He already might be the best position player on the Astros — with 1.0 WAR, Springer trails only Fowler and Jose Altuve — and the best is yet to come.

Jalen and Jacoby: Recapping the NBA Finals and Getting Excited for the Draft