Who Won the Scene? Samuel L. Jackson vs. Everyone Else in ‘Jackie Brown’ 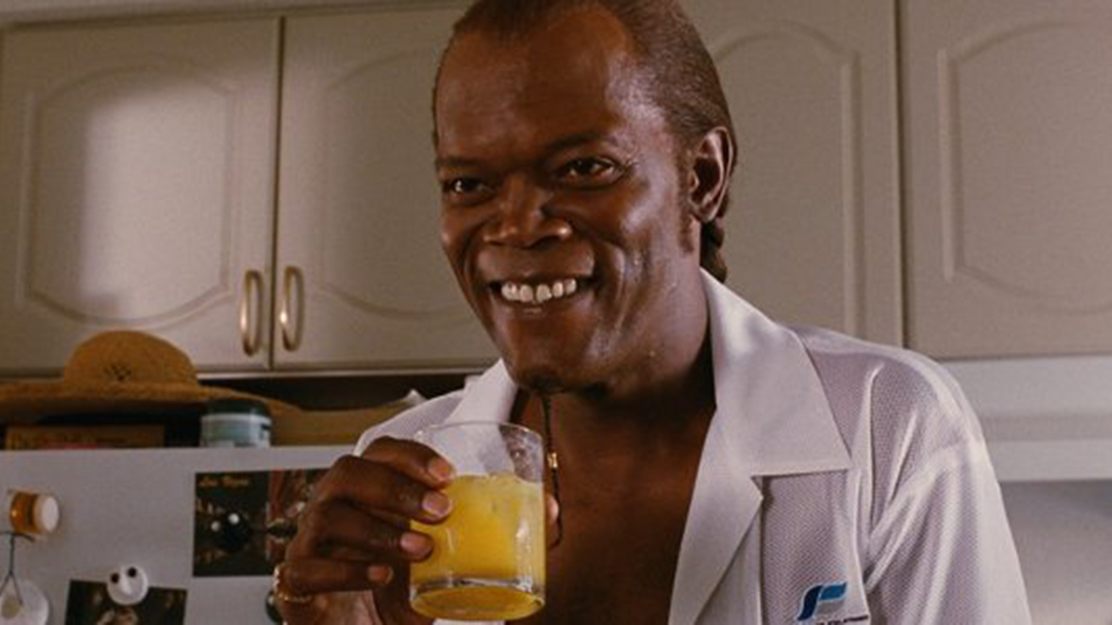 Welcome to Who Won the Scene, wherein a Grantland writer examines a classic film moment in which two or more actors enter a kind of figurative thespian Thunderdome and asks: Which one leaves? Today, Jason Concepcion looks back at Jackie Brown and wonders if anyone topped Samuel L. Jackson.

Jackie Brown is often referred to as Quentin Tarantino’s most overlooked mature movie. I’ll go out on a limb and say those two are related. If you had never seen a Tarantino movie and someone gave you the choice of watching (a) a movie that ends with the orgiastic machine-gunning of the Nazi high command, (b) a movie that features a solemn Christopher Walken monologue about keistering a timepiece to keep it out of the hands of the Viet Cong,1 (c) a movie about a sword-wielding female assassin on a mission of revenge, or (d) a movie about a middle-aged flight attendant, which one would you pick?

Jackie Brown takes all the adrenaline-needle-to-the-sternum, fractal-narrative structure, and stylistic bombast and pares it down to the bare bones of the Tarantino style: interesting casting choices that often act as callbacks to specific films and genres,2 and lots of great dialogue. There are times when I think it is my favorite Tarantino movie.

The setup for this scene is that Jackson’s Ordell, an arms dealer, has just bailed his associate, Beaumont (Chris Tucker), out of lockup with the intention of killing him before he can talk to the cops. The scene is basically a fun-house mirror of the Pulp Fiction opener in which Jules and Vincent converse over an open car trunk about how they should have shotguns, before walking into the hotel and up to the room where Frank Whaley and friends are hiding out with the valise containing the mysterious glowing material. In Jackie Brown, the two characters are walking and talking on the way down to the car from the hotel room, and when they get there — cue patented camera shot from the open car trunk — Jackson actually does have a shotgun.

Tucker is in only one scene in Jackie Brown — taking up a grand total of about five minutes of screen time. It’s a wonderful bit of Tarantino meta-casting, functioning as a wink and a nod toward Tucker’s fast-talking chroniced-out Friday character. Over that five minutes, Tucker shows a range beyond the familiar weed jester persona of his more famous roles. My favorite moment is how, when Beaumont is faced with having to get into Ordell’s trunk, Tucker gradually downshifts from his trademark machine-gun delivery comic wiseassness to grudging acceptance, and finally defeat.

Still, I give this round to Jackson. Ordell isn’t necessarily the smartest guy in the room, but he is the most cunning; he’s able to smile and joke, with that smile touching every part of his face. Meanwhile, he’s actually trying to lure a dude who thinks he’s a friend into the trunk of his car so he can kill him.

Pam Grier plays the eponymous Jackie Brown, a down-on-her-heels flight attendant for a third-rate airline who scrapes together money on the side by surreptitiously moving cash for Ordell. Jackie gets pinched by the ATF3 coming back from Cabo San Lucas with a bundle of Ordell’s ill-gotten loot, of which she was very aware, and an inconvenient bag of coke, of which she was totally oblivious.

Ordell, as we have already seen, is not one to brook potential loose ends. Following the blueprint he used with Beaumont, Ordell bails Jackie out of jail, then lays in wait outside her home. After bail bondsman Max Cherry (Robert Forster) drops Jackie off at her apartment, Ordell puts on a pair of leather driving gloves, slips his nickel-plated derringer into his pocket, saunters up to Brown’s door, and knocks.

Jackson plays Ordell straight-up predatory in this scene. His smile is less “I’m your friend” and more vulpine. Ordell keeps doing totally-not-creepy shit like dimming Jackie’s halogen floor lamp4 when she goes to the kitchen to make him a drink, then dimming it again after she turns it back on.

We already know that Jackie suspects that Ordell is there to kill her, and tension in the scene is derived from having no idea what Jackie is going to do about it. Grier plays Jackie aloof almost to the point of being oblivious. She brightens the aforementioned lamp, turning her back on Jackson to light a cigarette. All the while, she’s nonchalantly answering his questions about the feds and what she told them about Ordell’s business dealings. Then he turns the lamp down again and puts his hands around Jackie’s neck.

Then she presses Max Cherry’s revolver against Ordell’s balls.

Writing great dialogue is really hard. Writing great dialogue for characters who aren’t eloquent seems like performing a magic trick. Such is the case with De Niro as Ordell’s right-hand man, the stoner jailbird Louis. In 1997, De Niro was in the thick of his last great run of roles: Casino and Heat in 1995; Cop Land,5 Wag the Dog, and Jackie Brown in 1997; and Ronin in 1998.

Seeing De Niro play the follower is rare. Seeing him play a high-on-weed hump is like spotting a mystical unicorn. Most of what he does in this movie is body language — slumped shoulders, grimaces, and grunts, or a series of shrugs while hunched over a bong that somehow manages to convey who Louis is. In an interview with Charlie Rose to promote the movie’s release, Tarantino said about De Niro: “He deserves his reputation as possibly the greatest actor of his generation.”

In De Niro and Jackson’s last scene together in the film, Louis has just shot surfer girl Melanie (Bridget Fonda) in the parking lot of Del Amo mall after being driven to the breaking point by her acidic carping about where he parked the car. To make matters worse — you know, worse than killing in broad daylight — Louis does not realize he is carrying a shopping bag that’s a few hundred thousand dollars light.

I love the way De Niro goes from put upon and apologetic about having to shoot a woman in a parking lot to insulted that Ordell could suspect him of stealing. When Ordell checks the clip of Louis’s gun, De Niro says, “What’s that gonna tell ya? I could’ve taken two out already,” like a husband trying to explain why it’s totally normal that he’s sneaking into the house at 2 a.m. as his significant other checks his text messages.

The Pop Star Index: A Scientific Ranking of the 20 Least Embarrassing Male Artists