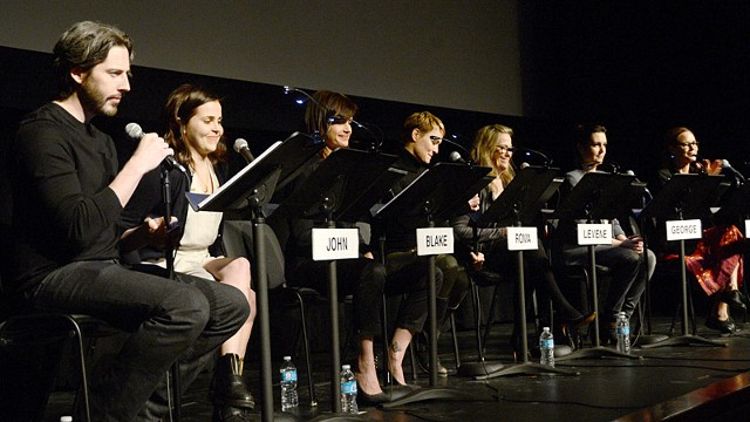 “The melancholy of the blues and the immediacy of jazz … his characters are hard-hearted and hardheaded, so I thought Women can do that.” That was how critic and curator of the Film Independent at LACMA Film Series Elvis Mitchell wryly described David Mamet’s Glengarry Glen Ross before introducing the conceit of last night’s Live Read. Mamet’s terse, rhythmic story tracks four real estate salesmen (and scam artists) desperately working through the night on the eve of a robbery. The Live Read, a semi-regular event at LACMA, is a quiet, clever, only-in-L.A. happening where the city’s access to celebrity and artists is actually used for good. Here’s the layout: Typically, Film Independent’s artist-in-residence and director, Jason Reitman, reads the stage direction, a screen behind the cast projects scenes from the movie but with the characters erased from the mise-en-scène, and the cast simply read from scripts placed in front of them on easels. Mitchell’s idea, shepherded and executed by Reitman, was to subvert the sulking machismo and grandiloquent gutter talk of Mamet’s characters with a gender swap. It basically worked in that way, but mostly because the cast Reitman assembled was a shockingly accurate rebuttal to the 1992 film adaptation directed by James Foley. Here was the lineup:

Trust me when I tell you that there were dead ringers on display last night. The cast had been announced in full two weeks in advance, except for the role of Blake, the deliverer of Mamet’s iconic “Always Be Closing” speech, one of the most quoted and misinterpreted scenes of exceptional assholery in recent history (which, notably, was added only for the film version). When Reitman introduced Gugino the crowd seemed to understand the synchronicity instantly — Gugino’s dark beauty; her sharp, deep voice; the steely command. The ABC speech might be the most memorable moment of Baldwin’s career, so approaching it requires someone with more than a little presence. And Gugino came close — the audience trilled with glee as she seethed the big bromides, “Fuck or walk,” “Your name is ‘you’re wanting,'” “The good news is you’re fired.” But it wasn’t the infamous scenes that carried last night’s readings, it was the smaller gestures that worked. Lynskey’s Alan Arkin impression was quietly virtuoso, all stumbling and bumbling, hemming and hawing, whispers on whispers of self-doubt. Likewise Bello, who didn’t transform Ed Harris’s furious, aggrieved Moss into a frustrated housewife or scorned woman. She was just Moss — no commentary, just anger and indignation. And she was amazing, edging a hard Chicago accent onto every phrasing. “The leads! It’s the fuckin’ leads!” she moaned. Before the reading, Bello seemed like the least interesting cast member and Moss the least interesting character, but she made him funny and tough and pathetic and somehow more central to the story.

Jack Lemmon was 67 years old when he played The Machine, the heartbreaking soft-shoe operator at the center of Glengarry. It’s one of his best performances, a master class in veiled aggression and whimpering futility. The great Catherine O’Hara is only 58, but she dowdied herself in glasses and a shawl and crippled her posture. Her voice was hushed and bruised. O’Hara is one of the funniest comic actresses ever, and her speedy delivery is perfect for the part, but it’s essentially a Willy Loman reflection. She could only be funny at Levene’s blustery moments, such as after a big sale near the story’s end, and only because we know how full of shit he is. Catherine O’Hara is good at being full of shit.

Robin Wright is a thoughtful, beautiful, respected Hollywood actress, but six months ago the part of Ricky Roma might have seemed a little too big, a little too brazen for her. Then House of Cards and her role as scheming political wife Claire Underwood and her alien–warrior–Kate Gosselin–on–Creatine haircut happened. Now Wright is at the forefront of many people’s minds, a swaggering, domineering mover and shaker. So, basically, Ricky Roma. Wright wore a black mock turtleneck, dark denim, and a pair of motorcycle boots — the severe uniform of a badass. And she was. The Roma part is small, a starburst in a sky of dim bulbs, but he’s important and loud. Wright didn’t exactly play him that way; she opted to go harsh and direct but without the insane, teetering-on-Hoo-ah intensity that Pacino used more than 20 years ago. It’s a signature part for Pacino, who’s handled other roles in the revivals of the play over the years. Wright made it her own.

Mae Whitman, the youngest member of the cast, is known for her forthright and harsh manner and devilish grin. You know, like a young Kevin Spacey, which is exactly who she played. She crushed the most memorable moment of the tense final act: “Will you go to lunch? Go to lunch. WILL you GO to LUNCH?!” she barked at Lynskey. She also withered appropriately. When Roma strips Williamson of his dignity after a blown sale, it’s one of the few times we explicitly hear about manhood. Here’s the invective:

When Wright burned over “Who ever told you that you could work with men?” a few audience members snickered. Wright didn’t crack a smile.

Q&A: The Jeselnik Offensive's Anthony Jeselnik on His New Show, His Stint With Jimmy Fallon, and Trying to Hit a Home Run Every Time