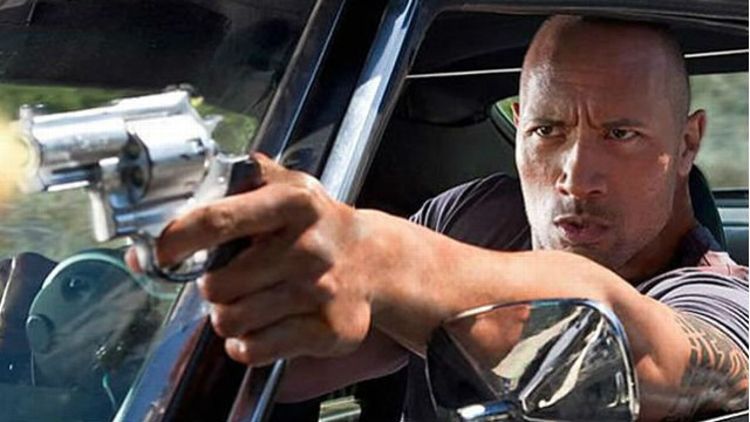 There’s a moment in Snitch that, if the world were different, you’d probably miss. But given all the talking we’ve been doing about guns, it stands out. Dwayne Johnson stands in the middle of an ammo shop. The camera spins around him the way cameras do when they want to convey a sense of being overwhelmed. You don’t see him purchase the shotguns he uses a few scenes later in a tense road-chase sequence. But you sense the magnitude of what he’s about to do rising up around him, that he’s waist-deep in stress.

What Johnson’s character — a Middle-American construction company owner named John Matthews — is about to do is almost single-handedly bring down a Mexican drug cartel. His son, Jason (Rafi Gavron), was given a 10-year sentence for accepting a shipment of ecstasy from a buddy. He refuses to concoct evidence against someone else for a reduced sentence — that how the mandatory-minimum drug laws work. So John pleads with an opportunistic U.S. Attorney (Susan Sarandon, who’s best ruthless) to let him manufacture the setup instead. She agrees, half-skeptical, half-turned on.

And soon John is infiltrating a local drug warren, run by — who else? — Michael K. Williams (The Wire) and using his brand-new tractor-trailers to move drugs from El Paso (courtesy of Benjamin Bratt) all the way back up to what the license plates say is Missouri. He does all of this with some light DEA assistance in the form of Barry Pepper — who tames his shrubby goatee with a rubber band — and some heavier lifting from an ex-gangsta, ex-con named Danny Cruz (Jon Bernthal), who works for John’s construction company and who John drags back into a life he swore he’d never return to.

Snitch runs close to two hours, and it’s a credit to Summit Entertainment that they didn’t reduce it to 90 minutes of Mexican drug loons trying to run John’s truck off the highway. Justin Haythe wrote the movie with Ric Roman Waugh, who directed. They’ve based the film (loosely) on a depressing Frontline exposé, from 1999, that was also called Snitch, which laid out the vertiginous downside of mandatory-minimum anti-drug laws. Waugh is a former stunt coordinator, and there’s a hefty amount of action here. But one reason the movie works as well it does is that there’s some filmmaking, too. The atmosphere is reminiscent of Alejandro González Iñárritu and Michael Mann, just dustier and more dolorous. Waugh simply forgoes the transcendent grandeur (and occasional ponderousness) of either of those two directors. Yet it’s a drama that also seems to care as much about chases and shootouts as it does dramatic tension and good acting. It lets us appreciate that John — and by extension, Danny — are caught in familial binds, all because one kid signed for a box of pills.

The movie is almost as depressing as the Frontline piece. Even if John succeeds, he’ll have negatively altered so many lives, caused so many highway accidents, and irreparably pissed off so many levels of the narcotics industrial complex that you sometimes wonder whether Jason wouldn’t be better off where he is. But the new bruises and cuts that appear on his face with each new family visit confirm that that’s not a good idea, either. There are no good options, unless you’re the U.S. Attorney.

Through it all, Johnson is required to look like he’s in over his head and, trying to shoot out a car way up from the cab of a speeding truck, he often does. The posters have him in a tight T-shirt, his arms bulging and oiled with sweat. It’s like Summit is trying to sell us one of Nicolas Cage’s February stink bombs, to which all you can say is, “Good luck with that.” Snitch is actually one of the rare Johnson movies to seduce you into ignoring how much larger he is than everyone around him. He might not be enough of a serious actor (yet) to spend an entire movie using none of his charisma — he seems on edge without it, like a man who hasn’t had a drink in a week — but he does manage to make himself seem appropriately, fascinatingly life-size.

As he stands in that gun shop looking overcome with uncertainty, you can feel the emphasis being placed on a different aspect of the shoot-em-up. It’s as if Johnson is about to move reluctantly through the looking glass, from an action-thriller to the one place these movies are often too macho or too cavalier to admit they already are: the action-tragedy.

Five Questions on American Idol: This Is for All the Awkward Turtles Out There