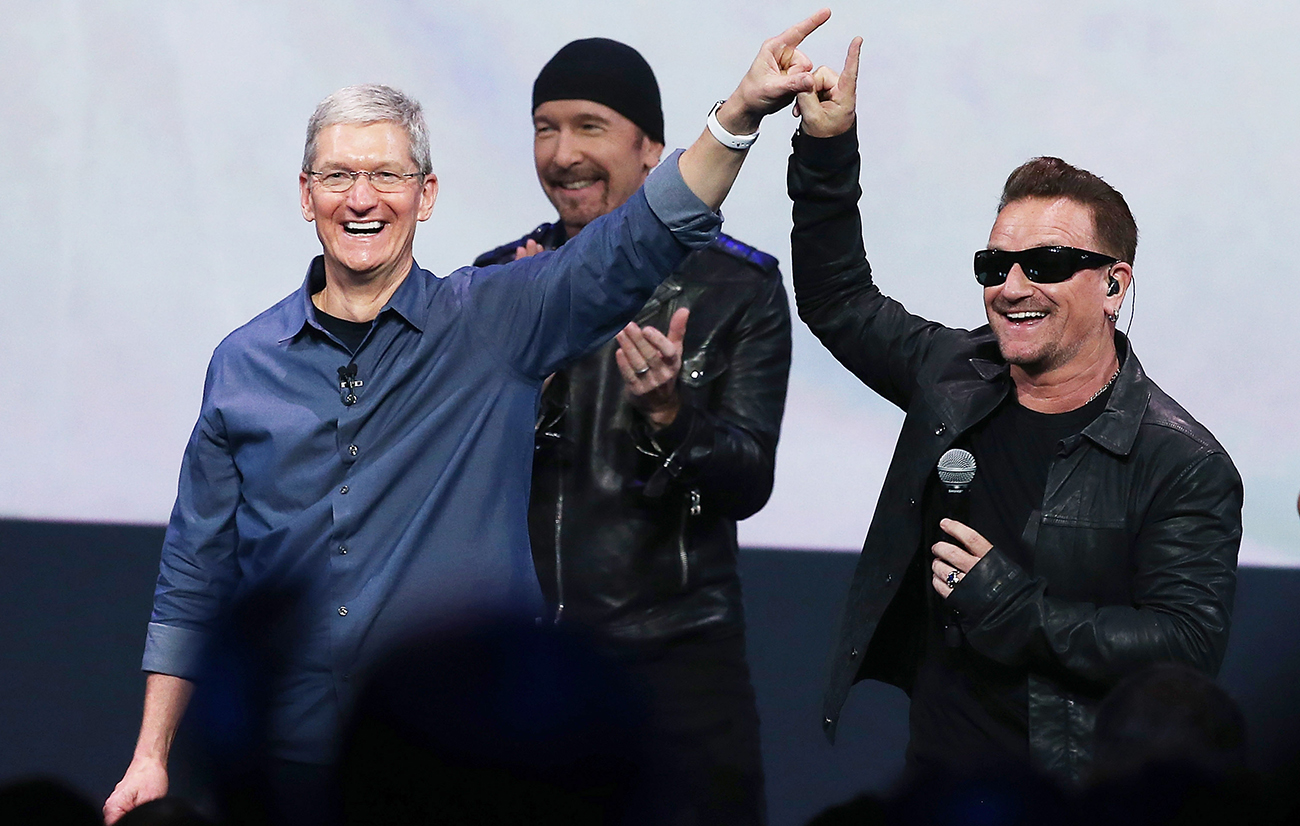 1. I check in with new U2 records exclusively for those majestic “Bells of Rhymney” guitar chimes, and they don’t appear on Songs of Innocence until two-thirds in on the fourth track, “Song for Someone.” Elsewhere, the Edge is either obscured or relegated to generic, “Elevation”-style “punk” licks. The best part of this album is the opening 18 seconds of “Cedarwood Road,” where Edge is finally afforded some space to be his echoey, jangly self before Bono and an orchestra of damp keyboards barge in and wreck everything. I get that we should’ve expected U2 to make an edgeless album. But Songs of Innocence is Edge–less.

2. “Cedarwood Road” refers to the street where Bono grew up. It’s one of several references to Bono’s past littered throughout the record. (There are also songs that appear to be about his mother, father, and wife.) Songs of Innocence will be described as an “intensely personal” album, but it’s really only personal for Bono. Was this originally a Bono solo LP that Edge, Larry, and Adam were invited to record overdubs on during the eleventh hour? If that becomes a credible conspiracy theory, I’m already 80 percent persuaded.

3. How many people were moderately curious to check out the new U2 album forcibly inserted into their iTunes library, and then recoiled when they saw that the first track was called “The Miracle (of Joey Ramone)”? Every U2 fan knows Bono is truly full of shit when he waxes rhapsodic about Joey Ramone or Joe Strummer (whose band the Clash inspired the pop-reggae throwaway “This Is Where You Can Reach Me Now”). Referring to two beloved and altruistic rock icons is clearly intended to give Bono cover when he’s at his most megalomaniacal, like when a politician refers to “Mike the Autoworker” or “Christine the Schoolteacher” while trying to pass himself as the nation’s savior in his stump speech. Songs of Innocence is not driven by the example of Joey Ramone; it’s in the mold of Klaus Kinski’s character from Aguirre, the Wrath of God.

4. I should add that, musically, “The Miracle (of Joey Ramone)” is like if Gary Glitter recorded a State Farm commercial.

5. At least Songs of Innocence isn’t the old-guy, trend-chasing pop record that many people expected and nobody wanted to hear. That said, if there isn’t an Avicii remix of “Iris (Hold Me Close)” by Halloween, I’ll eat my VHS copy of PopMart: Live From Mexico City.

6. “It’s a very unusual emotion I’m feeling right now. I think it’s called humility. The whole year’s been humbling — going back to scratch, reapplying for the job. What job? The best-band-in-the-world job.” That’s Bono at the 2001 Grammys explaining why his band would put out a new album for free in 2014. Bono believes being “the best band in the world” still matters, though he understands that the usual ways of attaining that status (artistic excellence, selling a lot of albums, assuming a central position in pop culture, etc.) are neither available nor realistic for a 54-year-old rock star. So, instead of applying for the job, U2 simply moved into the office, set itself up at a desk, and acted as if it were already hired.

7. There are two crucial differences between how the U2 record was released and how the Beyoncé record was released, and both diminish the U2 record. First, you had to pay to hear the Beyoncé record. It preserved ownership as a still-viable concept for music consumers. Now, it’s true that Beyoncé outsmarted her fans and basically tricked them into buying music in order to access what they really wanted. (More on that in a moment.) Nevertheless, the Beyoncé release involved a traditional transaction of music for money. U2, however, just made its album available to everyone for nothing. That’s not really ownership; it’s really an obtrusive form of streaming. When everyone owns something, nobody owns it. If you’re a Beats subscriber, you were “gifted” this album twice. Congratulations, you were also gifted the latest Buckcherry EP and a million other albums you don’t want and will never listen to.

8. The second difference is that Beyoncé was able to harness the power of social media in order to help line her pockets. Buying her record enabled people to talk about it on Twitter, which was arguably a more valuable commodity than the actual music, because people love talking about Beyoncé on Twitter. ZOMG! PERFECTION! BOW DOWN! Beyoncé is like The Wire of pop stars — a commendable institution that her fans have ruined by expressing their fandom in the most obnoxiously histrionic fashion imaginable. Any day that Beyoncé does something on television is tied for the most annoying day to be on Twitter. But, again, this is a positive for Beyoncé. Meanwhile, talking about the new U2 album is like live-tweeting episodes of NCIS.

9. The best tracks on Songs of Innocence, in order of goodness: “Cedarwood Road,” “Raised by Wolves,” “California (There Is No End to Love).” I suspect, over time, that “Raised by Wolves” will become my go-to track. It grows on me with each listen. The chorus reminds me of War. It’s supposedly about a car bombing, but it’s not a rebel song — it’s a relatively rocking standout placed in the midst of a corporate transaction.

10. U2 is the first band I ever loved. To this day, I enjoy even its bad albums. Songs of Innocence isn’t a bad album, exactly, but it’s among U2’s bottom five records. I think I like it better than All That You Can’t Leave Behind, but not as much as How to Dismantle an Atomic Bomb. (See point no. 1 about the Edge’s guitar chimes.) It’s more consistent than Pop, but it doesn’t reach the high points (i.e. “Unknown Caller” and “Magnificent”) of No Line on the Horizon. It justifies its own existence, but just barely.

11 . At what point will U2 regard new studio albums the way Apple looks at the iPod Classic? U2’s previous tour grossed $736 million. I wouldn’t be surprised if U2 eventually mounts a tour that grosses $1 billion. So long as U2 can still play “Where the Streets Have No Name,” no band is bigger. Songs of Innocence is a footnote by comparison.

How Adam Wingard and Simon Barrett Distilled 'Re-Animator,' 'The Stepfather,' John Woo, and More Into 'The Guest'