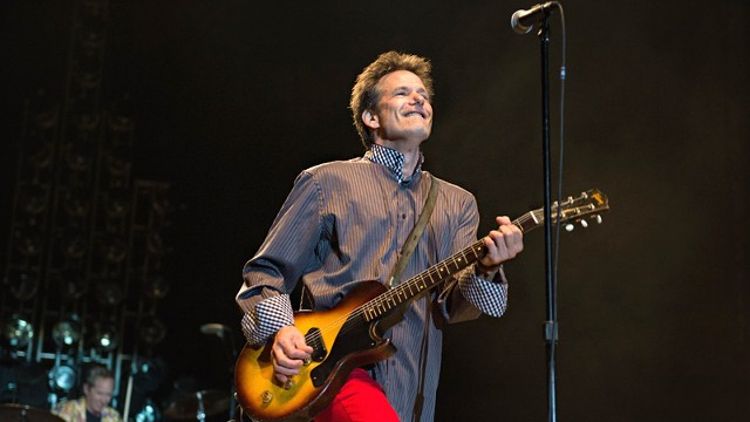 Last night, Paul Westerberg and Tommy Stinson played the second of three planned reunion concerts as the Replacements at Riot Fest in Chicago. The group will travel with the festival to Denver next weekend, after which Westerberg and Stinson may or may not launch a tour. (I would bet not, but you never know.) A lot was written about the first reunion gig in Toronto three weeks ago — the most circulated review was an exhaustive, 9,000-word account by Patrick Stickles of Titus Andronicus that was published by Spin. It’s not surprising that the Replacements would inspire that absurd amount of ink metric tonnage — when it comes to pontificating about the ’Mats, music scribes tend to sound like old baseball writers mooning over Willie Mays.

I love rock and roll and I was born in the Midwest somewhere between 1970 and 1980, so I’m especially susceptible to logorrhea about how Westerberg essentially invented the archetype that I attempted to emulate throughout my pre-marriage twenties: the hard-luck, hard-drinking, and hard-headed small-town wiseacre who weeps in his beer to “Here Comes a Regular.” All that stands between innocent bystanders and my lecture on how Tim is like Annie Hall for Middle-American males who waste away their youth in dirtbag taverns is a whiskey shot chased with a slug of scuzzy domestic beer.

So this is what we’re going to do: I’m going to write a brief (I promise it will be brief!) and professional postmortem about last night’s show. This will be for people who feel compelled to be informed on the latest ’80s rock news and demand dispassionate discourse on the subject. And then I’m going to give a slightly less brief (but still relatively brief!) reaction for my mushy-ass ’Mats bros. Cool? Cool.

The most obvious subtext of the Replacements’ Chicago concert was that the city hosted the band’s heretofore final show on July 4, 1991. In some ways that gig wasn’t all that different from this gig — both took place in a bucolic setting (Grant Park in ’91, Humboldt Park in ’13) and featured Westerberg and Tommy Stinson playing out the string with hired guns. (The ’91 lineup included guitarist Slim Dunlap, whose recent medical problems in the wake of a 2012 stroke helped to bring Westerberg and Stinson back together for a benefit EP, which set the stage for these reunion concerts.) The ’91 show ended notoriously with each band member exiting the stage and replaced by his respective roadie during an even more chaotic than usual rendition of “Hootenanny.” It was not an especially honorable finale (though the widely circulated bootleg of the show is fantastic). Thankfully, the current incarnation of the Replacements appears to be healthier and happier — not to mention tighter and better rehearsed. Now augmented by drummer Josh Freese and guitarist David Minehan, Westerberg and Stinson have already whipped up the band into fine fighting shape.

Tearing through 25 songs in 75 minutes, the Replacements essentially played a greatest-hits set, drawing from every part of their 10-year recording career. (Only 1982’s Stink EP wasn’t represented.) The first half dwelled on the furious punk rock of the band’s early years, highlighted by spirited renditions of “Hangin’ Downtown” (from 1981’s Sorry Ma, Forgot to Take Out the Trash) and “Tommy Gets His Tonsils Out” (from the band’s best-regarded release, 1984’s Let It Be). The second half lingered on the Replacements’ popular “mid” period, when poppier numbers like “Alex Chilton” and “Can’t Hardly Wait” made them one of the defining bands of the college rock era.

Unlike many acts that reassemble for a nostalgic victory lap, the Replacements exhibited no shame about being a live-action jukebox. “Do you want to hear ‘Kiss Me on the Bus’ or ‘Waitress in the Sky’?” Westerberg asked at one point. When the audience shouted out for both songs with equal vigor, the band gamely played them in succession. Sounding tight yet relaxed, and occasionally dropping lyrics and stopping in the middle of songs to crack jokes at each other, the Replacements handsomely rewarded devotees who waited patiently on the rain-soaked grounds for the band to appear for its headlining slot. When it was time to perform the tired “fake encore” ritual — where the band walks off the stage for a minute so that it can “spontaneously” perform a few more songs — the Replacements awkwardly sauntered off after a blazing “Bastards of Young” before Westerberg materialized again approximately 39 seconds later with a drum stand in hand. In spite of his exhortations to the contrary earlier in the night, Westerberg has never been all that good at being a “music-biz professional” — and was all the more charming for it.

Whether the Replacements decide to hold it together for future shows beyond next weekend remains an open question, but the fun of Sunday’s concert is that it seemed mostly like a lark. A very well-compensated lark, perhaps, but a lark just the same, without the pressures and drudgery that a proper tour would inevitably introduce into the proceedings. A short run of dates — one in Canada and two in the middle of the U.S. far from the media glare in New York and L.A. — seems like an appropriate return for such a spotlight-averse band.

(Non-fans can stop reading here, because I’m about to get a little gross.)

You know how when you go to a concert and you get this feeling that it’s just not going to be a good night? Maybe it starts with getting a really bad parking spot. Then you get in the venue and you can’t find a decent vantage point on the floor. You arrive in time for the opening act and you can tell immediately that the sound will be substandard. You order a beer to get in a better frame of mind and even that doesn’t feel right.

Well, last night was the opposite of that. My buddy and I found a perfect parking spot just a few blocks from the park. We were able to move up to within 20 or so yards from the stage and were positioned dead center — I was close enough to see everything and far enough to have a little breathing room. Also, the sound was perfect. Maybe the best I’ve ever experienced at an outdoor festival. It was like listening to a soundboard recording on headphones.

Can we talk for a second about the set list? The set list was unbelievable. Of course you could be a dick and nitpick — it would’ve been awesome to hear “Shiftless When Idle” and “Answering Machine” and “Never Mind” and “Fuck School.” But if you were to make a list of the Replacements songs that you’d need to hear live because you probably won’t ever hear them live again, it would basically look like this.

“Androgynous” and “Swingin’ Party” are maybe my two favorite Replacements songs, and they were both kind of a mess. But it was an ideal mess — Paul stopped the guitarist during “Swingin’ Party” because he had this weird Cure-sounding effect on his ax, and I swear I had the same exact thought a millisecond before he did that. Paul fixed it and the rest of the song sounded great. My god! They played “Left of the Dial” into “Alex Chilton” into “Swingin’ Party” into (!) “Kiss Me on the Bus” into (!!) “Waitress in the Sky” into (!!!) “Can’t Hardly Wait” and then into motherfucking “Bastards of Young.” Fuck, man. Seriously.

When I send you my video, can you e-mail me back a beer?

Let’s get back to the set list. Oh man, the encore was killer. Neither song was a hit, and both of them worked perfectly. (Yes, this is the third time I’ve described the concert as “perfect.” It won’t be the last.) They played “Hold My Life,” which is the first song off Tim (duh), which is my favorite ’Mats record. Then they played “I.O.U.,” which is the first song off Pleased to Meet Me, which was my first Replacements album and therefore that makes “I.O.U.” the first Replacements song I ever heard. They played my first Replacements song ever last. How do the Replacements do that? I’m talking about achieving this perfect poetic expression of the deepest part of your personal life experience while seeming to not give a shit and looking super cool in the process. It’s like the Replacements understand you, you know?

After the band was done, it started to rain. I shit you not. IT STARTED TO RAIN. It was magical.

Look, I know it wasn’t really the Replacements. Bob is dead, and Chris is alive but inconveniently painting instead of drumming. But these songs deserved to be played live at least a few more times. Because it’s the songs that ultimately matter. This music is that friend from high school who you never lose your connection with.

That said, I hope they don’t tour. Hearing these songs in the context of some lame, stupidly trendy festival amid all the hot young things in indie rock would just be wrong. The Replacements will forever be the house band for the kids who never get invited to those parties — and the adults those kids become.

Filed Under: Music, The Replacements, We Went there