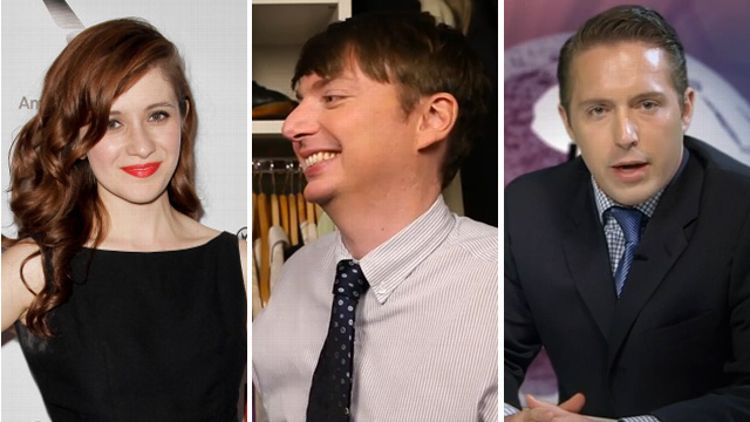 Thanks to 2013’s epic cast exodus — Fred Armisen, Bill Hader and Jason Sudeikis are out; Seth Meyers leaves in February to take over Late Night — this was already one of SNL’s most carefully scrutinized, action-packed offseasons ever. And it just got another interesting wrinkle: as the New York Times reports, Lorne Michaels has selected Meyers’s heir on the “Weekend Update” desk. Well, sort of.

Michaels has picked Cecily Strong to, for now, cohost “Weekend Update.” It’s a startlingly fast rise for the second-year cast member, but not that surprising of a move: the Girl You Wished You Hadn’t Started a Conversation With at a Party bits were instant classics, and her ease on the desk was evident. Says Lorne: “Cecily, from the first show, was right there. She exploded.”

The plan is for Cecily and Seth to share the desk until February, at which point — well, at which point they might just keep sharing the desk. Because Late Night doesn’t do a Friday show, Meyers could conceivably roll through Studio 8H that night and prep for “Weekend Update.” That seems like a tall order, especially for a man attempting to launch a new talk show, that most fraught of entertainment endeavors. But you can understand the motivation: Meyers is too good at “Update” to just let him go. Then again: It sounds like, if things work out, Strong might get the desk all to herself by the end of this season. Crazy.

In less celebratory news: Tim Robinson, who was a featured player last season, is getting bumped down to writer. This must be something of an awkward situation, but it can’t be all that bad: I mean, Lorne could have certainly fired Robinson instead of demoted him, and so this might just be something that, behind closed doors, makes sense for all parties involved. Note that, on Bill Hader’s most recent stop on the B.S. Report, he specifically lauded Robinson’s writing chops: “He’s hilarious on Wednesdays [during table reads] … Will Forte always had my sweet spot on Wednesdays. Tim was that. He has that energy. And like Forte, he’s a great writer. Great, original ideas … He’s a guy that when his stuff came up at the table this past season I would get real excited. And he always delivered.” High praise from the god Bill Hader.

Finally, as we meet the new cast, some sage words from the ever-wise Mr. Michaels: “People attach to the cast they see in high school. In those years they generally can’t drive. They don’t have any money. Staying up late is exciting. Being with friends up late is really exciting. So they’re very connected to the cast they see then.” And: “I think there’s something about what it’s trying to be. It will never get there. Never get to be as good as I am hoping it will be or people imagine it used to be. But every week, even in the worst weeks, there’s always something I’m proud of.”

OK, now on to some introductions:

O’Brien is pulling a reverse Robinson this year, and going from writer to performer. If he already looks familiar, it’s probably from his YouTube series, 7 Minutes in Heaven, in which he interviews celebs in a closet, and then tries to kiss them. It’s very funny. (“Do you want Seven Minutes in Heaven to come to your closet? Just log on to internet.com … thanks, and keep Googling!”)

O’Brien probably won’t get to bring the exact 7 Minutes concept to SNL, but you could certainly see him riffing off the “painfully awkward talk show” format. For more, here’s a good, brief profile on the shambling young man.

Wells can sing, she can act, she can do a Zooey Deschanel impersonation … which is good, since Abby Elliott left the show in 2012. She’s a vet of UCB L.A.

You know Bennett from the AT&T ads with the kids (and, sometimes, with the people being mean to Larry Bird). You might not know that Bennett had been hilariously interacting with children way before AT&T came calling.

He’s also part of the Good Neighbor sketch team, and his buddy from the crew, Kyle Mooney, is one of the new performers as well. This is the first I’ve ever heard of Mr. Mooney, but after sampling his work on YouTube, I’m calling it now: Here is your breakout newbie.

Good Neighbor director Dave McCary was hired, too, making this almost another Lonely Island situation: One member of the team, Nick Rutherford, isn’t coming along for the ride. But don’t worry about Nick Rutherford: Good Neighbor had already landed a show with Comedy Central, about “a disintegrating local late-night talk show” … although, now that SNL has come calling, Deadline says “there is an effort to work things out.” Wait, should we be worried about Nick Rutherford?

Wheelen, a stand-up and sketch comedian, is the latest addition to the cast, having first been announced as a writer before getting that sweet performer bump-up. He likes to make fun of In-N-Out and does a pretty good Hitler.

I know it’ll be a while before I actually see him on the air, but Milhiser once made a Step Up parody that revolved around competitive patty-caking, so he’s already forever in my heart.