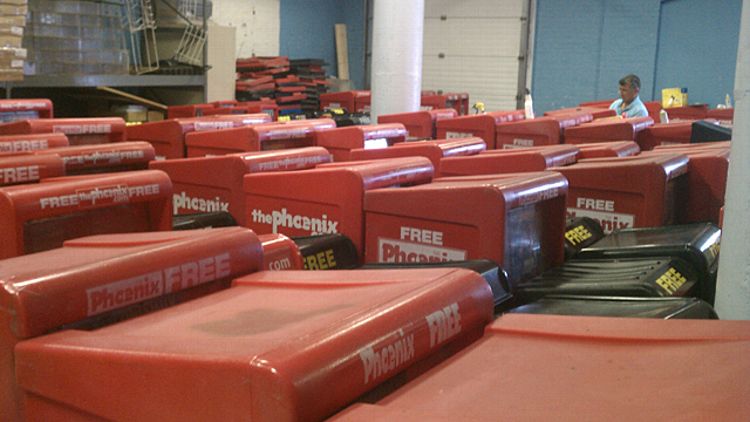 Two days before Thanksgiving in 1978, I got fired from the only reporting job I’d ever had. For two years, I had been virtually the entire editorial staff of Worcester Magazine, where, for 50 bucks a week, I’d written practically everything. In October of 1978, I’d reported and written a story about the 25th anniversary of the founding of the John Birch Society. The newly hired editor of the magazine — who was not me — was rather a dunce and killed the piece. He did not agree with my assessment of his talents, so I got fired. I had fallen off the bottom rung of the ladder. At the instigation of a friend, I submitted the piece to a guy named Bob Sales, who was the editor of the Boston Phoenix, because, really, having been fired by Worcester Magazine, what in the hell did I have to lose?

Sales bought the piece and, as luck would have it, I had a chance to go in with some friends on an apartment in an old brownstone that was hard by the pond in Jamaica Plain. For the first time, I wandered into the old warehouse on the corner of Massachusetts Avenue and Newbury Street, right there across from the old Kentucky Tavern, where they had filmed some of The Friends of Eddie Coyle, the film version of what is still the greatest novel ever written about Boston. I didn’t know anyone. The environmental reporter had a husky that was somewhere between 3 and 300 years old, and it would snooze in the middle of the floor until George Kimball, the sports editor, got off the elevator. Then it would growl. Otherwise, it was a rug. Nobody ever figured out why that was. I looked warily at the hound and went into Sales’s office. He read the Birch Society piece, tossed it into his Out basket, and said, “OK, what’s next?”

For the next five years, I worked at the Boston Phoenix. Because, for most of my tenure, I was writing for my rent, I wrote everything they asked me to write. I wrote 6,000 words about lobsters and 5,000 words about raccoons. I covered the 1980 presidential campaign, and a weird trial where a bagman testified that he had been extorted by a state senator who’d been paying him off for over a decade, and the endless legal battle over the only porn house in Chelsea, which caused me to watch an X-rated movie with a 70-year-old judge and a bunch of jurors who may not have recovered for decades. I honed my chops. I became a generalist. I learned everything I know about being a journalist, and almost everything I know about being me in the world.

On Thursday afternoon, the word came down that the Phoenix was going to close. I felt gutted. I heard from old colleagues around the country who felt gutted, too. The honor roll of Phoenix alumni is too long to try to cite fully; the movie critics alone are an all-star team. What’s important is that we all were part of the outlaw spirit of Boston journalism, the one that went back to colonial pamphlets and the Liberator. We talked about stories, and the battles to get them together, and about night after night at the Eliot Lounge across Massachusetts Avenue, where the paper often got edited, and where bartender Tommy Leonard would slip you the occasional free beer either because he forgot to collect for it or because he was aware that the most alternative thing about the alternative press was its concept of a salary. My first week at the paper, I went into the Eliot and Kimball was there, with his head on the bar. I introduced myself. He opened the one eye that he still had and said:

The Eliot was the second newsroom. Not only did I get edited there, I once brought over a portable typewriter — ask your folks, kids — and turned around a 3,000-word political piece at the bar. Happy hour snacks turned into dinner. We might have been the “alternative” press, but there was an awful lot of The Front Page to us because, seriously, we were where the soul of newspapering came to reside.

I mean, Jesus Mary, where do you start with the newspaper at which you grew so much, and learned so much, and came to respect the craft of journalism with a fervor that edged pretty damn close to the religious? What memories have pride of place now? The fact that T.A. Frail, now at Smithsonian, suggested you might just like Dos Passos’s U.S.A. trilogy and it wound up changing your life? The day that Doug Simmons, now at Bloomberg News, snuck up behind you and stuck a pair of earphones on your head, cranked Black Flag’s “Six Pack” up to 11, and taught you that rock and roll had not calcified when you graduated from college? What’s the song that plays when you realize that you’re young when you thought you were growing old? What’s the prayer of thanksgiving for a hundred days of fellowship, drunk on words, all of us, as though there were nothing more beyond the next word, the next sentence, the next paragraph locked into place? Please say that the muse is something beyond the balance sheet, something beyond technology. Tell me that she’s alive the way she once was when you’d feel her on your shoulder as one word slammed into the other, and the story got itself told, and you came to the end and realized, with wonderment and awe, that the story existed out beyond you, and that it had chosen you, and you were its vehicle, and the grinning muse had the last laugh after all.

God, it was a carnival. I saw the publisher twice get into punch-ups, once with a staffer and the next time with a janitor. And, in both cases, it was at a Christmas party. We never got paid much, but we did get paid, and we were able to write about what we wanted to write the way we wanted to write it. We were a legitimate institution of Boston eccentricity, and we were proud of the fact that we were recognized for being that very thing. In 1982, when the 76ers beat the Celtics, and the Garden erupted into a chant of “Beat L.A.!,” the great Bob Ryan interviewed Darryl Dawkins and found Michael Gee, then covering the game for us. You have to have this quote, Ryan told him, because we can’t use it. Ryan had asked Dawkins what he felt like when he heard that chant from a Boston crowd.

“Man,” Dawkins said, “when I heard that, my dick got stiff.”

If I recall correctly, that was Gee’s lead.

I thought about absent friends — about Mark Moses and Cleo Leontis, about Dave O’Brian, who’d pretty much invented press criticism, and about Kimball, who’d reinvented sportswriting, and about Alan Lupo, who sat at the desk facing mine and taught me everything about the city that I’d ever need to know, and about John Ferguson, that sweet, gentle man who refined the music in my copy, and about Clif Garboden, who believed so fervently in the idea of an alternative press, and for whom I’d written about lobsters and raccoons, so I could make my rent and have a career. If you like this, thank them all, too.

Aw, damn it all to hell, why isn’t the Eliot open for one more day?

Grantland Reality Fantasy League: The Back Rub Felt ’Round the World