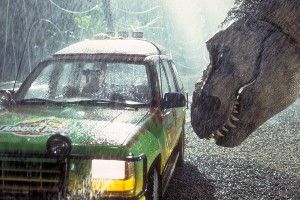 With its 20th anniversary fast approaching, the motivation is on to get another Jurassic Park movie made. Talk surrounding Jurassic Park 4 has been around pretty much since the third movie came and went in 2001. In recent weeks, the rumor mill has begun to suggest that Steven Spielberg himself would step in and return the series to its former glory. But Spielberg has his usual billion projects to worry about, so the project is going forward with a decidedly atypical choice.

Colin Trevorrow, director of last year’s festival darling Safety Not Guaranteed, was officially announced as the JP4 director on Thursday, getting everybody scrambling to their computers to talk about “hipster” directors taking on big-budget studio projects. It’s not SO crazy, actually. Safety is a small film, but with its “Is this really about time travel?” plot, it’s ambitious of intent and shows a willingness to go there by the end that will likely serve a project like JP4 well.

Also, between Joss Whedon on The Avengers and Marc Webb on The Amazing Spider-Man, there’s something of a mini-trend of studios trusting major properties to directors whose experience has been in much smaller-scale projects. Basically, what I’m saying is that it’s not too late to get Harmony Korine to direct the Justice League movie.