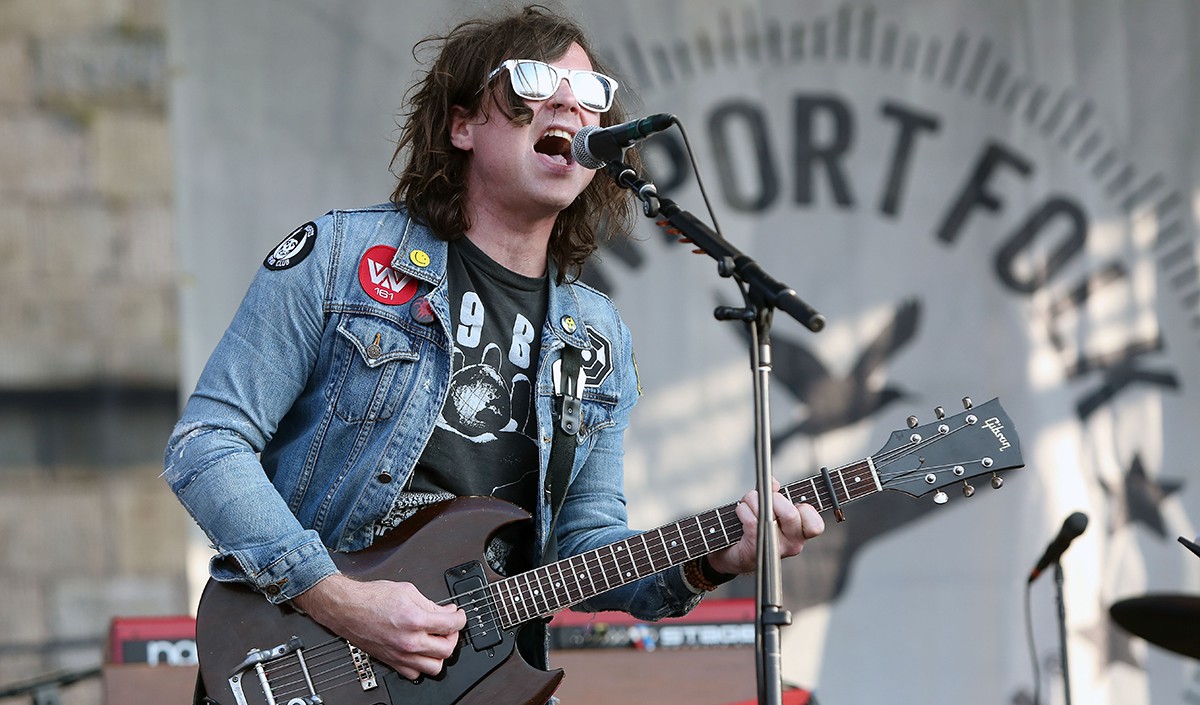 Near the midpoint of his new self-titled album, Ryan Adams poses an unlikely question: “Am I safe?” In the past, safety has rarely seemed like a concern for Adams. Rather, he has worked impulsively, recording many of his 13 previous studio LPs on the fly. He’s been known to jumble sublime songs with silly toss-offs, and casually make wild stylistic shifts that have occasionally put his career in serious jeopardy. If the forthcoming Ryan Adams, due out next week, isn’t a relatively methodical effort, it at least sounds methodical. The album’s 11 tracks mine a narrow tract of moody guitar rock and guarded optimism; the latter is a carryover from Adams’s last album, 2011’s similarly careful Ashes and Fire, which signaled the beginning of Adams’s current “safe” phase. It presents Adams at his most settled and best behaved, mostly for the better.

I sometimes miss the unsafe Adams from a decade ago, when his recklessness — whether it produced brilliance or boorishness — was never dull. Now, Adams tends to quarantine his zanier instincts on niche releases like 2010’s sci-fi heavy-metal curio Orion and the recent 1984, an old-school punk corker that buries pop hooks in a maelstrom of laser-zap guitars with the deftness of Zen Arcade–era Bob Mould. Adams’s proper albums, meanwhile, have grown straighter. Ryan Adams neither scales the heights nor plumbs the lows of his oeuvre; instead, like Ashes, it finds a nice groove and burrows in. Adams has been married for five years to Mandy Moore and turns 40 in November; he’s a man for whom security matters, and that steadiness has translated musically. Adams once was destined for early burnout; on Ryan Adams, he is poised to go the distance.

As much as I’ve enjoyed playing Ryan Adams constantly around the house for the past month, I can’t help but think of another album that Adams didn’t put out in its place. In an interview last month with NME, Adams admitted that he spent “$100,000 or more” on an LP recorded with Ashes producer Glyn Johns that he wound up shelving, because it was “slow, adult shit.” Adams has referenced the scuttled Johns LP in other interviews, without going into much detail. Presumably, it was similar to Ashes and Fire, as “slow, adult shit” could also serve as an uncharitable description of that record. It also appears that Adams wrote a new batch of songs for Ryan Adams, which means that this so-called “Ashes Part 2” is yet another “lost album” adding to an already generous shadow discography of unreleased work.

Artists like Bob Dylan, Neil Young, and Prince are notorious for hoarding scores of songs and even complete albums in their personal archives. For devotees of Adams, collecting bootlegs has been just as important as following his proper releases. This has been true as far back as the late ’90s, when Adams fronted the pioneering alt-country act Whiskeytown. That group’s final album, Pneumonia (2001), was first heard in slightly different form as a download that circulated widely before it came out officially. Pneumonia was predated by Forever Valentine, a quickie record made unbeknownst to the band’s label over Christmas break in 1997. The fidelity isn’t great, but Forever Valentine ranks with Adams’s best Whiskeytown work, cutting his sad-sack balladry with kinetic rockers like “Rays of Burning Light.”

Some of Adams’s lost albums basically amount to a collection of demos — this is true of Whiskeytown’s Fucker, a hard-charging mash note to the Replacements featuring Tommy Stinson made after the band’s most celebrated album, Strangers’ Almanac (1997); and Adams’s Pinkhearts Sessions, a goofy rock set recorded in the aftermath of 2001’s mainstream breakthrough Gold and highlighted by shiny ear candy like “Mega-Superior Gold.” But the majority of Adams’s lost records work as thematic statements as complete and coherent as any of the albums officially released via traditional methods. Destroyer and The Suicide Handbook, which date back to periods before and after the release of his acclaimed 2000 solo debut, Heartbreaker, showcase Adams in stripped-down, guitar-and-voice mode and collectively represent the most stunningly beautiful music of his career. (“Hey There, Mrs. Lovely” from Destroyer ranks among his very finest songs.) 48 Hours, recorded in two days immediately after he finished Gold, is the easy-to-love country-rock record that some of Adams’s followers wish he would continue churning out. Darkbreaker, composed of songs submitted to Cameron Crowe for his 2005 film Elizabethtown, is Adams at his most ravaged, a druggy and draggy batch of gut-wrenchers that are reminiscent of Big Star’s Third/Sister Lovers era.

Some of these songs were later released in different form, or included on the 2002 compilation Demolition. Adams talked for years about assembling a box set composed of The Suicide Handbook, 48 Hours, Pinkhearts, Darkbreaker, and yet another unreleased album that hasn’t been bootlegged, a self-described “epic” rock record called Blackhole. But the box set, if it’s still in the works, appears to be no closer to release. Likewise, in 2010, Adams announced that he would finally put out Blackhole, which dates back to the mid-’00s, along with still another lost album he made in 2007 with his band the Cardinals, III/IV, a hit-or-miss four-sided concept record about “the ’80s, ninjas, cigarettes, sex and pizza.”

I could go on. There are songs Adams has only played live, there are songs he recorded under the moniker of Sad Dracula, there are the Dadaist rap songs he posted on his blog in 2006, there’s that bonkers cover of the Strokes’ Is This It he recorded on mandolin that may not actually exist. Clearly, if Adams does ever get around to compiling that box set, it will be massive and massively essential to understanding the arc of his career.For every zag Adams took in the early ’00s with albums like Rock n Roll and Love Is Hell, he was zigging with albums like 48 Hours; ultimately, he deliberately set aside songs that conformed with his image as a denim-clad folkie in order to explore riskier avenues. Hearing the unreleased albums offers a wider view of the roads taken and not taken, and testifies to the full breadth of an incredible output over the past 15 years.

In terms of how he is perceived, Adams’s shadow discography can be a double-edged sword. On the one hand, it confirms his status as the most talented singer-songwriter of his generation. When it comes to putting melody and words together into appealing, melodic, and heart-rending packages, nobody does it with more apparent ease. Give Adams a guitar and five minutes and he’ll find a new way to break your heart. On the other hand, “apparent ease” can also be construed as a negative trait, just as “talented” can be twisted into a backhanded compliment for a person who perhaps hasn’t reached his full potential. Because Adams has made so much music, and so much of it is worth hearing, it’s possible to view it more as an exercise in prolificacy than artistry, a mere parlor trick of insta-composition as opposed to an important expression. I don’t share that view — Adams’s lack of a filter doesn’t diminish his art, it’s what makes that art possible — but it is undoubtedly baked into his image. From the beginning of Adams’s career, he’s been haunted by taunts of “not good enough!” from demanding listeners who believe that if he would just settle down and focus, he might finally make the unassailable masterpiece that’s expected of him, like the smart kid who needs to buckle down and study for his SATs already.

If anything, Ryan Adams disproves this thesis. This is Adams in buckle-down-and-study mode, and the methodology didn’t produce a masterpiece; it resulted in another Ryan Adams album, though that ought to be enough. In my 2011 interview, Adams complained about how his latest work is constantly dismissed in comparison to his old work, even when that old work was itself dismissed in its time: “I made Love Is Hell, and people panned it really unnecessarily; there was harshness around it. Then, only a little bit of time passed, and people would fucking bring that record up as something I wasn’t doing, which is why my current records were shit,” he said. “It’s a negative trend; it’s a trend of saying, ‘Of course the thing he’s tapping out can’t be as good as the last thing.’ What’s really happening is this: I’m making records, and people are fucking trying to have an instant emotional connection with something that’s bigger than them, bigger than their immediate response.” With any luck, Adams’s wondrous universe of songs, both released and unreleased, will grow only bigger.