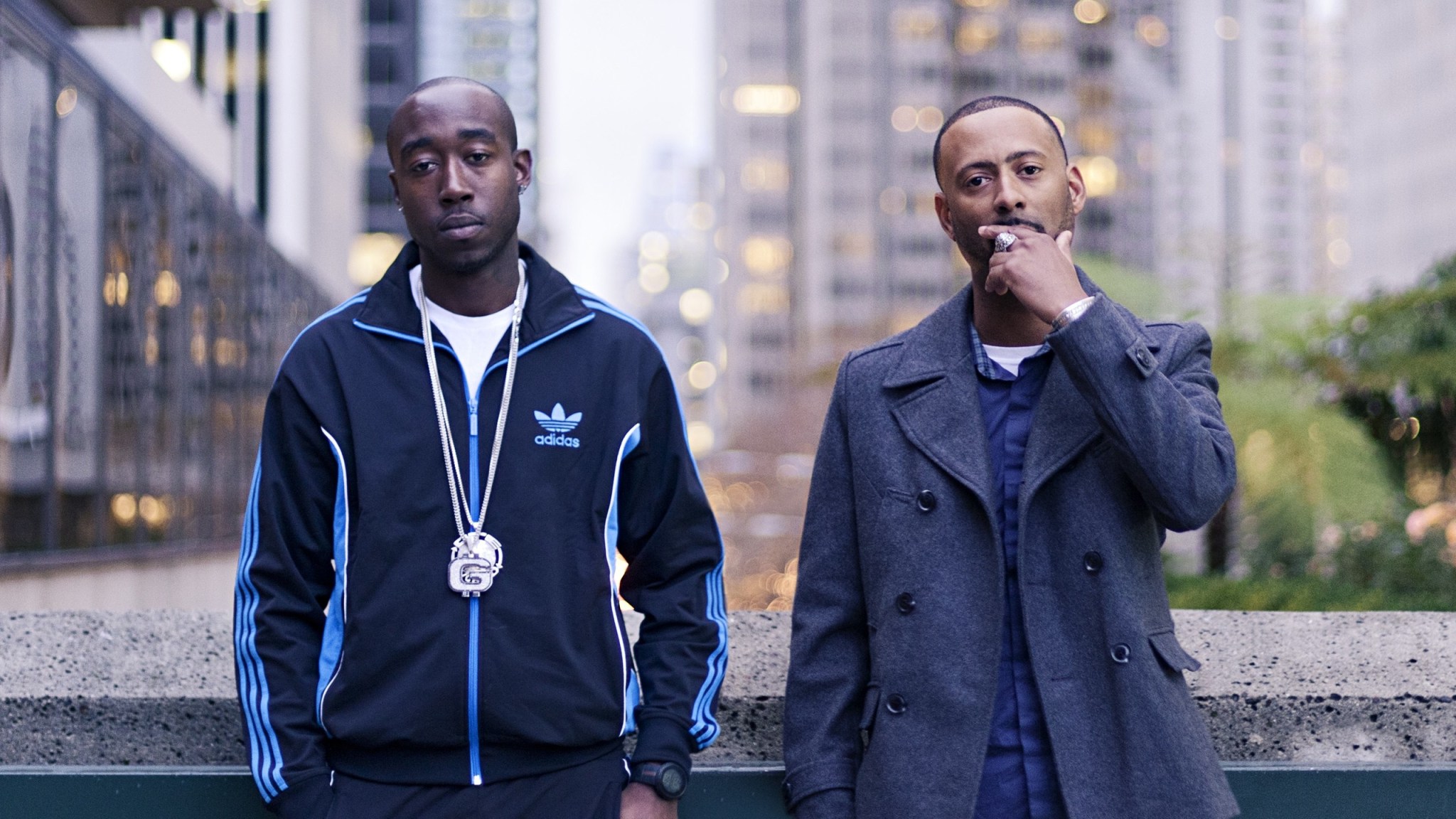 This week sees the release of Piñata, the first full-length collaboration from the producer Madlib and the rapper Freddie Gibbs. Gibbs is your classic hard-knock street MC and Madlib is an experimental DIY hip-hop hero, so you could call it an odd pairing. But the truth is, Madlib is restlessly innovative, omnivorously music-nerdy — he’s as likely to nick bits of ’70s French sci-fi scores as he is a vintage Marley Marl loop — and preposterously prolific. As Yesterday’s New Quintet, he makes the kind of hearty, homey jazz he was raised on; as Quasimoto — a cigar-smokin’, brick-totin’, baby-rhino-resembling villain alter ego — he makes the kind of trippy rap music your grandkids will be raised on.

All of which is to say this: At this point, there’s not really a nook or cranny of the foreseeable music universe that we shouldn’t expect him to wanna swim around in. And so when it comes to the Gibbs pairing, it’s simple enough. As Madlib puts it, “Most cats can’t fit on my beats. He can take a crazy-ass beat and kill it.”

In two separate phone conversations last week, Grantland spoke with Madlib about his process and his listening habits, and with Gibbs about how “you can’t name five mothafuckas that rap better than” him “on the planet.”

Your father was an R&B session musician. He was the one who exposed you to music at a young age?

Exactly. He had a crazy collection of all types of music. He brainwashed me. In a good way.

Did that mean you always thought of music as a possible career path?

Um. Nah. I didn’t really look at it like that. As a kid, I was trying to copy what I heard. Namely, I was just listening to producers I looked up to, like 45 King and Marley Marl, and trying to do what they were doing. I ain’t think it’d be a career until I recorded [his first rap group] Lootpack. I didn’t think I’d make money from the type of music I like.

What was the first kind of music you got into?

Click here for all of our interviews with fascinating people from the worlds of sports and pop culture.
I was strictly jazz and soul — I didn’t see beyond that. Then when I heard hip-hop, I didn’t listen to jazz or soul till I started trying to produce. Now I like everything. Well, probably ’cause I’m older. In your forties it’s kind of different. I wish I liked it all back then. My collection would have been crazier.

I’ve read that you spend hours or days or weeks just listening to music. How’s that work? Are you taking notes or anything while you’re doing it?

I just try to absorb as many things as I can, then figure something out from there. It’s the knowledge. I try to get creative. I listen to a lot of different things. I’ll be listening to prog rock, then the next couple of hours — Indian. Prog rock, that’s my favorite shit ever. I’m also into a lot of industrial shit right now. Whatever. Anything. Different rhythms. I try to challenge my ears. I get bored easily.

Is there any genre you’ve never been able to get into?

Country. I’m serious. I haven’t really delved into it. I know there’s some good shit in every genre. But I haven’t searched it out.

Well, shit, I have three kids, so that’s enough right there. My shit is strictly music and my kids. I may take two days off, or a day off, or I may just listen to records for a couple months. Or I may take a week and not sleep [and make music]. It’s always different.

Did you ever have a musician’s version of writer’s block?

Oh yeah. Every real artist is gonna get that. May be a week, may be a year. But I have so much material, nobody would know. If I wanted to stop making stuff, I could just put out stuff that I have on my walls.

Can you take me back to the day you created your alter ego, Quasimoto?

Oh, I really don’t remember. I was doing a lot of shrooms and stuff back then. I was just trying to make music without thinking about it. And talk how I wanted to talk. Just free. Just trying to be free.

He’s the more expressive, wilder side of you?

Right. All my friends look at me as a quiet mute or some shit. It was a joke first. I was trying to fool people. My friends didn’t know it was me for a long time.

I know you’ve tried to do a Quasimoto live show. Any chance you’d try that again?

Yeah. It didn’t work out. I mean, if I could stand beside him … that’s the only way it’s gonna work. Hopefully a new Quasimoto album coming though.

I got songs done but when it’s there, it’s there. It’s no rush. It’s just like Madvillain — it just has to be right. I’m also thinking about putting out the album before [the first Quasimoto album] The Unseen. That was the first album I recorded [but didn’t release]. Just gonna have to be brave and not care about it and put that shit out there.

Speaking of the Madvillain sequel, any word on more work with Doom?

He wants to do it. It’s just like me with Quasimoto — it just has to be right. It ain’t like it’s gonna be worse or better. It’s a continuation. We got like 10, 12 songs. It’s up to him. We talk. He saying he recorded new material. We gon’ see, we gon’ see very soon. I’m gonna go to Europe, we gonna hook up with him. Next month, London, first thing I do is go see Doom.

At one point there was talk of you working with Kanye?

I don’t know what happened. Maybe he didn’t wanna pay my fee, or maybe he didn’t wanna go in that direction. Probably the money thing, he wanted to put his name on my— I actually don’t wanna talk about that. A lot of people record over my music and it don’t come out.

You don’t seem too concerned about it.

And so it just happened with Gibbs?

Oh yeah. He’s a cool dude and he trying to challenge himself. He’s doing more of commercial sounds but he knows how to fit on my beats. Most cats can’t fit on my beat. He can take a crazy-ass beat and kill it. From the first song, I knew it was gonna work out.

You’ve explained that the title for the album came to you in a dream. (“They was just kids playing in the dope. They was just playin’ in the dope. It was little four-year-old kids hitting dope in piñatas.”) Does that happen to you a lot, inspiration from dreams?

Yeah, definitely man. I have a lot of bad dreams — you know, through the real experiences on the streets. My dreams are real vivid. I was telling my homeboy today: “When I see a vision, I try to put it in my artwork instead of putting into something negative.” That’s how I kind of got to where I’m at.

I think I always had visions for what I wanted to do. It just wasn’t rap — I never thought I’d be a rapper. I had visions of being somebody prominent. The rap gave me the vessel, or the vehicle, per se, to do that.

You were signed to Young Jeezy’s label, but then you had a bit of a falling out. What happened?

The odds being against me worked in my favor. Nobody wanted to give me a record deal or any type of shot. Even Jeezy, he didn’t wanna give me the opportunity that he promised me. It was like, damn, the industry totally was against me. But I know what I had in my brand and I know my fan base, and just ’cause the record labels or Young Jeezy or some mothafuckin’ rapper tell me I can’t do it, I’m not gonna not do it.

So you think Jeezy didn’t really know what he was doing when it came to running a label?

But a lot of people don’t know how to run a label — that’s something you gotta learn. I’m gonna take the necessary steps. That’s why I got the right people around me. I don’t just got people around me sucking my dick. That’s his problem, too many fucking yes-men, not telling you the real. I made mine in this game —

[Phone rings in the background.]

How’s this project work into that?

This whole Madlib shit is different. People wanna talk to me because I stepped outside the box. If I was doing the same thing all the guys in my generation was doing, then how’d I’d be standing out? I’m from Gary, Indiana, motherfuckas not trying to pay attention to me anyway. They wanna write me off. A lot of motherfuckas would have let it break them. But I never let it stop me at all. This Madlib project was special, with very challenging beats to rap on, and I wanted to bring my A-game and do it to the best of my ability.

This is random, but I saw you tweeting about the Oscars. Did you enjoy them this year?

I couldn’t listen to all that Bette Midler elevator music. Maybe when I get a little richer — need to get some more rich white friends, then I’mma get into that shit.