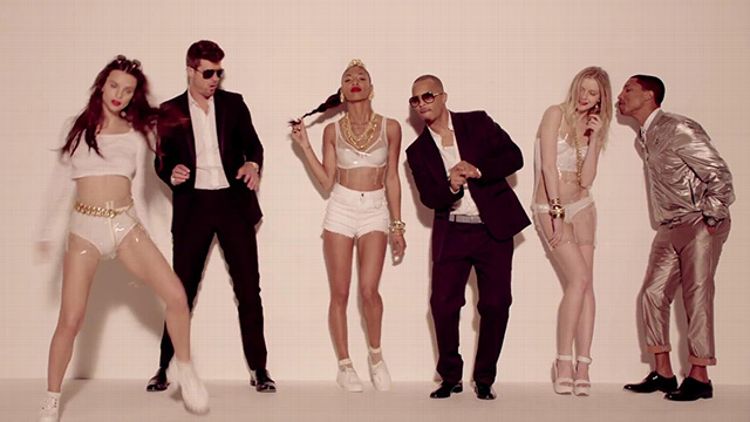 Heads up: NSFW videos and websites are occasionally linked to throughout this post, so watch who’s watching your monitor.

Robin Thicke’s “Blurred Lines” and Miley Cyrus’s “We Can’t Stop” have quickly become two of 2013’s most watched and argued over music videos. Thicke’s finds him and the song’s costars Pharrell Williams and T.I. goofing off in suits as they are out-charismaed by a trio of female models in just underwear, shoes, and a series of unflattering props. Cyrus’s “We Can’t Stop” evokes the tail end of a house party where anything goes, where the former Disney star wrestles in the remnants of a broken piñata filled with blunts, smacks butts in the kitchen, and dry-humps a bed in the guest room.

Both of the clips were directed by music video veteran Diane Martel, who got her start in the early 1990s specializing in work for grimy New York rap acts like Method Man and Onyx. At the same time, she began a long collaborative relationship with Mariah Carey, handling eight of her videos that decade. Now Martel has more than 100 entries in her videography and has directed plenty of stars and the up-and-comers in pop, hip-hop, soul, and rock.

Though Martel’s output has been consistent and occasionally brilliant, until lately nothing has been able to get peoples’ tongues wagging like “Blurred Lines” and “We Can’t Stop.” They come at a time when labels simultaneously consider music videos increasingly inconsequential and commission a parade of unrated clips stacked with nudity and gross-out images. While traveling in Europe, Martel answered questions via e-mail about these two videos and why artists are willing to take risks with her.

Where did the concept for the “Blurred Lines” video come from?

Robin asked me to make a white cyc video. I heard the song and loved it. Here was an opportunity to try out some of my ideas about sales and craft working in unison.

Click here for all of our interviews with fascinating people from the worlds of sports and pop culture.
I love Helmut Newton and as I sat and thought about the ideas for what the girls could wear in the video, some images of his work came to mind. I realized they could wear … shoes. This would get some attention for the song and the artist.

The hashtag was a pretty obvious idea. I like that it’s hard to see what’s going on behind the graphics and a bit awkward. It sells Robin nicely. His [last] name is strong and I suppose it has subconscious connotations.

I really pushed to find ideas that were going to be fresh in front of a white wall. I work with a young art director named Georgia Walker, and we have a joke about the creative graveyard where the ideas that are too crazy go and wait for the right project. We included a few of those, like the hose and the bad babies. I asked her to find gross props and oversized props. My favorite shot in the video is the one where the model is riding the stuffed dog with her tongue out. Georgia found that nasty dog. That dog is incredible when Robin pets it looking like Dean Martin.

I wanted to deal with the misogynist, funny lyrics in a way where the girls were going to overpower the men. Look at Emily Ratajkowski’s performance; it’s very, very funny and subtly ridiculing. That’s what is fresh to me. It also forces the men to feel playful and not at all like predators. I directed the girls to look into the camera, this is very intentional and they do it most of the time; they are in the power position. I don’t think the video is sexist. The lyrics are ridiculous, the guys are silly as fuck. That said, I respect women who are watching out for negative images in pop culture and who find the nudity offensive, but I find [the video] meta and playful.

What were some of the references you pulled from for the video?

I have written a lot of white cyc treatments, I am obsessed with and go to see George Balanchine’s black-and-white ballets at the New York City Ballet each season. They are super minimal. I love Richard Avedon. I was a dancer and a choreographer, and before I was a director I made performance art that was very simple with bodies and D.I.Y. sets. [For “Blurred Lines”] I wanted to have beautiful bodies and crazy, fucked-up sets. I thought about cheap props, crappy fun stuff. The video is goofy and innocent. I was channeling Benny Hill and 1960s variety shows.

Was the intention to always do both a regular and unrated version?

I wanted to do a nude video and turned the job down when they said we couldn’t. They came back agreeing to do the nude one if I would do a clothed version. Lisa Kati, who is a sick stylist and who has an amazing web series called “LisaTV,” made the see-through clothes. I wanted stacked shoes, so she stacked ugly nurse shoes.

One of the things I like about the video is that the women in it aren’t traditional music video–style dancers, but there is naturalness in the way they dance — that you don’t see often in videos — that is very charming.

The movement in the video is very much calculated. I wanted models that would walk on the beat in a specific way. I am a choreographer, as well as a director. The walking is the core of this video. The walk was perfect with the song. Try it at home, it’s really liberating. Robin’s and Pharrell’s walks are really great. T.I.’s hairbrush dance is absolutely memorable.

In his interview with GQ, Robin Thicke said the idea was to be “derogatory towards women,” and that comment has caused some controversy. Was that something that was discussed on set or in the planning of the video?

That’s crazy. Maybe he wasn’t thinking when he said that.

Where did the concept for Miley Cyrus’s “We Can’t Stop” video come from?

Miley and I wanted to make a trippy, fucked-up video that was like a giant selfie.

What was the tone on the set like for that one?

Miley Cyrus is an astonishing young lady — effervescent, creative, excited, and so loving. She’s my favorite artist now. She was engaged with the entire cast. I’ve never seen a pop artist this normal. She is sophisticated and hilarious. She is one of the people, she is not a freaky celebrity. She engages and is 100 percent sincere. I can’t say enough about how truly fly this kid is.

Did Miley or her camp tell you from the very beginning that they wanted to do something more sexualized or risqué than what she’s previously done?

She and I loved the idea of her being over the top. Her “modeling” is crazy, like what the fuck is she doing in this video? Her teddy bear dancing, she’s kissing her doll, she’s riding a horrible bike with her butt out. I don’t see another female pop star getting into a girl fight in her video. This video is fucked up and fun. It’s like a long Vine.

Was there anything you proposed her doing in the video that she thought was going too far, or was she up for anything?

I wouldn’t propose anything for anyone that wasn’t healthy for their image or their persona. That would be weird, no?

Why do you think she was ready to do this type of video now?

It’s a fun video. She’s vibrant, she’s sexy, she’s social. She posts fun pictures on Instagram, she is a fierce kid who loves people, she wants people around her to feel good, she loves music, she loves dancing, she loves all kinds of fashion. She’s 20!

You’ve previously done videos for other female pop stars where they are just starting to publicly express their sexuality, including Mariah Carey’s “Dreamlover” and Ciara’s “Promise.” Why do you think you’ve gotten the reputation as a director who artists feel comfortable doing this with?

I love performers and my minimalist work puts them front and center. They have to perform because there is not a lot else going on; they feel this on set and the way I shoot invites them to contribute a lot. Some songs are about sex, some moments in careers are about sex. If it’s called for, we go there. I was a dancer, I know what it takes to go there.

My uncle was Joseph Papp, the foremost American theater producer, and I grew up watching impeccable performers from the age of zero, so I only want to see a great performance. None of my videos are conceptual, even the conceptual ones. They are all about the artist doing it. I’m comfortable with sexuality, so that maybe helps performers. We are talking about music videos.

Both “Blurred Lines” and “We Can’t Stop” have generated a lot of attention, and in the case of “Blurred Lines,” has helped it become a global no. 1 pop hit. We hear about the diminishing importance of music videos nowadays, but do you think these are cases that show the continued impact that they can have on a song’s success?

The Internet is fickle, but if a video is strong and entertaining, it is going to get massive hits, so of course strong work is going to have an effect on record sales. As I said, I’m mega-focused on selling records right now, so I’m doing that. I’m only taking jobs where this is a possibility. There is a new generation of kids that are overstimulated as viewers and you have to address that somehow. They also have obsessions with things I’ve been lucky enough to have experienced in real life, so there is an easy dialogue there. I’m just paying attention to the audience and their movements.

You’ve directed music videos for 20 years now. Are the record companies now a lot more open to taking risks in what they’re willing to show their acts doing?

Back in the 1990s the video commissioners had film and art history degrees, so there was an environment for serious creative investigation. Video directors then were often brilliant: Michel Gondry, Spike Jonze, Chris Cunningham, Jonathan Glazer, Anton Corbijn … Serious pop art was being made by intellectual directors. Look at Devo and Talking Heads videos [from the 1980s], the risks then were huge, massive.

Now most label commissioners don’t know who these brilliant directors are and are overworked and trying to keep up with last-minute production and slashed budgets. This is not a fertile place to work. Maybe because I’m actually a career music video director, I can push things. People trust me a bit.

The best client I have is Pharrell Williams. He is an artist, so he let’s me do my thing. He’s into progress. Most labels don’t give a fuck about videos anymore. Maybe they will again, I don’t know. It’s grim right now.

You’ve done some good rock videos for bands like Franz Ferdinand and the Killers, but that’s not really what you’re known for. Is that a genre that you’d like to do more work in?

I’m doing the next Franz video for a great song called “Evil Eye” and I’m excited about that. I have a few good ideas for some EDM videos where there would be no artists involved. I’m definitely excited to make some crazy stuff that’s really strong and focused right now. I want to work with Riff Raff. I would love to work with Rihanna. I love Tyler, The Creator. I want to do more with Miley, we discussed doing a John Waters–style short film.