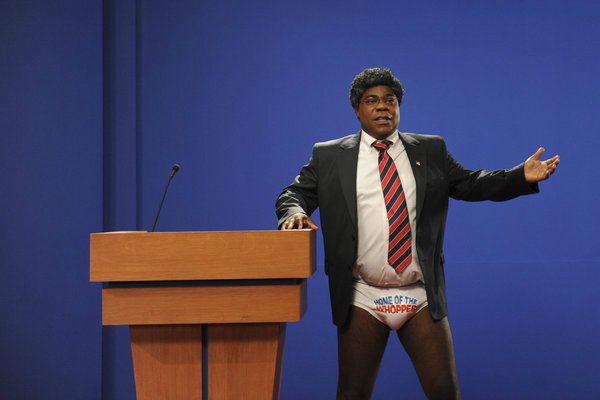 If the mere sight of a spreadsheet can open Liz Lemon’s boneyard to any and all approaching dump-truck traffic, imagine what the whiteboard in the writers’ room for last night’s episode of 30 Rock could accomplish. “Governor Dunston,” written and directed by co-showrunner Robert Carlock, flooded the zone like the American heroes of BP, packing nearly as much story into its 22 minutes as jokes. What resulted was a choppy, overstuffed–like–Bob Dunston–at–a–BBQ half hour. The humor was as pedigreed as the guest stars. But it would take a lot more than Criss and Liz’s sex paper clips to hang it all together.

First, the fringes: Bryan Cranston was inspired casting as Ron, uncomfortably dumb friend to both Kenneth’s mother and a photo of Evel Knievel’s motorcycle. After a few years watching him descend into drama on Breaking Bad, it was a fun reminder of Cranston’s keen comic chops. (Interestingly, most of it seems to be about posture: Walter White leans forward and squints; Ron — and, heck, Dr. Tim Whatley — sits back and opens his face up wide.) But Cranston’s bumbling delight at being surrounded by celebrities and professionals more accomplished than the bears at Showbiz Pizza was outshone by the luminously goofy Catherine O’Hara as the woman responsible for bringing into the world the flesh vessel for an immortal being that is Kenneth Ellen Parcell. Not only did she ace all the dunce-y dialogue put in front of her (“Do you remember that kid in school who bullied you? Well, I ate that goat. Because we are family”), but she’s the rare comedic actress capable of making simple seem complex.

I was also happy to see professional good-sport James Marsden was still DFW (that’s down-for-whatever, not Dallas Fort Worth), including reenacting the grossest parts from Willem DaFoe’s filmography with liquid paper — even if he did leave most of his hair in Sag Harbor over the summer. The return of Liz’s Teutonic sex-apathy bummed me out for a time — one of the best things about her relationship with Criss was that it seemed to have banished body-horror Liz to the dustbin of history, along with Dennis and Dennis’s beeper store — but at least it melted away in a BDSM/OCD shower of blank CDs.

The harder sell for me was seeing Carlock — and, by extension, Fey — attempt to work through some pretty complicated feelings about job/life balance, the suicidal corporate flailings of NBC (where Sunday Night Football is now nothing but Cleveland Browns games), and whatever may have gone down backstage at Studio 8H vis-à-vis Sarah Palin and Lorne Michaels. Tracy Morgan slayed as the titular Governor Dunston, a change-eating buffoon with Whopper underwear and an inability to distinguish mer-men from Mormons. But while the backstage bickering over partisan bias seemed to be coming from someplace uncomfortably real, the partisan satire seemed unusually broad, especially on a night when the Kenyan-born Paul Ryan was somehow managing to avoid talking about his own soft jazz record (Sound of Seduction 2, for those keeping track at home). I get that Fey-as-Palin mostly hoisted the former governor on the transcript of her own petard (is that something you can do at Office Max?) but 30 Rock usually does better when it keeps its politics sharp and subtle, like when Jack bemoans his banishment into corporate obscurity like “a woman with children” or, you know, when he Skypes with a hungry horse. Matthew Broderick’s buffoonish Cooter and the fictional GOP’s “make fun of us until we’re sympathetic” strategy seemed forced, particularly in an election year when we expect better from our comedy shows, real or imaginary.

30 Rock is trying a lot in its last season and succeeding at much of it. There’s a bracing, pear-like taste of stakes in the “lose” part of Jack’s confusing win/lose baby/Obama tanking plan. But it’s not always possible to record DVD commentary while being vajazzled, you know?

Slowly — too slowly going by the recent ratings — Up All Night seems to be crawling and dragging itself toward a comedic POV that works for it. “Jerry Duty,” written by Chadd Gindin, surprised me with a number of light, lived-in laughs that, for a change, felt true to the Brinkleys’ yuppie fantasia of an existence: the ignored Evite, the Starwood reward points, the inevitable radish medley. But better jokes can’t obscure the buried pig at the heart of the show: the main characters are terrible people.

That sounds harsh, but at this point we have ample evidence. The default setting for Up All Night remains snipey judgment. There’s a part of the show that clearly expects us to sympathize with its litany of petty inconveniences — the horror of the enthusiastic college roommate who invites you to things, the irredeemable evil of the blandly rich white guy whose watch is too big — not merely laugh at them. It’s Comedy 101 to make fun of the entitled, but it’s far more challenging when the entitled parties can’t laugh at themselves. The worst offender by far is Christina Applegate’s Reagan, a character more monstrous than any flesh-rending ghoul on The Walking Dead. Consider the episode’s crescendo, in which Reagan attempts to diminish Ava’s high standards by torching her own husband like a marshmallow in a gas fireplace: his gross toenails, his sharp chin, his bizarrely emaciated frame (OK, to be fair that last one is mine). Whether the wit is meant to be biting or it’s still teething, sitcoms, on a basic level, have to be about people with whom we’d like to spend time. If you need me, I’ll be over by the craft beer bar at Jerry’s, digging into some delicious PolyGas cuisine. At least he knows how to make a guest feel wanted.

I dunno. Call me crazy, but I didn’t find this episode nearly as funny as Joe Biden did.

Filed Under: 30 Rock, Friday Morning Qb, NBC, Up All Night