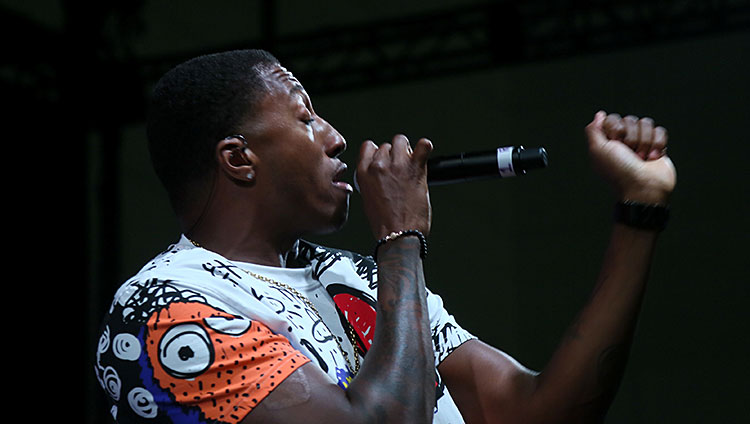 There is a scene in 2004’s Fade to Black in which Kanye West is presenting beats to Jay Z for his “last” album, The Black Album. Eventually, Kanye plays him the beat for the song that would soon become “Lucifer.” Jay perks up, loves the hook that Kanye has already written, and then enters the booth and begins rapping. Jay’s lyrics include:

“Jesus, I ain’t trying to be facetious”

“Vengeance is mine sayeth the Lord”

“Yes, this is holy war, I wet y’all with the holy water”

“And when I perish, the meek shall inherit the Earth”

“Lift up your soul or give you the holy ghost”

“Hope you been reading your psalms and chapters, paying your tithe, being good Catholics, I’m coming”

The song is chock-full of biblical references. He seems well-versed in verse, almost as if Christianity was a part of his background. But in the clip, when Jay exists the booth, he looks into the camera and says, almost with pride, “That’s my word, I never read the Bible in my life, I don’t even know how I know that.”

A year later, at the 2005 Grammys, Kanye performed “Jesus Walks” from his debut album, The College Dropout. The performance featured a pastor, an excited church congregation, Mavis Staples (singing about Jesus), John Legend, and the Blind Boys of Alabama singing the hymn “I’ll Fly Away” (the foundation of Kanye’s “I’ll Fly Away,” from the same album). Kanye West turned into an angel.

In that song, Kanye famously describes the risky nature of making a song about Jesus.

Neither his ends nor spins were negatively impacted by this song — it became a staple in his catalogue. But while overtly religious, both in terms of the music that shaped it and the man who sung it, “Jesus Walks” isn’t widely thought of as religious music. In fact, those in the religious community often shunned its existence, pleading to be dissociated with the song (as was the case when “Jesus Walks” was de-nominated for a Stellar Gospel Music Award due to a backlash).

Back when the song was at its most popular, Kanye was interviewed by the New York Times. It revealed a man with a complicated relationship with religion, even with the word “religion.”

Both Jay and Kanye have openly distanced themselves from religion in some way. This helped solidify their secularity. And they did so in different ways: Jay pleaded ignorance; Kanye overtly accepted of it.

The case of Jay and Kanye with regard to lyrics, Christianity, and acceptance help explain the phenomenon that is Lecrae.

Who is Lecrae? He has the no. 1 album in the United States. That album, Anomaly, is classified as Christian rap, because he’s widely thought of as a Christian rapper.

Not a rapper who is Christian, but a Christian rapper.

The success of Anomaly is the latest evidence of a noticeable trend. Three Christian-centric films released this year — God’s Not Dead, Son of God, and Heaven Is for Real — pulled in stunning box-office returns, currently the 33rd-, 34th-, and 24th-highest-grossing films of 2014, respectively. It’s clear there is a market for Christian-themed pop culture.

The film industry learned this with the rise of Tyler Perry, when he showed he could get two previously dismissed demographics (black audiences and Christian audiences) to come out in droves to the theaters.

On paper, Lecrae and Perry couldn’t be more different. But through a particular lens, Lecrae is rap’s Tyler Perry. Because, in Anomaly, like some of Perry’s films, the Christianity sneaks up on you.

Anomaly is a complicated album to analyze and listen to, because it’s difficult to think about it in a vacuum, purely as a piece of music. Before you hit play, chances are you understand you’re about to listen to Christian rap. And whether that’s a plus or a minus, it’s most likely a something.

Ultimately, you’re stuck with this question: Is Anomaly Christian rap?

Lecrae doesn’t think it is. In an interview with “The Exchange,” a program of conversations with Christian leaders, he stated, “I am a Christian. I am a Rapper. But Christian is my faith not my genre.”

He went on, echoing a similar sentiment to Kanye, saying, “It’s going to sound weird, but I’m not religious. I don’t like religiosity. I would research all kinds of organized religions, but God just felt like this tyrant: ‘Do this. Do that. Don’t do this. Don’t do that.’”

Unfortunately, for Lecrae, he only has so much control over the way he’s categorized. And because of that, the answer is still, yes he is a Christian rapper. Because with Christian music, there seems to be a one-drop rule. As in, if there’s one drop of vice — of unfavorable content — regardless of the representation of Christianity’s positive tenets, it ultimately becomes secular music. Lecrae’s status as a Christian rapper hinges on the fact that he never becomes a bad Christian, lyrically.

Anomaly is a Christian rap album, but contrary to what you’d expect, its primary theme isn’t Christianity.

If you let your mind wander, there are times when it feels like you’re listening to other rappers. “Say I Won’t,” to the distracted listener, sounds like a Childish Gambino song that could have been on Camp. The southern drawl and overt talk of inequality and blackness on “Dirty Water” channels Goodie Mob, David Banner, or Big K.R.I.T. In “Welcome to America,” Lecrae outlines the troubles of the have-nots in this country, recalling Jay Z and Kanye’s “Murder to Excellence.” And the first few bars on Anomaly easily could have been Drake lyrics, in their self-discovery and “Wait, who am I?”–ness:

Then there’s “Fear,” a song that sounds like nothing else.

It begins with Psalm 23:4, spends the majority of the lyrics alluding to death, God, and heaven, and gets increasingly unwilling to use metaphors to allude to Christianity, until it finally spills over.

This moment in “Fear” may be the most “I am unabashedly a Christian, hear me roar” moment of the album. It also reveals what Anomaly actually is. And this revelation is why Lecrae shouldn’t be thought simply of as a Christian rapper.

Without saying it — because it wouldn’t be very Christian of him — the “Jesus, Jesus, Jesus, Jesus, Jesus” is a cleverly devout middle finger to all of his haters. He’s directing it toward everyone who’s criticized him — for being too spiritual and for not being spiritual enough. This is what happens when you’re caught between genres. It’s this middle ground that makes Lecrae  different. And that feeling different — not Christianity — is what this album is truly about.

This album is part Dungeon Family, part King James. He’s trying to channel his musical heroes, in the most Christian way possible.

“There’s this dichotomy in trying to find yourself, and I felt that OutKast wrestled with that well,” Lecrae told Wondering Sound in the weeks leading up to the album’s release.

As a listener, you can sense that, even before you hear the “SpottieOttieDopalisciously”-inspired horns on “Anomaly,” or learn of his connection to the duo. If there’s something else he’s clearly learned from the genre-smashing Outkast, it’s how to embrace being different, and using that difference to connect.

Christianity isn’t universal. Feeling odd, misunderstood, and weird very much is. That’s the true foundation of this album, and that’s why it deserves its place in the mainstream. It’s why the album prompts the most skeptical of listeners to eventually let down their guard, to stop worrying about when he’s going to start preaching at them — the biggest hurdle for any piece of art with a perceived agenda.

He lets everyone in to experience a good album. A good rap album.

Men on Fire 101: The Revenge Thrillers That Shaped 'A Walk Among the Tombstones' and 'The Equalizer'