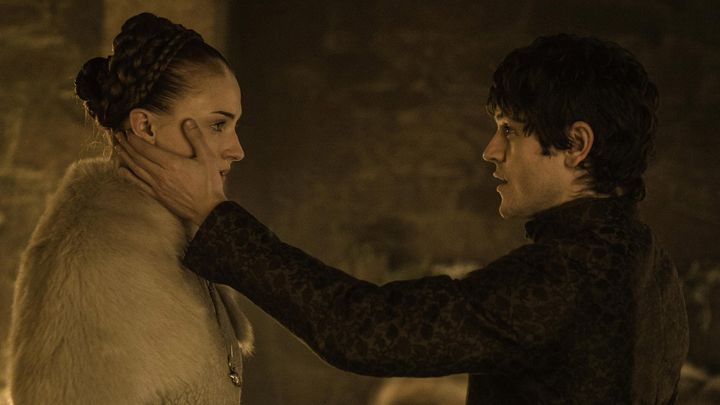 If you watch Game of Thrones long enough, you begin to notice when the show is telling you something. No, not the obvious lessons, like “Think twice before empowering a violent, self-scarifying army of religious fanatics” or “Never make life-or-death decisions before consulting with your nearest cock merchant.” I mean the moments when Game of Thrones steps outside of itself and nudges you about how, precisely, you should be watching it. Myranda’s “just us girls” talk at bathtime was, on the surface, meant to scare Sansa and remind the viewers just how awful Ramsay truly is. But it also accomplished the neat trick of equating anyone who dared complain about boredom with a glassy-eyed monster who hunts women for sport. “You’re so beautiful,” Myranda cooed, “but you need to keep him happy. Ramsay gets bored easily, and you don’t want to end up like … like the others.”

Be patient, in other words. Trust us: We know what we’re doing. It’s a common sentiment among the showrunners who agonize over the weekly feast-or-famine deconstructions of their work online. (Hell, it appears to be a common sentiment among faceless assassins who force princesses to bathe cadavers.) And there’s something to it: How is it possible to judge a journey when you’re utterly ignorant of the destination? It’s a particularly sensitive topic for Thrones’s David Benioff and D.B. Weiss, who are tasked with the near-impossible assignment of squeezing thousands of pages of narrative into a scant 10 hours of TV every year. Sometimes their work is elevating and transporting. Sometimes their work is just that: work. As Cersei reminded us, there are 1,000 miles between Winterfell and King’s Landing, and somehow Game of Thrones has to traverse them all — and more! — with great speed, clarity, and flair. Is it any wonder that it sounded like the writers room speaking through Bronn when, miffed at Jaime’s inelegant interruption, he cried out, “This song really is all about the ending”?

I believe him, just as I believe Benioff, Weiss, and their scorned idol, George R.R. Martin, when they assure me that all of this intercontinental warging is leading to something meaningful and grand. But “Unbowed, Unbent, Unbroken” was not a good advertisement for the trip. It was easily the weakest episode of what had been a rather magnificent season, and an unfortunate reminder that sometimes the only way to see the indescribable view from the top of the Wall is to take a rickety elevator. Take the Arya business, for example. I am fully invested in the idea that the pluckiest tomboy from Winterfell needs to become someone else entirely if she’s going to survive this Game of Thrones, let alone emerge triumphant. But it’s amazing how quickly the whispery shadows of the House of Black and White went from intriguing to claustrophobic. I suppose it’s all a question of tone, particularly when it comes to Arya’s companions. The Hound was violent and brutish, but at least he cursed a lot and was up front about his love of chicken. Let’s be honest: Jaqen H’ghar, in his natural, candlelit element, comes off as kind of a doof.

It’s not as if one replaced the other, exactly: The Hound wanted to sell Arya, while Jaqen seems sincere in his desire to teach her. I just wish that somewhere in his Batcave of human faces, Jaqen1 found room to stash a sense of humor. (“Is a girl ready to give up her ears, her eyes, her tongue?” Can’t speak for her, but this boy’s eyes are rolling too much right now for easy removal.) One of the best features about Game of Thrones is the way it refuses to indulge in the high-minded pomp that can render fantasy unbearable: all the noble mages and lawful paladins polishing each others’ staffs. The House of Black and White is thankfully free of spellcasting, but the sanctimony is as free-flowing as that magic fountain. I’m far more curious about who Arya is going to be when she finally emerges than in any Nic Cage–ish high jinks that may occur in its halls.

What Arya went through last night was an unfortunate callback to one of Game of Thrones’s most exhausting habits: the idea that the most important lessons to learn in life are also the ugliest. (This goes double for what happened to Sansa. More on that heinousness soon enough.) Case in point was Arya’s smooth-talking of the angel-eyed dying girl. Was getting her to drink the doom-water a small kind of mercy? I suppose. Just as it was a kind of kindness to fill the poor kid’s head with visions of commonality and empathy and shared sacrifice: an army of Heroic Dadbods traversing the continent in search of a magic fountain and an eternal cure! With liberty and Wilco for all! (Contrast this made-up story with what Stannis actually did for the daughter he loved.) But just because Kid A is heading to Point B doesn’t mean that you have to volunteer to play Charon, you know? The old Arya had a purity of vision: She knew about death and made a list of who deserved it. This new person she’s becoming feels vague and nihilistic. (Yes, valar morghulis — but don’t all men also have to live?) I want to see Arya become a better version of Arya. Not a blank canvas onto which a humorless death cult can paint its masterpiece.

Yet if Arya’s adventure seemed to drag, Jaime and Bronn’s suddenly hit fast-forward. Gosh, their timing truly was remarkable: Arriving at court at the exact same moment the Sand Snakes bare their fangs? But, again, Game of Thrones is a TV series. Hiring Murphy as your showrunner might result in something closer to real life, but god, would it be unsatisfying. (Poor Brienne would still be wandering around a grassy field trying to find a single Stark girl.) What bothered me was how rushed and stilted the resulting battle seemed. Whips! Daggers! A girl we’ve never seen before kissing a brand-new guy! As I said above: There are only 10 hours of screen time per year. There’s simply no way for Game of Thrones to service every story, but this felt particularly shoddy. Far be it from me to ask for less world-beating detail — I am, after all, the guy who went into ecstasy at the sight of a few floating melon merchants — but I would have happily traded the scenes of Arya dispensing corpse-manicures for a few more contemplative, scene-setting moments in Dorne.

Thank goodness at least for the return of Diana Rigg’s Lady Olenna Tyrell. No, she was unable to talk sense into the completely over-her-head Cersei. But at least she could talk! I love the way Cersei, like all bullies — be they physical, verbal, or merely wine-brave — can dish it out but is completely unable to take it. Is an old lady calling you a tart really worth going to war over? And so what if Olenna saw through your shoddy Dad-imitation? Scribbling at a desk doesn’t make someone Tywin any more than speaking in a British accent makes me Madonna. Under Olenna’s withering glare, Cersei’s entire scheme was reduced to a Family Circus gag. Was it any surprise that Loras and Margaery ended the hour in chains? No, really: Was it any surprise at all? This is another plotline that feels scrunched and rushed. Like Bronn’s dirty song, it’s more about the end than the middle.

But then we reach the finale of the episode and are left to wonder if Bronn, and really everyone involved here, ought to be a little less enamored with boffo conclusions. That Sansa was willing to transform her role in the Game of Thrones from bystander to tragedy to full-on victim of it was clear enough. She had said as much to Littlefinger and did seem to be no longer merely resigned to her fate. After all, she was in her home (or what’s left of it), and, in the buildup to her second nightmare wedding, she flashed Myranda with a bit of her parents’ imperious spunk when she refused to cower at the telling of Ramsay’s horrific exploits. Despite the context in which she repeatedly finds herself, Sansa in Season 5 is more than just a regal pawn. She’s a living embodiment of the North, where the motto is about remembering — which is really a nice way of saying they’ve learned the hard way how to endure a lot of awful shit.

But I don’t think there’s really any storytelling acrobatics that can forgive what happened next, particularly when it all seems so clear where it’s going. Or was that itself the trick? That instead of giving the audience the sight of what we’ve long wanted and expected — Reek reclaiming his essentially not-terrible Theon-ness by stabbing Ramsay in the throat — we were given something not needed at all? Sansa’s anguished screaming as she was violently assaulted by her new husband was hideous, full stop. But it was almost worse the way Jeremy Podeswa’s camera lingered on Alfie Allen’s tear-filled eyes, as if his violation was somehow equal to Sansa’s; as if this disgusting act was somehow part of Theon’s long and ugly path to redemption, not a brutal and unwarranted violation. Five seasons in, Game of Thrones is long past the point of earning gold stars simply by showing us the worst possible thing. There’s a fine line between exposing the dirty truth of the world and wallowing in it.

Look, there’s no question that the mushy middle is always the part of the season in which Game of Thrones tends to become as bogged down as Daenerys in Meereen. But what felt so liberating about the past five weeks was the way the show seemed to have moved past its rough binary of rocks and hard places, of frying pans and wildfire. Now, with Arya and Sansa, Thrones is backsliding hard. I appreciate Benioff and Weiss’s willingness to do unpopular things, but there’s nothing essentially brave about violence, no intrinsic depth to pain. This disappointing episode ended exactly where a better one would have begun. Terrible and majestic things happen, fine. Songs build to crescendoes, jokes lead to punch lines, attackers leave scars. But so, too, does patience have limits. Tyrion was being glib, but, in his inimitable way, he voiced the most profound question of anyone in the Seven Kingdoms, in front of or behind the cameras. “And then what?”