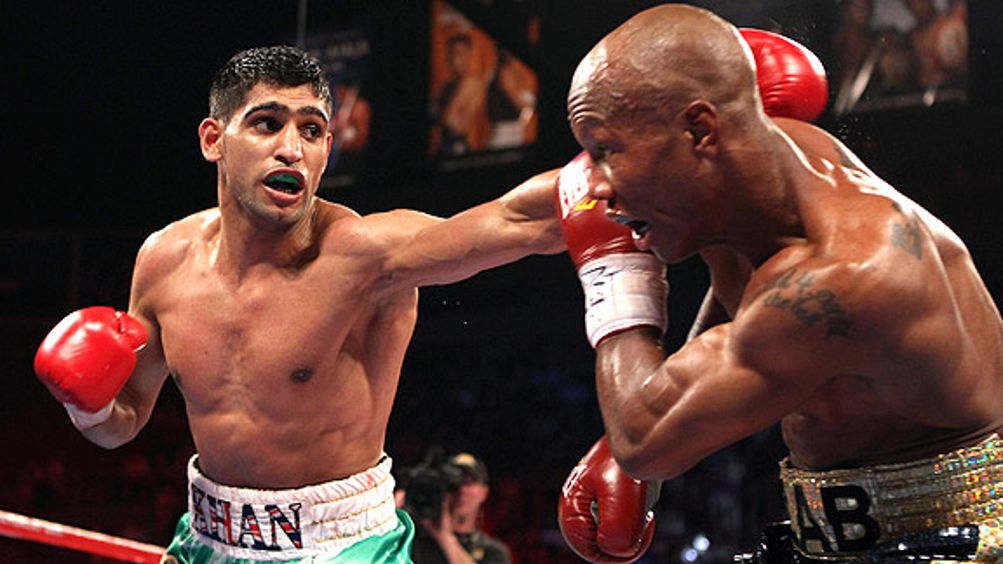 Boxing witnessed a rarity on Saturday night in Las Vegas: not just a fight of relative consequence — when the dominant English junior welterweight Amir Khan faced American part-champ Zab Judah — but a body-shot knockout. In the fifth round, Khan lifted a right hand directly into Judah’s beltline. It was one of those singular punches that boxing’s remaining fans will talk about for a long time. Everyone will remember the night when Zab Judah’s bladder exploded. It was awesome.

After, Judah said it was a low blow, but it wasn’t. (He would have had a stronger case had he claimed that Khan dropped an elbow into his back right before the finishing punch, which he did.) It was just a fast, technically perfect punch tossed into the dead center of Judah’s soul. For punch connoisseurs, it was a thing of beauty.

Only its location might have been improved. I don’t mean the head. Head shots are overrated. Body shots are the essence of great fundamental boxing, the heart of it. And great body shots — all-time body shots — are almost always delivered to the ribs. Better yet, they’re delivered to that soft little target on a man’s right side, where, for whatever biological or evolutionary reason, a few square inches of his liver have been left exposed.

Making the short list of the modern era’s all-time body shots, the 1998 punch thrown by Roy Jones Jr. into Virgil Hill’s left kidney is probably the first to come to mind.1 That’s not wrong, exactly. That punch knocked out Hill for the first time in his long and mostly very good career, but more important, it was impossible to forget how it looked: There was something both awful and thrilling about watching Hill in those seconds after, trying to crawl into the canvas, his glove pressed to his broken side. Even in boxing, we rarely see pain like that. We see hurt, mostly. There’s a difference.

“Sometimes when you’re hunting, the shotgun makes a sound like that,” Jones said of his handiwork. “But I’ve never heard anything as devastating as that, or I would have given up hunting a long time ago.”

Micky Ward was a great body puncher;2 Arturo Gatti had a permanent knot, like a tumor, grow in his stomach after their epic trilogy finished in 2003.3

Ricky Hatton also has an outside claim to the body-shot title with the precision left hook that he put into Jose Luis Castillo’s liver in 2007. Hatton went for that spot time and again during the opening rounds of that fight, leaving himself vulnerable to counters. “I should have shown a bit more caution,” Hatton said after. But throwing that liver shot is like aiming for the target on a dunk tank. Finally, in the fourth round, he connected perfectly. Castillo twisted away and went down on one knee. The referee counted him out, shouting in his face — Ocho! Nueve! — and Castillo never once looked like he was going to get back up, because he wasn’t.

“It just about cut him in half,” Hatton said.

But my all-time favorite body shot is the one Bernard Hopkins delivered to Oscar De La Hoya in 2004. It came in a big fight. It was the textbook left hook-to-the-liver combination that fighters dream about. It came shortly after some really loud guy in the crowd called it, yelling “BODY SHOT!” over and over again. It was perfect.

Watching it again now, I love the brutality of it — and if you’re a boxing fan, you might as well admit that, deep down, you’re in love with the brutal — and I love how long it left De La Hoya on his knees, hitting the canvas with his fists. A head shot puts a man to sleep. A body shot makes him wish for it.

But they’re beautiful precisely because of their rarity — because they’re so fundamentally sound, because they require discipline and technique and art. Body-shot knockouts are boxing’s equivalent of a great wraparound, open-field tackle in football, or those nights when Michael Jordan went after Grant Hill’s ankles, because Jordan knew that’s where Hill’s worst weakness hid. They display an intelligence, a determination, a self-control that, for me, is far more impressive than fireworks.

They tell me that I’m watching a man who isn’t worried about how things look; he’s more concerned with how things feel.

Previously from Chris Jones:
The lost magic of Bartolo Colon
Ayrton Senna and the sports documentary of the year
The sad state of the Blue Jays
Hope for the Orioles