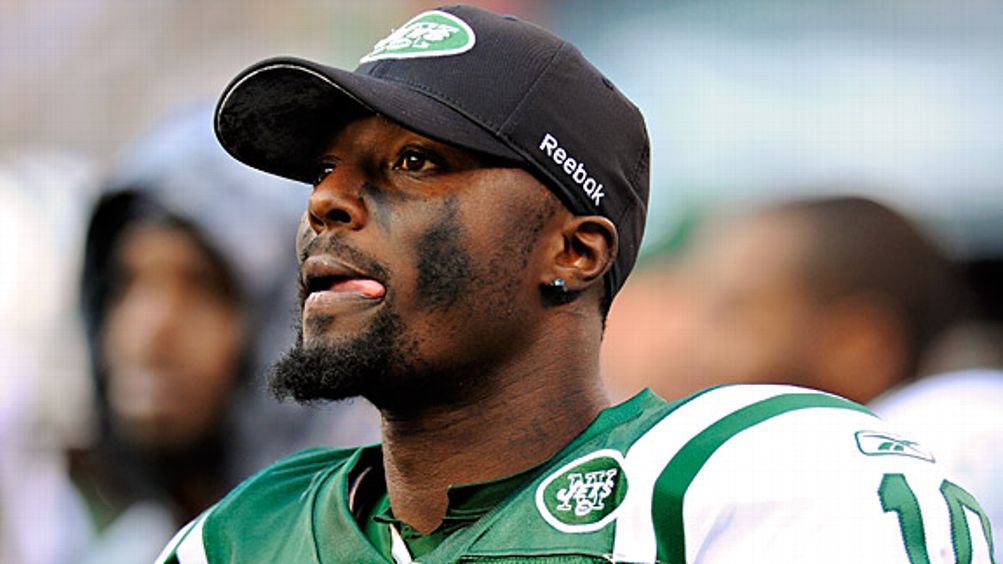 As Day 2 of the NFL’s madcap free-agent bonanza came to a close, teams started to show their cards. For the teams at the top of the market, broader, more extensive plans were revealed. While one general manager appears to be conducting a myopic, sentiment-filled spending spree to try and retain his job, a superior GM is moving his chips into the middle by maxing out his budget for exactly the right players, totally avoiding sentiment in the process. Now, he just needs Nnamdi.

The Jets, who are in position to pull off an incredible double move by signing both the best offensive free agent and best defensive free agent available in the marketplace. With a veteran core that came within one game of the Super Bowl for the second year in a row, it would have been easy for the Jets to rest on their laurels and simply lock up the players on their roster who were hitting the free-agent market. Instead, Jets general manager Mike Tannenbaum has put the team’s money where Rex Ryan’s mouth is — if they actually do go sign Nnamdi Asomugha, they’ll have the best one-two punch at cornerback in league history. They’ll also be the league’s best team on paper.

First, Tannenbaum successfully identified that the only Jets free agent he needed to make a priority was Santonio Holmes. The Jets locked him up on Wednesday with a five-year deal that guarantees him $24 million, a financial guarantee only surpassed by Larry Fitzgerald ($30 million). It’s a lot to pay for a receiver who has yet to make a Pro Bowl, but Holmes’ performance has been of that caliber over the past two seasons: If you translate his 2009 and 2010 lines into a 16-game season, he caught 75 passes for 1,139 receiving yards and six touchdowns. Holmes had a better DVOA and catch rate1 than teammates Jerricho Cotchery and Braylon Edwards. (The Jets have been so disinterested in Edwards that he actually went to Twitter to complain about it before quickly deleting his tweet.)

At 27, Holmes is just now entering the peak of his career. He’s been extremely healthy as a pro, missing just two games due to injury during his five-year career. Even if Holmes was to get suspended and miss a season, he might not miss much more time than an older free agent might have missed on account of declining skills or injury.

The Greatest Defense of All Time?

Without a great pass-rusher, the Jets were still able to finish ninth in sack rate2 thanks to Ryan’s exotic blitz packages and great downfield coverage.

They still don’t have that elite rusher on the roster, but adding Asomugha would allow Ryan to blitz in virtually every passing situation while daring teams to throw at his pair of dominant cornerbacks. The Jets could just about cover the field on most plays with as few as three defensive backs, allowing them to send up to eight players on blitz packages. Opposing offenses will have to counter by sending more receivers out into the slots, flooding zones and preventing Asomugha and Revis from locking down their sides of the field on their own. But that creates situations in which quarterbacks and offensive linemen will have to read intricate blitz schemes before the snap without the security of extra blockers, pushing the advantage towards the Jets again. It would be a fascinating chess match on every passing down, and as a football fan with no vested interest in where Asomugha goes, it’s hard to root against the idea.

What it’s Going to Take:

The Jets need both Holmes and Asomugha to leave money on the table. Holmes reportedly turned down a deal that would have guaranteed even more money than the $24 million the Jets gave him, and the cap hit for his deal in 2011 will be just $2.45 million. The team can carve out even more space by renegotiating the deal of LaDainian Tomlinson and negotiating a long-term deal with linebacker David Harris, who currently has the franchise tag and a cap hold in excess of $10 million. If the Jets can pare down those figures, they’ll have enough money to make a serious run at Asomugha. Give Tannenbaum credit for sculpting his cap to maximize his team’s chances of winning a Super Bowl in 2011, and give Rex Ryan credit for fostering a culture that inspires players to make sacrifices to play in New York.

A Cannibalistic Frenzy: How to Overpay for Your Own Terrible Team

Panthers GM Marty Hurney wants to keep his job after a disastrous 2010 that saw him pay Jake Delhomme millions of dollars to go play for the Browns. To do so, he’s gone on an absurd spending spree that’s seen the team drop in excess of $100 million in contracts paid to lock up the core of a team that went 2-14 last year.

In a vacuum, some of the moves are defensible. We discussed the mammoth Charles Johnson deal yesterday, and while it was an obscene amount of money, it’s not the worst thing in the world to bet on a young pass-rusher who’s shown a lot of promise. Hurney followed that contract today with a five-year deal for linebacker James Anderson, who, in his first year as a starter, might have been the defense’s best player in 2010. That deal guarantees Anderson just $8.5 million, so it’s not an enormous commitment, even though Anderson is already 28. Both of those moves could flop, but they’re defensible.

Unfortunately, Hurney didn’t stop there. Anderson made his way into the starting lineup only after starting linebacker Thomas Davis tore his ACL in June, his second ACL tear in eight months. As a former safety, Davis was already an undersized linebacker who relied upon his speed to make plays, so it would have been reasonable to wonder if he would come back as the same player he was in 2007 and 2008. The Panthers had the ability to find out for relatively cheap, with Davis signed for the 2011 season at a figure of just $3.2 million. Instead, Hurney ripped up Davis’ contract and gave the 28-year-old a five-year deal, for which terms have not yet been disclosed. It really doesn’t matter what the terms are, to be honest, because it’s just insipid to give a long-term contract to a guy coming off of consecutive ACL tears.

Wait, How Many Running Backs Can You Have on a Roster?

It got worse. Wanting to ensure an effective ground game for first overall pick Cam Newton, the Panthers went out of their way to re-sign veteran halfback DeAngelo Williams, giving another 28-year-old a ridiculous five-year deal. Williams got $43 million in his extension, with an incredible $21 million in guaranteed money. It’s an unconscionably dumb decision. As a starter, Williams has made it through a 16-game season without getting hurt exactly once. The team drafted Jonathan Stewart in the first round of the 2008 draft to take over as the primary starter after Williams left, and they got effective play from Mike Goodson as a change-of-pace back after Williams went on injured reserve with a foot injury. The team’s running game declined in 2010, but it really wasn’t because Williams wasn’t there. They fell off because they had no quarterback, no leads to run the clock out on, and injuries all along the offensive line, especially with elite right tackle Jeff Otah missing the entire season. A healthier offensive line in 2011 will mean a more effective running game for the Panthers, but they’ll be paying far too much to their running backs for the privilege.

The biggest mistake the team made was paying for a veteran kicker, signing Olindo Mare to a four-year deal worth $12 million. Mare has a strong leg, a consistent skill that produced a touchback 27.8 percent of the time last year, the fifth-highest rate in the game. That’s a valuable asset, but it’s going to be far less important in 2011. The league moved kickoffs from the 30-yard line to the 35 in March, a change that will turn plenty of would-be returns into touchbacks. Mare will still rank among the league leaders in touchbacks, but the difference between him and the league’s average kickers will be muted.

The Panthers won’t be 2-14 next year. Teams simply bounce back from year-to-year because the breaks that pushed them into the gutter will begin to start going their way again, a phenomenon Bill James coined the “Plexiglass Principle”. The Panthers will almost surely be a healthier team in 2011. They were in a division with three teams that each outplayed their Pythagorean expectation,3 so their schedule shouldn’t be quite as tough as it might seem right now. They probably aren’t going to repeat the turnaround exhibited by the 2008 Dolphins, but going 6-10 shouldn’t be a problem, even with Jimmy Clausen and Cam Newton at quarterback. Still, it’s hard to figure how this spending spree has turned them into a better team.

Watch, as the Seahawks attempt to set the world record for sticking the most forks into one light socket! The five-year, $41-million deal that Seattle gave Sidney Rice on Wednesday is just the latest in a series of huge wide receiver contracts shelled out by the Seahawks. So far, those contracts have had one thing in common: They’ve all failed. It’s the curse of Darrell Jackson.

It’s now Rice’s turn. Ironically, he only got his chance to emerge as a star in 2009 because Seattle outbid Minnesota for T.J. Houshmandzadeh. If the Vikings had gotten their wish and signed the veteran Bengals receiver, Rice would’ve spent his season playing behind Housh. Instead, Rice broke out with one of the most impressive and unexpected seasons in recent memory, ranking among the league leaders in virtually every statistical measure.

The problem, of course, is injury.

Day One of The NFL’s Madcap Free-Agency Period

The lockout’s over! Now the glorious NFL’s free-agency period begins. Our breakdown of every relevant player and where they could go.

Rice missed the first half of the 2010 season after undergoing hip surgery. When he came back, he was far from 100 percent, catching just 40 percent of his targets while struggling mightily to create separation at the line of scrimmage. He should be healthier after an offseason of rest, but he’s missed a quarter of his pro career so far with various injuries. Rice is only 25, so the Seahawks should be getting his peak performance during the length of this contract, but skill position players with this sort of injury history at the beginning of their career never age well. Perhaps Rice will buck the trend, but the Seahawks are making exactly the sort of investment that has repeatedly failed for them over the past several years.