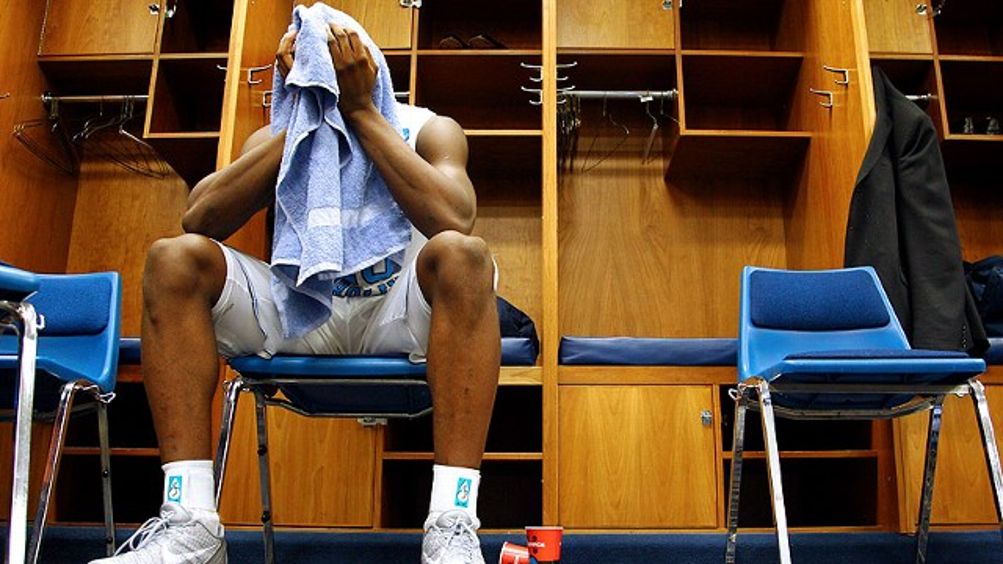 Harrison Barnes came into my life on a Friday afternoon in 2009, when he held a press conference to announce his decision to attend the University of North Carolina. I’ve always held a perhaps unhealthy fascination with these Signing Day spectacles — they are tacky and weird and self-serving, sure, but there’s something undeniably great about seeing a 17- or 18-year-old kid take his first public step toward greatness, bust-infamy, or the quiet, dark space of unmet expectations. Barnes, who in a recent Atlantic article admitted that one reason he returned to North Carolina for his sophomore season was to enhance his “brand,” certainly proved himself to be the showman. After a long speech thanking every good thing in God’s academic world, Barnes announced, “The school that I choose to be my alma mater, indeed, the place where I will leave my legacy, had the right balance of both academics and basketball that which I thought I could achieve the goals I wanted to pursue. Today, I’m proud to announce the school I will attend in the fall of 2010 will be the coach I’m going to Skype … ”

And with that, ol’ Roy Williams and his Tar Heel basketball team were projected onto a giant screen and all of North Carolina joined in a chorus of “Hark the sound of Tar Heel voices ringing clear and true … ” My phone began filling up with text messages from friends from Chapel Hill, the crowd in Ames, Iowa, Barnes’s hometown, cheered lustily, and I put my head in my hands and felt a bit uneasy. Not because I doubted Barnes’s basketball abilities (that would come later), but because there had been something a bit too polished and produced about the entire thing. Call me a sentimental old softy, but I’ve always preferred the version where the kid from the sticks of Georgia or the farmland of Indiana sits in front of a table, sweats nervously, and mumbles through some inaudible thank-yous before he’s swarmed by 15 relatives and his 250-pound mother.

It’s necessary to point out here that the Barnes who held that press conference was a precocious 17-year-old honors student who prided himself on thinking of basketball as a business opportunity. Why wouldn’t he? That’s the logic of elite athletics these days — reduce everything to business, thereby enabling you to respond to every query with the always-logical response: “It’s a business.” It’s just as important to point out that this Harrison Barnes, who shot 8-for-30 from the field in his last two games at Carolina, will not turn 20 until the end of May. He’s a kid, and like all kids — especially talented ones — he’s more a product of the adults in his life than anything else. While I won’t go as far as to say that the Harrison Barnes branding project, which began in earnest during his junior year in high school, caused its main actor to miss all those shots, I do think it’s worth wondering exactly how a smart, talented basketball player became so wrapped up in his own legacy.

It became a problem. In the Atlantic piece, Barnes admitted his reluctance to talk about his faith or his political leanings because he didn’t want to polarize the public. There’s certainly nothing logically wrong with this thinking — Jordan and Jeter built their brands using a similar line of thought. The difference, of course, is that Jordan didn’t say, “Republicans buy shoes, too” when he was still living in a dorm room in Chapel Hill. This is where the flattening logic of business turns into insanity. It’s crazy that Barnes was thinking about his brand before he played a minute of college basketball. It’s crazy that when Barnes struggled mightily during his freshman year, he was still thinking about that brand. And it’s crazy that before the NCAA tournament, Barnes felt the need to broadcast his brand through a national magazine by talking, of course, about his brand. The “all-business” rationale falls apart when the business is purely speculative. After two disastrous games in the NCAA tournament and a largely disappointing sophomore season, what, exactly, is the Harrison Barnes brand? What endorsement opportunities does he have right now?

It’s easy to blame all this weird, precocious ugliness as well as Barnes’s basketball troubles on the “fast-paced media,” high school recruiting, and big-time college athletics, but the somewhat liberating truth is that Harrison Barnes just wasn’t a great basketball player. He was good, sure, and shot the ball with a confidence that went far beyond his youth, but he never really developed any other part of his game. He’d go crashing into the boards and pull down a jaw-dropping rebound, but then he’d follow that with 10 minutes of standing around on defense. He never figured out how to get to the basket. He never found a way to reliably distribute the ball in transition. Instead, Barnes’s improvements were the sort that could be easily dispensed through the media. He put on 15 pounds of muscle between his freshman and sophomore years. He “committed himself to defense.” He “came back to win a national championship.” He did everything he could do to build the perception that he was competing the right way. But he did not really improve as a basketball player.1 Before Kendall Marshall, the most gifted passer in college basketball, came along, Barnes was pretty much the player he was this past Friday and Sunday. It’s not entirely fair to judge Barnes in two games without his point guard, but it’s particularly damning that a lottery-bound perimeter scorer couldn’t create his own shot against the mighty Ohio Bobcats. On Sunday, in the biggest game of his career, Barnes missed his last six shots and looked lost when the game was on the line.

This wouldn’t be a problem if Barnes were Anthony Davis or even Andre Drummond — the evidence of his physical abilities would overwhelm everything. But Barnes’s appeal and part of the brand he’s been building over the past two years is that he’s the thinking man’s athlete. Who but Barnes would give an interview to The Atlantic? What other basketball phenom would think himself into a pretzel and decide that the best way to promote Harrison Barnes, the brand, would be to talk about Harrison Barnes, the brand? Especially when every other super-athlete who talked openly about brands has been met with the public’s wrath? Derrick Rose, the antimatter to the brand-building NBA, just signed a $200 million shoe contract. Hasn’t it become clear that the way to really build your brand is to breathe basketball, win championships, and throw a couple very public shots at LeBron & Co.? Again, I don’t think any of this myopia is Harrison Barnes’s fault. We live in a cannibalistic era where sports news exists only for its own sake, and therefore every bit of information about a 17-year-old phenom gets inflated and distorted. Harrison Barnes, at the age of 17, believed he was an NBA brand because everyone in the country already assumed he’d win the Naismith and go on to be the first pick in the draft. But all those interviews, all those press conferences, and all that hype had their effect. Barnes was always a bit too cerebral, a bit too meta about basketball — it shouldn’t be surprising that the basketball was always what suffered.