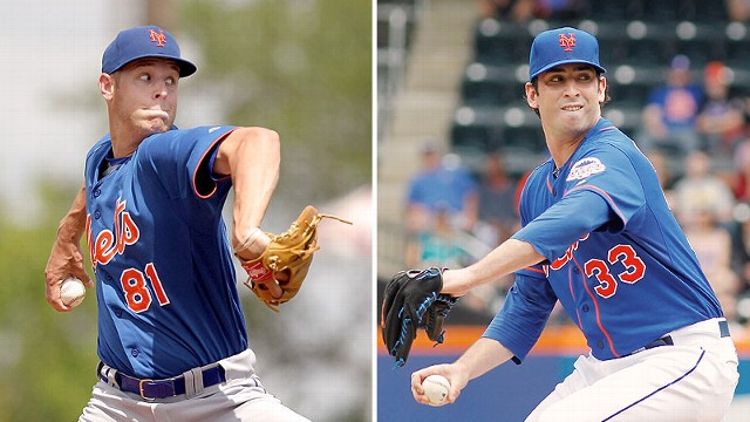 Today is a good day to be a Mets fan. Not in the sense that the Mets are good right now; they’re pretty awful this season and don’t look to contend for another year or two. But today? Today, the Mets start not one, but two potential ace starting pitchers in a doubleheader against the Atlanta Braves.

The afternoon starter you probably know by now. Matt Harvey, 24, is already one of the most effective and exciting starting pitchers in the National League, striking out more than five batters for every one he walks thanks to a 96 mph fastball, a backbreaking slider, and enough swagger that you expect him, after his pregame warm-ups, to emerge from the bullpen through saloon doors with spurs on the heels of his cleats.

But in the nightcap, the Mets are giving Zack Wheeler his major league debut. Maybe you’ve heard of him too. He was the no. 6 overall pick in the 2009 draft, ahead of Shelby Miller, Mike Minor, and Tyler Skaggs, among others, and he was famously traded to New York in 2011 for Carlos Beltran in a bit of deadline desperation from Giants general manager Brian Sabean. Since the trade, Wheeler’s spent his minor league career striking out more than a batter an inning. ESPN’s Keith Law rated Wheeler the no. 13 prospect in baseball before the season and no. 15 in his update a few weeks ago.

Wheeler’s pitch mix is not particularly unlike Harvey’s, with a mid-to-upper 90s fastball, a changeup, and two breaking pitches. While Harvey relies more on the hard slider, Wheeler’s top breaking pitch is a hard-breaking curve that comes in 20 miles an hour slower than his fastball. But the two are similar in ability, and having one of these guys coming up is exciting. Having two at the same time must make your vision go blurry.

Mets fans are rightly giddy about having such an embarrassment of pitching riches, and it’s easy to dream Harvey and Wheeler to the top of a playoff rotation two or three years from now.

Or at least it would be, if not for Generation K. For those who don’t remember, the Mets had three killer starting pitching prospects back in 1995: right-handers Jason Isringhausen and Paul Wilson, and left-hander Bill Pulsipher. They were supposed to rescue a franchise that had had, up to that point, kind of a rough decade. Posters were printed, arrangements were made, and a nickname was coined — precisely the kind of too-earnest, not-clever-enough moniker that was so at home in the mid-’90s it might as well have worn an unbuttoned flannel. Those were heady days in Queens.

It was shocking how quickly it happened, and that sense of bewildered disappointment comes across in Tom Verducci’s 1997 Sports Illustrated piece on what went wrong, both physically and mentally, for the Mets’ three would-be aces. You’ll find the usual — bad mechanics leading to injury, bad control leading to ineffectiveness, and bad decisions leading to, in Isringhausen’s case, a broken wrist from punching a trash can.

Isringhausen, as you know by now, reinvented himself as a closer with the pre-Moneyball A’s and went on to save 300 games in the major leagues. Not a shabby career by anyone’s standards, but when the Mets brought him up, “good reliever for the A’s and Cardinals” was probably not the career arc they were hoping for. Pulsipher pitched 126⅔ innings in 1995, but got hurt and didn’t return to the majors for two years. He never again posted an ERA less than 5.00.

If Generation K were a boy band, Paul Wilson would have been its Chris Kirkpatrick. Despite being the no. 1 overall pick in 1994, Wilson is often forgotten, perhaps because he’s the only one of the three without a ridiculous last name. Wilson, like Pulsipher, had a pretty full rookie year, but injuries forced him out of the majors for three years. He wound up having an OK career as a back-end starter for Tampa Bay and Cincinnati. In the end, Wilson started about three times as many games as either of his Generation K compatriots, and despite pitching in seven big league seasons to Isringhausen’s 16, threw almost as many innings.

None of this is to say that Wheeler and Harvey are doomed to injury and failure — even in the past 15 years, medical science has advanced to the point where Pulsipher’s career might have been salvaged, or Wilson’s or Isringhausen’s improved. Plus, none of the three pitchers of Generation K was ever as good as Harvey has been this season, and it stands to reason that when he comes back to normal (which he must, because there’s no way anybody can keep up like Harvey has all year), he won’t drop down to a 5.00 ERA.

So don’t fear, Mets fans. Wheeler and Harvey might not turn into Seaver and Koosman, but you’re more likely to forget about Generation K than you are to relive it.