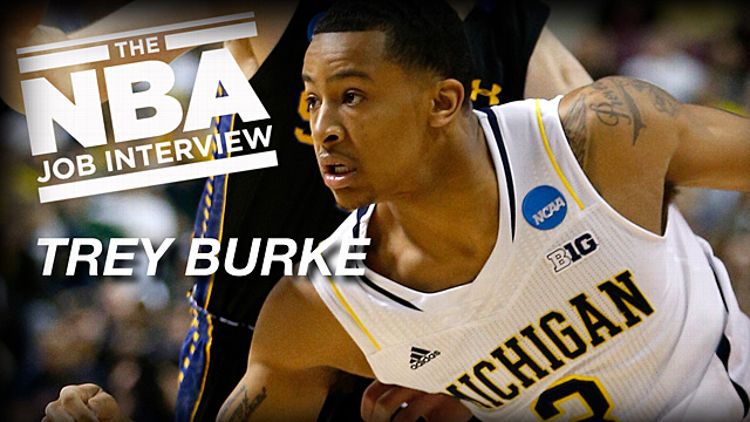 Bill Simmons and Jalen Rose grill Naismith and Wooden award–winning NBA draft prospect Trey Burke about his lack of size, the chip on his shoulder, and dating celebrities. Check out a short clip below, followed by Brett Koremenos’s scouting report and the full-length video. And watch this space for more NBA Job Interview videos, featuring Bill Simmons, Jalen Rose, and some of the best young talents from the 2013 NBA draft class.

No player had more buzz coming out of the NCAA tournament than Trey Burke. After an excellent regular season, the Michigan guard delivered some gritty performances during March Madness, leading his Wolverines to the national title game. To top it off, Burke won the Wooden Award, given to college basketball’s most outstanding player, making him seem like a can’t-miss prospect.

There are certainly a lot of things Burke does well. According to Synergy Sports, Burke was one of the best catch-and-shoot players in the entire country, with an Adjusted Field Goal Percentage (AFG — which accounts for the type of shot) of 65.1. Unfortunately, given the amount he handled the basketball, this was not a skill that Burke was able to use often. Burke is also a capable pick-and-roll player, showing good setup before using the screen and a controlled pace when attacking off it. The problem, however, is that while solid technique gets Burke shots at the rim off pick-and-rolls, a lack of elite athleticism hinders his finishing ability — similar to Milwaukee’s Brandon Jennings. This is something that will only be exacerbated at the next level, where longer, taller, and more athletic defenders await the 6-foot-1 guard. Burke also struggles both attacking with more than one or two dribbles and passing with his left hand, a real concern given the sophistication of NBA defenses.

Given these limitations, the biggest question facing Burke is what type of player he’ll try to be. If he works hard to find a balanced shot/pass approach, he can likely be a winning player at the next level. If he tries too hard to play like a star, Burke will follow in the line of limited, shot-happy guards like Darren Collison or Jerryd Bayless.