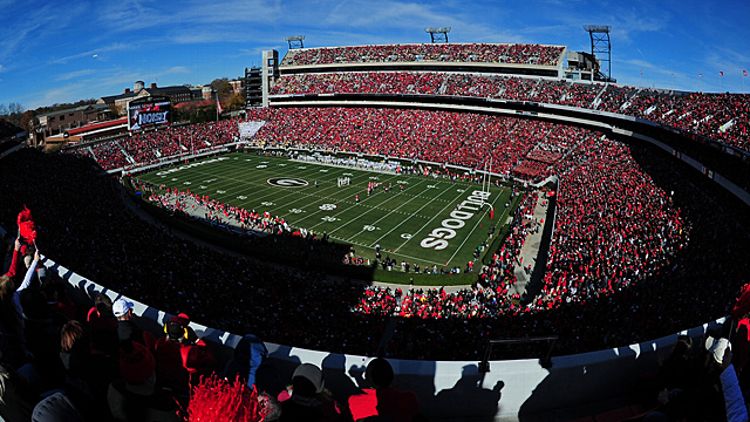 This is it, gang. This is the last Semi-Ignorant Guide of the year. Thank you for joining me on this ride as I spouted half-truths and outright lies, took credit for lucky upset predictions, and generally learned nothing of value. This, in the end, is what being a sports fan is all about. Let’s get right to the top 10 games (all times EST).

10. No. 16 UCLA at no. 8 Stanford (Friday, 8 p.m.)
I’ve told you before about my college football pool, in which 18 of us pick the 10 most prominent games each week against the spread. So far the leader has 68 points through 13 weeks, for an average just barely above .500. All but two people are at .500 or below. Some of us know football pretty well, others are clueless, but it doesn’t matter. It’s impossible to pick games against the spread. But over the course of the season, I’ve come to realize that Las Vegas knows everything. Every once in a while, there’s a point spread that seems absolutely ridiculous. Last week, when Louisville (undefeated in the Big East) was an underdog against Pittsburgh (1-4 in the Big East, 4-6 overall), everyone in the pool thought it was a gimme. The result? Pittsburgh won, 27-6. Somehow, Vegas knows all.

Which brings us to the Pac-12 championship. Last week, Stanford played UCLA on the road and won 35-17 in what felt like a pretty dominant thrashing. This week they meet again for the conference title, this time at Stanford. Neither team has huge injuries, nobody’s suspended, and no coaches are jumping ship. Literally the only difference is that the game should be easier for Stanford since it’s at home. It seems like they should win by 30. So what’s the line? Around 9 points. Earlier this year, I would’ve acted all cocky and said something like, “Free money!” Now? I still picked Stanford, but I’m reasonably sure they’ll win by a field goal on the last possession of the game. This is why nobody should gamble.

9. Louisville at Rutgers (Thursday, 7:30 p.m.)
Based on Rutgers’s poor showing against Pittsburgh, I predict that Louisville wins this one 20-17 with a late field goal.

8. No. 23 Oklahoma State at Baylor (Saturday, noon)
When I launch my college football–themed stand-up comedy career, my main bit is going to be about how there are 10 teams in the Big 12 and 12 teams in the Big Ten. Except it won’t be true after this year, so I’ll probably get booed off the stage. But I’ll have my dignity, unlike these conference realignment moguls.

7. No. 11 Oklahoma at TCU (Saturday, noon)
Wikipedia tells me that TCU’s Horned Frog mascot is named after the Texas horned lizard. You can see a picture here. The main “defensive behavior” of the horned frog is that it can camouflage itself. If a predator catches it, it puffs itself up and becomes spiky and hard to swallow. Which is ironic in this case, because that’s also Bob Stoops’s main defensive behavior.

6. No. 12 Nebraska vs. Wisconsin (Saturday, 8:17 p.m., in Indianapolis)
I’ve been watching more than my fair share of Big Ten games the last few weeks, and it completely blows my mind how often every single team will run the ball straight into the line on third down or fourth-and-1. It doesn’t matter if Brady Hoke or Bret Bielema or Bo Pellini or whoever is coaching. They just crash into that stacked line, and then look utterly confused when it fails. (Also, they all look like Neanderthals.) Hey, fellas, free advice: The defense outnumbers you by almost 2-to-1 at the line. Do something different. You make me angry.

In the book Guns, Germs, and Steel, Jared Diamond talks about the way different tribes in New Guinea would react to the introduction of new technology. Some would embrace it and use it for personal profit and community good, but other tribes would ignore it. So a group of people might see a helicopter fly in and land near their homes, and after staring for a second, they’d literally turn away and pretend it hadn’t happened. It was so foreign to their world, and probably so terrifying to consider, that they just sort of put a mental block in place to keep things the same as they’d been for centuries. There is no helicopter. And I think this might explain how the Big Ten has collectively reacted to advances in the game such as the forward pass. They just want to keep their simple existence going, in which everybody agrees to run into the line over and over. Actually changing and adapting frightens them. Anyway, all of this is just another reason why Urban Meyer is going to destroy the Big Ten for the next 30 years.

5. No. 21 Northern Illinois vs. no. 17 Kent State (Friday, 7 p.m., in Detroit)
MAC championship? OK. Somehow, mid-major-type teams don’t have the same romance in football that they do in basketball. In basketball, any mid-major win over a big team is a magical Cinderella story. In football, games like this are sort of annoying. I’m not sure when it changed, but I bet it has something to do with Boise State pissing everyone off with the tricky blue field. You forgot your humble origins, Boise.

4. No. 22 Boise State at Nevada (Saturday, noon)
The reason we need a 16-team playoff is that a game like this might actually be worth something. Here’s a fun story: When Boise State beat Oklahoma on that tricky modified Statue of Liberty two-point conversion in 2007, I tried to get “Discobolus” to catch on as a name for the play.

The QB was in a position somewhat resembling Greek sculpture, it kept the statue theme alive, and I thought it would be hilarious if I could get the name to stick. (When you have a crappy office job, this is the kind of thing that seems fun.) I wrote about the Discobolus play as though it were already used widely on the Wikipedia page for the Statue of Liberty play, and a Google search shows that the excerpt is preserved on a Red Sox message board, of all places:

A similar play was used by Boise State University to convert a two-point conversion and defeat the University of Oklahoma in the 2007 Fiesta Bowl, though it was quarterback Jared Zabransky who assumed the eponymous pose, not running back Ian Johnson, who was the recipient of the back-handed pass. Because the ball was held behind the back and not in the traditional upright throwing position, the play became known as “The Discobolus.” This reference stems from the famous sculpture Discobolus, constructed by the Greek sculptor Myron in 460 B.C, wherein a discus thrower holds his discus in a position similar to Zabransky’s handoff.

Long story short, Wikipedia got all strict on me, and “Discobolus” did not catch on.

3. No. 18 Texas at no. 6 Kansas State (Saturday, 8 p.m.)
Everyone talks about how Notre Dame has been extremely lucky this season, but I would argue that the last couple weeks were fairly unlucky. The ideal situation for the Irish would have been to play Kansas State or Oregon in the national championship, rather than Alabama. KSU’s loss to Baylor proved how vulnerable the Wildcats were, and it’s not hard to imagine Notre Dame executing something similar to the defensive plan Stanford used to beat Oregon. Instead, both schools lost, and now it’s time to get the scowl of death from Nick Saban and languish in the schadenfreude of an Irish-hating nation. (Note: If Georgia somehow beats Alabama, ignore this entire paragraph in favor of this sentence: DESTINY!)

2. No. 13 Florida State vs. Georgia Tech (Saturday, 8 p.m., in Charlotte)
There’s a fair amount of griping about Georgia Tech’s special NCAA waiver that allows them to play in a bowl game even if they lose to FSU and finish with a 6-7 record. I guess the previous rule was that if you finished 6-7, which I’m pretty sure can only happen in this weird scenario where you go .500 and then make a conference championship game, a bowl could not select you over a normal 6-6 team. Now, am I crazy, or is that absolutely stupid? Why would you punish a school for making a conference championship? If Georgia Tech didn’t get the waiver, would they have the option of not playing in the ACC title game so they could remain at 6-6 and play in a bowl? Of course Tech should get a waiver. Why was the 6-7 rule even passed in the first place? The NCAA is maddening, but at least they did the logical thing for once. The main guy complaining seems to be the MAC commissioner, who apparently believes that 6-6 in the MAC should be more esteemed than 6-6 in a real BCS conference.

1. No. 2 Alabama vs. no. 3 Georgia (Saturday, 4 p.m., in Atlanta)
Advice: Skip the game and just listen to the “Imperial March” from Star Wars for four hours. At least then you won’t have to hope. And make no mistake, Saban is here to steal your hope. Last, but not least, here is an anagram for Nicholas Lou Saban: lush banana is cool. Don’t forget it.