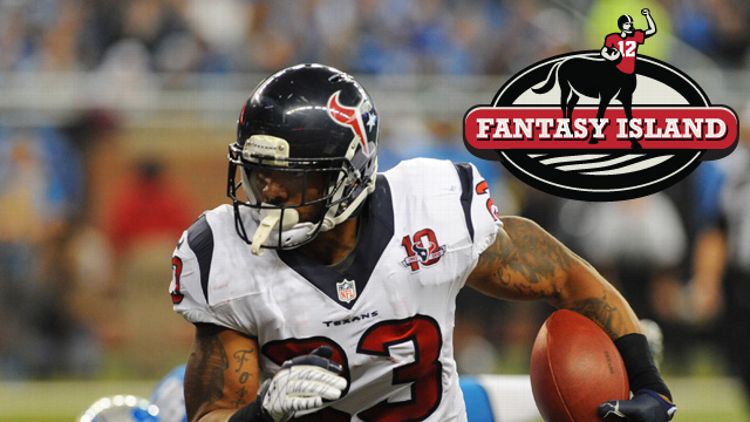 Jaguars at Bills
I’m planting my fantasy playoff dreams on this early kickoff despite the rainy weekend forecast. Too many valuable components in play: Cecil Shorts is an automatic force (291 receiving yards and three touchdowns over the last three weeks); Justin Blackmon is playing like he’s being covered by Big 12 corners again; Steve Johnson has six catches in three straight games; Rashad Jennings faces the 31st-ranked rushing defense in his return to the starting backfield; C.J. Spiller is a top-10 rusher in the league and has gotten there with almost 100 fewer touches than Adrian Peterson (Chan Gailey is finally defining the depth chart with Spiller up top). In short, this is the fantasy game of the week and I can’t wait to be the guy who insists on making others follow its progress at Casa Ramirez on Sunday Ticket.

Matt Forte should play, but is he worth unsheathing? He’s been scoreless for three weeks and hasn’t eclipsed 65 yards during that same span, and now his ankle is a question mark. The slump has been against the upper-echelon run Ds of Houston, San Francisco, and Minnesota, so I think Forte bounces back. Sidney Rice has four touchdowns in four weeks, but Seattle remains 31st in passing yards, and his two-catch performance from Week 7 at San Francisco is about what we should expect from Rice. Chicago is similarly a black hole for opposing running games, but Marshawn Lynch will enjoy 25 cold-weather carries and I want in.

While you may think that Mikel Leshoure is an automatic start here, look again. The Colts D has been stout vs. RBs the past four weeks, and the Lions coaching staff is going to be unsure about giving Leshoure (nailed it!) all the carries. Joique Bell got five of his own last week, and the speedy kid from Wayne State may be on the field even more this week. On the other side of the ball, T.Y. Hilton has rocketed his way to borderline flex-worthiness in the past few weeks, mostly due to his red zone looks from Andy Luck; but in a week that may be a must-win for you, you want someone you can trust, so I am wary to start a guy who was shut out three weeks ago.

When asked what his strategy was for the Packers game, Christian Ponder said “Pray for rain.” When informed that NFL games don’t get rained out, Ponder replied “Oh. Well. I guess then … just pray.” Poor little Christian. Percy Harvin may play but he’ll be on a short leash and eggshells, Kyle Rudolph WILL play but his head is an eggshell. The rest of the Vikings receiving corps has major butterfingers. AP is the key for the Vikings and even he lost two fumbles in Week 12. The main thing that the Vikings have going in their favor is that the Packers looked HORRIBLE last week, too.

For the Packers, it looks like Greg Jennings will definitely hit the field in Week 13. Strangely, he has never dipped below being 85 percent owned this year. People really like Greg Jennings (except James Jones, who I assume will fall off Aaron Rodgers’s radar).

Guys, I’ve got bad news if you are excited for Matt Schaub and Andre Johnson to carry you to the playoffs. The Titans are TERRIBLE against the run. I repeat, TERRIBLE. When the Texans sense a bad matchup against the run, they tend to give the ball to Arian “Australian for Running Backs” Foster — a lot. (See HOU/TEN Week 4: Schaub: 202 Yds, 0 TDs; Johnson: 3 catches, 56 yards.) I’m not saying you should bench Andre Johnson, but don’t go lighting your cigars quite yet. I do think that “The Big O” Owen Daniels will have a good game, but that’s about it. On the other side, you’re starting CJ1/2K, and if you have to start a WR, I like Britt the best.

If you are making the playoffs, and start any players in this game, then I need you to contact me. You need to share these secrets because those of us who banked on the Panthers running game or Tony Moeaki are sucking wind. If the Chiefs had better play from the QB position then this could have been a big game for Dwayne Bowe, but it hasn’t been that sort of year in KC. Cam Newton continues to make big plays in games that hold no importance, and for that reason alone I think he is a great start this week. Cam ends the game with 250 yards, two TDs in the air, and a TD on the ground.
— Ben Liebman

After RG3, Brady, Brees, Rodgers, Peyton, and Matt Ryan, there isn’t a quarterback I feel better about heading into the fantasy playoffs than Colin Kaepernick. San Francisco’s remaining schedule is replete with porous secondaries — even Seattle, who the Niners face in Week 16, will be without starting cornerbacks Brandon Browner and Richard Sherman unless they can pull off a miraculous appeal. At 6-foot-5, 230 pounds, Kaepernick boasts the ideal body for a dual-threat QB, and, because of his mobility, can score you points even when he doesn’t put up prolific passing statistics. I’m bearish on Rams receiver Chris Givens, who’s been a trendy pickup this week. His 17 points last week were largely a byproduct of Danny Amendola’s heel injury, which limited him to a mere seven snaps. Amendola will be fine soon, relegating Givens to fantasy irrelevancy.

During Sunday’s Seahawks-Dolphins game, the sprinklers at Sun Life Stadium unexpectedly came on in the third quarter. After order was restored, the Seahawks sputtered while the home Dolphins scored 17 points down the stretch to seal a 24-21 comeback victory. Coincidence? I think not. This was some chicanery Bill Belichick could appreciate. Belichick’s red-hot Patriots go to Miami this weekend, and I don’t think a functional sprinkler system will be enough to stifle them. (It would be nice, however, if Brandon Lloyd got in on the act this week.) Davone Bess and Brian Hartline are worth a start against New England’s porous secondary.

I already have a playoff spot clinched, so wouldn’t it be fun if I rolled out a lineup like this:

Who scores the most points in that lineup? Will I regret not starting Ryan Lindley? Should LaRod Stephens-Howling get the nod somewhere? Is this a contrived way to say that no one in this game is startable? Or maybe just to rub it in that I’ve clinched a playoff spot?

Doug Martin has turned into Tecmo Bo Jackson. In his worst game since exploding onto the fantasy scene, he still had 63 total yards and two TDs, even though Atlanta admitted stacking the box against him. It still just barely worked out and wouldn’t have if Josh Freeman had avoided a couple of big mistakes.

Meanwhile, the Broncos looked surprisingly ordinary versus the decidedly terrible Chiefs. The big story was that Knowshon Moreno emerged from the three-man McGahee Replacement Committee and was a straight every-down back, carrying the ball 20 times for 85 yards and adding four catches to give him more than 100 yards of total offense. It’s probably prudent to hang on to Ronnie Hillman for another week, because who knows if Moreno’s got back-to-back good games in him. If he doesn’t, Hillman’s got next.

Losers of four straight and with an offense that was completely corralled at home by Cincinnati, there are two trustworthy Raiders going forward: Marcel Reece, the check-down reception magnet, and Brandon Myers, the crusty tight end who leads the team in catches and seems like the kind of Heartland bro who would ride with you to a kegger in the bed of a pickup. The Silver-and-Black is 28th against the run, and Trent Richardson, the Human Bowling Ball, is licking chops — hope he isn’t an impediment to a berth in your league’s playoffs. Rookie quarterbacks traveling west tend to stumble, but these two teams are on opposite ends of the emotional spectrum, and I think a jacked Brandon Weeden, fresh off upsetting Pittsburgh, throws big against the league’s 24th-ranked secondary.

Here are some thoughts that would not have made sense a year ago:

1. Andy Dalton should be starting for your team; Philip Rivers should not be on your roster.
2. I would not trade A.J. Green for every skill position player on the Chargers.
3. Ryan Mathews is not as trustworthy as BenJarvus Green-Ellis.
4. I’d still start Antonio Gates over Jermaine Gresham, but I thought about it for a long time.
5. Norv Turner deserves to be fired more than Marvin Lewis.

This has been a weird season.

This game will be a totally different fantasy situation depending on whether Ben Roethlisberger is back (and it’s not looking good). Charlie Batch’s passes were gratuitously uncatchable in Week 12, and his incompetence was contagious. All of the Steelers running backs fumbled (Rashard Mendenhall fumbled twice on four carries) except Chris Rainey. Chris Rainey? Exactly. If Batch is back under center next week, no one wins except maybe the Baltimore defense.

Oh, Eagles. Which was worse, your defense or your non–Bryce Brown offense? I can’t decide. It’s too depressing to research. Nick Foles is looking like he’ll suit up again in Week 13 and he is just not ready. His reads are late and his judgment is suspect. Bryce Brown is truly a revelation and I assume the Eagles will ride him again this week. He’s the only Eagle who should be on your radar at all. The Eagles are just a fire sale waiting to happen.

Consequently, Tony Romo has a very favorable matchup this week. He actually looked quite good in full-bore comeback mode in the second half of the Redskins game, which he ended with a monster stat line — 62 attempts, 37 completions, 441 yards, three TDs, two INTs. Dez Bryant caught eight passes for 145 yards and two TDs, but he also fumbled at a crucial juncture, leading to a Redskins score. Jason Witten got a team-high 15 targets and caught nine. He’s caught at least six passes in nine straight games. With Miles Austin injured (hip, hamstring), count on these two to continue to be red hot against Philly.

Osi Umenyiora, elder statesman of the Giants defense, entered 2012 an RG3 skeptic. While most players, coaches, replacement refs, degenerate gamblers, and groupies around the league rushed to anoint Griffin royalty, Umenyiora demanded cold, hard results and refused to call the Redskins quarterback anything but “Bob.” About halfway into the season, Osi became a convert — a born-again Griffin — and even knighted the NFC East foe (that’s Sir Robert Griffin to you). To me, Osi’s change of tune seemed like a ploy, designed to coax RG3 into taking it easy on the Giants whenever Mr. Umenyiora goes to Washington. It won’t work. Despite dazzling fourth-quarter heroics, Sir Robert Griffin lost to the Giants a month ago and will be out for blood. Also, start Pierre Garcon, who last week fit back into the Redskins offense like a missing puzzle piece after losing substantial time to a foot injury.