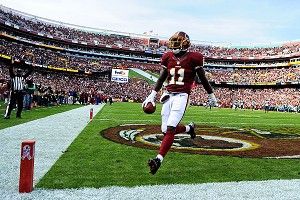 Quick question: Is it safe to hide jermajesties* in the crisper or will they eventually go bad? I have a serious problem trying to hide the many bundles I’ve accumulated from the wife and kids. Thanks to my Week 12 prop bet conquest, I’ve now amassed 217,500 jermajesties on the year.

Basically, if the Dolphins’ defense were on the field for punt returns, I would’ve swept the board.

Jets (-?) in the second half vs. the Cardinals

This is a weird one because the second-half line isn’t made public until halftime. So, in essence, this would be like playing no-limit hold ’em and going all-in without looking at your cards. Well — take a good look at these Cards. In the second halves of their last two games, they’ve put up 3 and 0 — as in points. Quarterback Ryan Lindley has been less Captain Comeback and more Captain Laid-Back. The Jets could replace Darrelle Revis with Fireman Ed and still win this one handily. 15,000 jermajesties

Patriots to score over 30 points vs. the Dolphins

Forty-five, 37, 59, and 49. Those are the Pats’ point totals in their last four games. They’re on a serious mission to amass 600 total points for the season. Last year, Tom Brady threw for 517 yards in Miami. Also, you must consider the possibility that New England coach Bill Belichick is in a weird mood and decides to run up the score. Sounds insane, but it totally could happen. 15,000 jermajesties

Don’t get me wrong — I’d rather watch Liz & Dick on a 24-hour loop while Halle Berry’s boyfriend pounds my face into the pavement (yay, pop culture!) than have to view the Jacksonville-Buffalo game in its entirety. But there’s something about this play that intrigues me. The Jags have become sneaky good on offense in the Chad Henne era, plus the Bills yielded 35-plus points in five of their first 11 games. Not to mention we’re jermajesty-rich, remember? Let’s take a shot. 1,000 jermajesties

Dez Bryant has put up back-to-back 145-yard receiving games. This week, he’s up against a Philly defense that has pretty much quit on its lame-duck coach. If you don’t believe me, watch tape of last week’s game when the Eagles covered the Carolina wideouts as if they were riddled with diphtheria covered in poison oak and repeatedly dipped in SARS. 2,000 jermajesties

Over the last two weeks, this speedster has torched defenses for 49- and 68-yard touchdown receptions. Luckily for Aldrick, the only player quick enough to cover him is the guy throwing him the football. 3,000 jermajesties

The Falcons snapped Brees’s streak of 54 consecutive games with a touchdown pass Thursday night. The good news for the Saints quarterback is that if he can throw five interceptions again the next two weeks, he will have a brand-new record!

The Lions’ controversial defensive tackle, a defendant in multiple lawsuits and two-time winner of the Sporting News dirtiest-player poll, was fined $30,000 for kicking Texans quarterback Matt Schaub in the groin on Thanksgiving. If the 10-year-old me were given 30 grand every time I was kicked in the nuts, I would own a dozen Chuck E. Cheese’s. I would also owe about three dozen Chuck E. Cheese’s.

7/1: Odds the Panthers win the coin toss this week vs. the Chiefs

Seems crazy, but Carolina is now 0-12 on coin tosses this year. I think it’s fair to say coach Ron “Mush” Rivera isn’t holding one of the winning Powerball tickets.

I hope this one comes in if for no other reason than that I can be the first to observe that these two teams have more ties than Christian Grey. You can now stop pretending that you’re not a huge 50 Shades of Grey fan.

Starbucks wins a close one — $21 to $20. At seven bucks a pop, this cup of joe is sure to keep you awake. Unless, that is, you’re drinking it while attending this Sunday’s Jets-Cardinals game.

5/2: Odds that Brandon Marshall’s next touchdown dance involves teammates doing the limbo under his erection

When asked about the rash of Adderall-related suspensions in the league this season, the Bears wide receiver said he’d heard of all kinds of methods players have used to get an edge, including the use of Viagra. Not sure if it works, but it will for sure lead to a rash of restraining orders filed by NFL cheerleaders.

Earlier this week on Jimmy Kimmel Live, Iron Mike told a hilarious story about the time Mrs. Brady visited him in prison. Which got me thinking — how much better would The Brady Bunch have been with Mike Tyson as the father? Instead of a dog named Tiger, the family would have a Tiger named Dog. His architectural designs would be tattooed on his face. Peter would be missing an ear for breaking Carol’s favorite vase. I don’t think it’s too late. The Brady Punch! I’m pitching this spin-off ASAP.

3/1: Odds I get arrested for loitering in Dealey Plaza this weekend hoping for a glimpse of Jason Garrett in a convertible

Yes — I’m making the annual trip to Dallas, where I’ve NEVER seen my team win a game. We’re playing a backup quarterback who is handing off to a backup running back and throwing to a backup wide receiver. AND the Eagles cut their no. 1 pass rusher this week. What could possibly go wrong? I think you degenerate gamblers know how to play this.