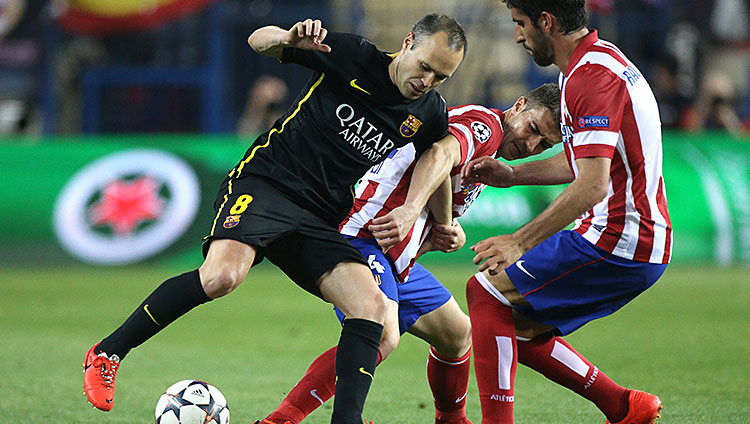 Atletico Madrid’s triumph over Barcelona (2-1, on aggregate) might seem like a Champions League Cinderella story. But is it really a Cinderella story when a team does exactly what it was designed to do? What Diego Simeone’s side accomplished against the Catalan giants was hardly the stuff of scrappy underdogs; this was about the imposition of a defense perfectly constructed to neutralize Barcelona’s possession-based attack. And that’s what Atletico did.

An opposing team can get chances against Atletico, but not the best kind of chances. This is about through balls. As Michael Caley showed late last year at Cartilage Free Captain, through balls create the most valuable type of chance, leading to shots two to three times as likely to wind up in the back of the net compared with other shots taken from the same position. Guess who leads La Liga in through balls per game? Barcelona, with five. And while they managed four on Wednesday, none led to goals, and none came vertically through the teeth of Atletico’s defense.

Simeone has implemented a system against which chances off through balls just don’t happen. Atletico play a compact, narrow midfield, with pressure applied on the ball from their wide players. This forces opponents to advance the ball into wide areas. When the ball is then funneled back into central positions, the midfield, led by defensive stalwart Gabi, and the central defense stay close together and work to shut down space and clear the ball. Then the forwards and wide players move aggressively to recover possession.

And when Atletico get the ball … look out. Their attack is lightning quick, and they have a full complement of potent finishers. (For a comprehensive breakdown of how the system works, shown in phases with pretty pictures, check out this analysis by Jamie Adams.)

A team that doesn’t concede through balls and whose forwards press the midfield intelligently for 90 minutes? You have a squad designed to neutralize Barcelona. And while the results between the two teams have not been particularly lopsided this season (four draws across all competitions before Atletico’s 1-0 win Wednesday), Atletico have held Barca to only two goals in those five matches.

So the question going forward is whether Atletico’s system will be effective against the remaining teams in the competition. Looking at tournament favorite Bayern Munich, there are a lot of similarities between Pep Guardiola’s current team and his former squad. Munich does have the ability to roll out Mario Mandzukic as a traditional nine and route their attack through their wingers (Arjen Robben and Franck Ribery). However, if Bayern are stubborn and try to play through their array of creative central midfielders, they’ll be unlikely to break down Atletico’s defenses.

Chelsea present a different challenge, as Jose Mourinho’s system is similar to Simeone’s, resulting in a tactical matchup akin to a hockey shootout. Whoever moves first (or applying the metaphor, whoever decides to hold more of the ball) is at a disadvantage.

The most tantalizing potential matchup left for Atletico is a contest with their local rival, Real Madrid. Real has the wingers needed to hurt Atletico on the counter, as was evidenced by their 5-0, two-legged Copa del Rey triumph. That said, the two league matches between the clubs have ended in a win and a draw for the Rojiblancos. It’s a matchup in which each team’s strength plays at another team’s weakness, leading to tactical unpredictability with the passion of a derby.

Regardless of who Atletico take on in the next round, though, they remain a distinct threat to win the most prestigious trophy in club soccer primarily because of their disciplined and effective defense. This isn’t Cinderella. This is just a different type of Goliath.

Drake and Johnny, and a Plea for More Sports-Themed Rap Songs