Drake and Johnny, and a Plea for More Sports-Themed Rap Songs 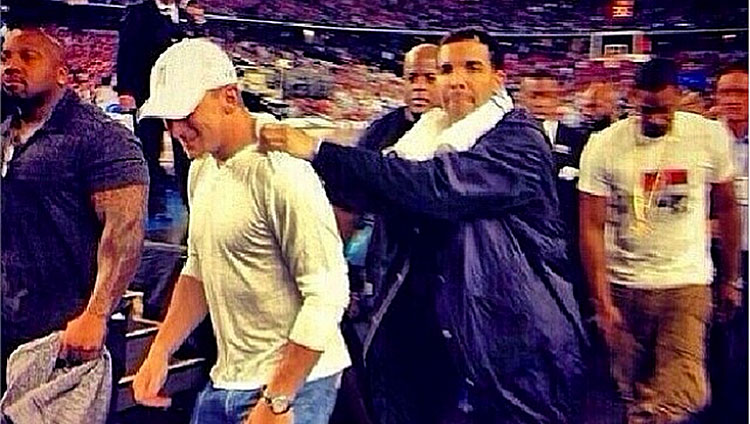 Eight days ago, Drake posted the song “Draft Day,” no shouts to Kevin Costner, on the OVO SoundCloud page, featuring the couplet “Draft day / Johnny Manziel.” Four days ago, Johnny Manziel Instagrammed a photo of Drake trailing J. Football, hands on his shoulders like the proudest of proud dads, at the Final Four. Statues of the Greek sports god Hermes are suddenly wearing Beats headphones and crying blood, but, like, happily crying blood. It’s EFFORT BLOOD.

As if this weren’t enough, on Tuesday, Future and Kanye West dropped “I Won,” which uses sports and the sweet mouthfeel of victory to redefine the phrase “trophy wife.” As the world’s perpetually saltiest winner — every Kanye song is basically Michael Jordan’s Hall of Fame speech — West manages to fit in a little barb about how he beat NFL and NBA players in the Game 7 for Kim Kardashian’s heart. But overall, the song is celebratory like only a Future song can be: It’s a hymn for champions; it’s a sonic Wheaties box. And it wouldn’t be controversial to say that neither of these songs — Drake bookending a 700-word verse about eating raw oysters with shout-outs to Manziel and Andrew Wiggins; Future and Kanye cutting down the nets in tribute to their significant others — would be possible without sports. Pure, unadulterated sports.

Hip-hop and sports have a long, complicated history, but let’s focus on the present. Before last week, the present mostly consisted of metaphors, throwaway lines that, at their best, could turn a good song into a great one, or a nonstarter into something newsworthy; think Jay Z ethering Scott Boras on “Crown,” a track so otherwise generic it could play one of the Unsullied. Then there’s Action Bronson, who has woven sports into his raps’ DNA, Gattaca-style. He is a man who calls himself “the young Randy Velarde,” after a utility infielder with a .276/.352/.408 slash line who was fingered in the Mitchell Report.

Before this week, Bronson was the best we had. But we’re stepping to the next plateau. “Draft Day” and “I Won” and the collected oeuvre of the Young Zinedine Zidane/Rap Game Phil Mickelson’s Psoriatic Arthritis are a good start, but we can’t stop there. We need more sports-themed rap songs. We need entire mixtapes inspired by the Wizards-Raptors triple-OT game in February. We need Kendrick Lamar turning his parallel-universe relationship with Arron Afflalo into a concept album that wins the Nobel Peace Prize.

Sports and rap are the two main cultural hubs of masterful braggadocio and egotistic silliness and stark, arbitrary duality; the only virtuoso takedown artists who exist outside of these two realms are the characters on Veep. Look, guys: The Masters are this weekend. You know how many things rhyme with Jordan Spieth?