You Are Not Real to Kevin Garnett, Therefore You Don’t Exist 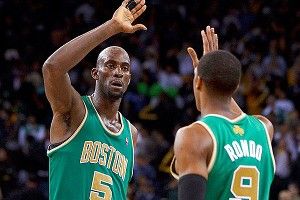 On Monday night, the Celtics beat the Hawks in an offensive fireworks display that will no doubt be memorialized in song. A song like this one.

Despite losing the game, the big play of the night came courtesy of the Hawks, when Teague stole Ray Allen’s identity, went on a shopping spree, and then sent pictures of him enjoying all his new Sharper Image gadgets to Ray Allen’s house. He did so via this dunk:

I haven’t seen Atlanta that excited since “Trap or Die” dropped. After the game, Kevin Garnett was asked about Teague’s dunk. He responded: “I don’t know who you are talking about. That guy’s a nobody.”

There are few things in life more amusing than when KG declares somebody a nobody. Teague joins the illustrious company of Charlie Villanueva (“It’s a nobody. I’m not paying attention to nobodies”) and Joakim Noah (“I’m not entertaining nor addressing nobodies”).

Nor! Yeah, so, if I were Jeff Teague — not that he needs my affirmation of his existence — I wouldn’t take it too hard. He’s in good company. As for Kevin Garnett (a.k.a. Taking it too far since 1995), keep insisting people do not exist because they have the temerity to dunk on your teammates. After all, there are two kinds of people in the world. At least half of them find it all hilarious.