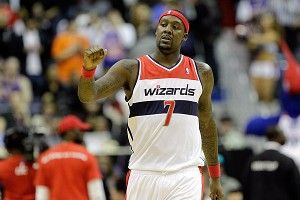 Tuesday, just a few days after sending JaVale McGee to Denver, the Washington Wizards announced they were shutting down Andray Blatche for the foreseeable future (likely the rest of the season). This news closes the curtain on the NBA’s most devastating duo, Blatche and McGee. (Sure, their partnership was separated by distance, but they were still linked, both psychically and in their rules-and-physics-averse style of play.)

Depending on how you look at it, the Blatche shutdown is either sad or hilarious. Wizards coach Randy Wittman said Blatche’s back-from-injury conditioning was the reason. “We’re going to probably not play him for a while, get him on a program here, where he can really go after it from a conditioning standpoint to get himself back into shape,” he said.

We’ll leave it at that. Frankly, I’m more upset at David Stern for allowing all this to happen than I was about the Chris Paul business. R.I.P., Blatche and McGee. Gone but not 4gotten.

You Are Not Real to Kevin Garnett, Therefore You Don't Exist