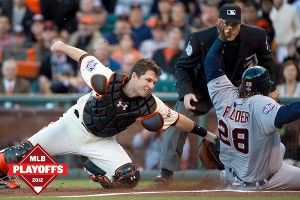 We hear it time and time again in baseball. A team’s struggling, looking for a spark. To snap out of that funk, someone needs to make something happen. A bunt, a steal, a bit of baserunning derring-do. Anything to get the ball club going.

The Tigers got blown out in Game 1 of the World Series, with Barry Zito and Tim Lincecum neutering the big bats. So when Delmon Young doubled into the left-field corner with Prince Fielder on first and nobody out in the second inning of Game 2, third-base coach Gene Lamont sized up the situation, then sent the big man careering toward home. Gregor Blanco fired the ball to Marco Scutaro, who heaved a perfect relay throw to Buster Posey, who applied a terrific sweep tag on Fielder’s foot, nailing him a split-second before he touched the plate. Madison Bumgarner wiggled out of the inning from there, and the Tigers never got that close again, pushing just one other runner as far as second base.

After the game, Lamont admitted he’d been “overly aggressive” in sending Fielder, a straight case of using his heart, or gut, or balls, any body part other than his head. Hell, he’d had the good sense to be more conservative during the regular season, sending the bruising Fielder home from first just three out of 11 times on doubles (the average player scores from first about half the time, per ESPN Stats & Information). Though no one on the field could have cited the exact figure on the spot (per Baseball Prospectus, major league teams scored an average of 1.89 runs during innings in which they had runners on second and third with no outs), Lamont had to know that windmilling his guy in was bucking the odds. It wasn’t like stiffs were coming up either: On deck was Jhonny Peralta, an above-average hitter who, if you care about such things, was 8-for-22 with three homers and doubles in the ALCS and Game 1 of the World Series. Try to forget the outcome for a second; even if Fielder scores, would it have been worth the risk? The same run expectancy chart shows that with a runner on second and one out, teams scored an average of 0.65 runs.

You have to prepare for eventualities ahead of time. Should a situation arise in which you’re sending Fielder in for a potentially close play at the plate, you’re tacitly saying you can’t score a runner from third with nobody out. You’re also placing a great deal of emphasis on one run in the second inning of a game, when you have a legitimate chance at a big inning if you hold the runner at third.

The temptation to do something aggressive and try to force the action when your team’s in trouble can be overwhelming. But if you have respect for data and probabilities at all, why abandon them at the exact moment when the stakes are highest? When it comes to coaching and managing a game, give me a shrewd eunuch over an impulsive baller any day.

LAMONT WASN’T THE ONLY ONE WHO MESSED UP

A.J. Pierzynski has a future in broadcasting. Weighing in on the play at the plate, Pierzynski correctly noted that Posey has been adamant about not blocking home on close plays after Scott Cousins blew him up last season, wrecking the All-Star catcher’s ankle (Posey wasn’t impeding Cousins’s path on the play, either; the Marlins outfielder initiated the contact by hurling himself into the Giants catcher). Just as Lamont has to understand the situation before seeing a 280-pound man sprinting toward him, Fielder has to be aware of Posey’s proclivities and know that a slide to the outside of the base makes more sense than coming straight in, which made it easier to apply a successful sweep tag.

Bonus points to Peralta for offering little to no help as his teammate steamed for home.

ONCE AGAIN, A LEFTY SHUT DOWN THE TIGERS OFFENSE

Make it three days in a row that we’ve noted the Tigers’ struggles against left-handed pitching this year, then credit Bruce Bochy for going back to Madison Bumgarner after horrific starts in the NLDS and NLCS and an ugly finish to the regular season. Bumgarner became just the third pitcher since 1950 to throw seven-plus innings, allow two hits or fewer, and strike out eight, joining Tom Glavine and Roger Clemens in that exclusive group. A cynic might say that Bumgarner had help, given that 22.4 percent of plate appearances with Dan Iassogna behind the dish this season ended in a strikeout — the highest strikeout rate for any ump in 2012. But Iassogna’s strike zone wasn’t excessively generous; he also made an excellent call on the Posey-Fielder tag, and his colleagues nailed multiple close plays too.

Instead it was Bumgarner befuddling Tigers hitters for much of the night. He battled Austin Jackson to lead off the game before finally freezing him on a fastball right on the inside black for strike three on the eighth pitch of the at-bat. He threw a wicked down-and-in slider to Omar Infante to make it back-to-back strikeouts. His fastball topped out in the low-90s. But like Barry Zito the night before, Bumgarner’s ability to mix pitches and locations messed with hitters’ swing planes and timing, and made his fastball look a lot faster. When Bumgarner struck out Jackson for the second time to end the third, it was on a 91-mph heater that made the Tigers’ leadoff hitter swing late. Strikeout no. 6 was on a curveball in the dirt to notorious hacker Delmon Young. No. 7 was a fastball high and off the outside edge that Gerald Laird had no chance to hit, even at just 89 mph. All told, Bumgarner reached two strikes on 10 hitters, and struck out eight of them. It was a virtuoso performance, made more so by …

The Tigers went just 2-for-17 on balls in play in Game 2. You couldn’t really pin that on spectacular Giants defense, either, as we didn’t have any Gregor Blanco trapeze acts this time. Detroit hitters actually scalded the ball multiple times, only to run into misfortune again and again. After Omar Infante reached on a lead-off single in the fourth, Miguel Cabrera pummeled a Bumgarner pitch only to see it fly right into Pablo Sandoval’s glove at third. Then Bumgarner got another pitch up, Prince Fielder cranked it to left-center, but Blanco made the play on the warning track. With a runner on first in the sixth, Infante ripped a liner down the left-field line … but the ball landed a couple feet foul.

Meanwhile, the Giants caught a couple of breaks, none bigger than a Blanco bunt in the seventh that went to such extraordinary lengths to stay fair, you’d have thought the Norwegian curling team was sweeping like mad to keep the ball in play. This happened a night after Angel Pagan hit a slow roller that somehow hit the third-base bag for a key double.

Branch Rickey famously said that luck is the residue of design. There’s some truth to that axiom, starting with Bochy having the good sense to avoid having Brandon Belt (zero career sacrifices in 681 regular-season plate appearances) bunt with a runner on first and nobody out, then having Blanco, a better and more experienced bunter, lay one down with runners on first and second and nobody out. But the Giants can’t necessarily count on luck going their way for the rest of the series. One thing they might be able to bank on, though, is …

For Bochy, Zito and Bumgarner starting the first two games of the series has worked great. So has shifting Tim Lincecum to long relief. The seventh-inning chain of bunting events paid off. He’s used his bullpen intelligently, pulled his starters at the right time, and generally placed his players in the best spot to succeed.

Leyland’s moves have proven less prosperous, and moreover have been rooted in shakier thought processes. You could understand Leyland bringing in Drew Smyly in the seventh to face three straight lefty hitters (a lineup decision that’s been one of Bochy’s rare missteps). But why bring Smyly back out for the eighth, when he’d shown shaky command in his first inning, the Tigers had a reasonably fresh bullpen, and the Giants had two switch-hitters and a right-handed hitter due up? When Pagan walked and stole second around a Scutaro strikeout to open the eighth, Leyland intentionally walked Sandoval, even though Kung Fu Panda owns a career OPS more than 100 points lower vs. lefties and hit his three homers off a righty in Game 1, while on-deck hitter Buster Posey was the second-best hitter in the league this year; Octavio Dotel might’ve offered a decent platoon matchup, but there was still no math that would’ve led you to conclude that a free pass made the most sense there. Less noticeable moves like leaving Laird in to swing meekly against righty killer Santiago Casilla in the eighth were no better by process, even if they made less difference by results.

That’s been the thing about Leyland in the first two games. The moves that might seem most objectionable on the surface, such as playing the infield back with the bases loaded and nobody out in the seventh, can at least be argued either way (try to cut off the run at all costs, vs. get out of that inning with only one run allowed, and you’ve still got a fighting chance to come back). But on the little things, the Tigers skipper has whiffed more than once, while his counterpart has hit the right notes.

THE GOOD NEWS FOR THE TIGERS IS …

THEY’LL HAVE BETTER DEFENSE OUT THERE, TOO

The execrable Delmon Young shifts to DH, clearing the way for Andy Dirks to play left.

BOTH TEAMS WILL HAVE HOT STARTERS GOING

Anibal Sanchez has allowed just two runs combined in his two starts this postseason. He also closed the regular season on a tear, striking out 44, walking 13, and allowing just three homers over 54⅓ innings, holding opponents to a meager .227/.255/.310 line over that stretch. Meanwhile, Vogelsong has posted a 1.42 ERA, struck out 18, walked six, and allowed no homers in his three playoff starts this year; he would have been NLCS MVP if not for Marco Scutaro’s BABIP fiesta. He, too, fared well at season’s end, allowing just a single earned run over his final three regular-season starts.

Sanchez is one of baseball’s most underrated starters and gives the Tigers a good shot to win. But if he falters early, Leyland will have a supremely rested bullpen and no set closer, which should theoretically free him up to master matchups the way Bochy has throughout the playoffs. It’s conceivable that Cabrera and Fielder finally break out and Detroit simply bludgeons its way back into the series. But the Tigers need to stop ceding all the little advantages to the Giants, or this could all end in a hurry.