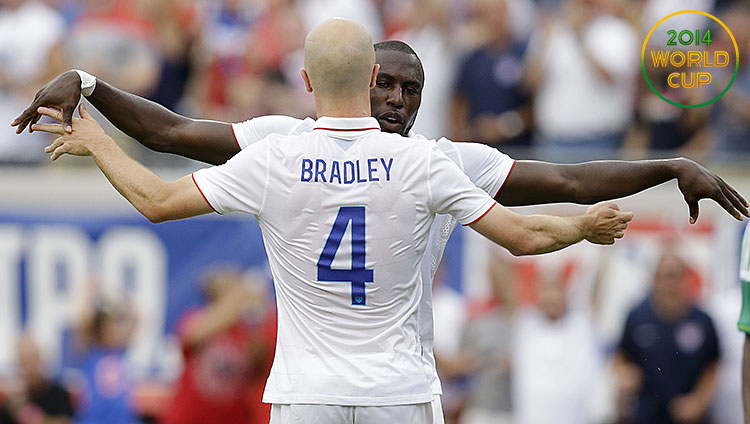 There’s this sequence in Alan Moore’s Watchmen in which the future Dr. Manhattan (bear with me — this could seem tenuous), Jon Osterman, is learning to reassemble himself at a molecular level after being fission-fried in a lab accident. Gradually he hones his technique, though not before a series of flawed manifestations that terrify everyone who encounters them — an incomplete nervous system appears in a staff canteen, a mysterious light appears near a perimeter fence. Finally, the cool, blue superhuman gets it right.

Now, I’m not claiming Jurgen Klinsmann has manifested himself as a comic-book Übermensch (though come to think of it, he does look like Ozymandias), but at times I’ve thought about this Watchmen sequence while witnessing Klinsmann’s attempts at reshaping the United States men’s national team — as one part or another of his manifesto for the side (say, building a team that defended as a compact unit and broke with speed) appeared in palimpsests.

What seemed unclear was when it would all cohere, or whether we’d be watching a half-reanimated Frankenstein’s monster of MLS, Mexican League, Bundesliga, and Premier League parts lurching into Brazil, with Klinsmann still tinkering from game to game, full of esoteric visions of a mysterious substance called “2018.”

But on Saturday, in the humidity of Jacksonville, for much of the game it was possible to see elements of all of Klinsmann’s experiments (remember the conversations about numbers of defensive midfielders? Or about balancing the attacking instincts of the full-backs? Or about the luster of diamonds? Or, yes, where Landon Donovan fits?) and also something like an arcing vision coming together before the World Cup.

Yes, the popular story line from the game will largely concern Jozy Altidore learning to score again. For that, Klinsmann can thank his lucky stars. In fairness, the coach himself would be the first to concede that for all the preparation in the world, you need a little bit of luck. It’s one of the lessons a close reading of his 2006 adventures with the German team teaches us. Sure, he and then–assistant manager Joachim Low were lauded for restructuring the Germany football DNA, but they still needed the odd break in their run to the semis that year.

And you know what? Luck breeds belief. And instilling belief is perhaps what Klinsmann is best at.

The emphatic nature of Altidore’s second goal gave the lie to the striker’s bluff assertion last week that his confidence was “fine, my man.” Put it this way: Do you see Altidore cutting back and slamming that second goal in if he hadn’t been given the simplest of unmissable finishes in the first half to break his 28-game goalless run? Maybe. Likely not.

This game was just a chapter of a larger, more important story. The USMNT finally, finally looks to be balanced. The prototype of the midfield diamond had been exposed against Turkey as horribly brittle. The visitors at Red Bull Arena adjusted and raked cross-field balls that found U.S. players tucking in, dropping back, pushing up, or closing their eyes and sticking a pin in the place on the field they thought they ought to be. That game was Dr. Manhattan laid up in traction — OK, facing forward but unable to adjust left or right.

At first, the Nigeria game looked like another experiment. When the team sheet arrived in the press box, you could almost hear the furrowed brows above the hum of the air conditioning as people began sketching out a team with Kyle Beckerman, Michael Bradley, and Jermaine Jones at the heart of it. Even as it became clear that Bradley would be pushed up at the center of a 4-2-3-1, with the kind of advanced role he has taken on in the past few years, it still looked like the sort of conservative lineup that Klinsmann has occasionally favored against big teams. The USMNT will be facing a lot of those big teams starting this week. So much for adventure.

When the game kicked off, it also looked like more of the same. The skeleton of the side had thankfully developed some necessary interlocking flexibility since the last game, but the musculature was still twitchy.

Off the ball, players were circulating into positions in the Jacksonville heat — supporting each other, grabbing moments of respite, managing their energy, and for the most part not letting Nigeria’s attempts to tempt them out of shape seduce them. With the ball, though … well, they didn’t have the ball for long at first. Pass after pass, from the simple to the ambitious, was misdirected in the opening moments. It wasn’t until midway through the first half that things began to cohere.

That’s when something began to click. From that point in the game onward, it was possible to see what Klinsmann wants from his team in Brazil. It conceded possession, stayed disciplined (at least until the substitutions began to fray them), absorbed Nigerian pressure, and sprang forward smartly.

Of the latter tendency, it was perfectly illustrated in Altidore’s second goal. It was a piece of play that gave credence to the idea that this was a USA team coming together at the right time. At times — watching Bradley, Jones, Clint Dempsey, and Fabian Johnson interact — it looked (whisper it) … organic.

If the U.S. is not there yet, it’s getting there. “Joining the dots,” as Klinsmann put it to me a month or so ago. He was speaking of the broader technical development side of his job, but he could have been talking about the art of getting the senior team to cohere, and to learn and believe in its powers, collectively and individually, at just the right time.

No wonder he spoke so dismissively about the significance of tactics on Friday — that phase of the rebuilding and experimenting is largely over. It’s now about the players animating the roles they’re given. They might not yet be ready to save the Earth, but they’re nearly ready to compete against its teams.

The Weekend of Manny Machado's Discontent