The Weekend of Manny Machado’s Discontent 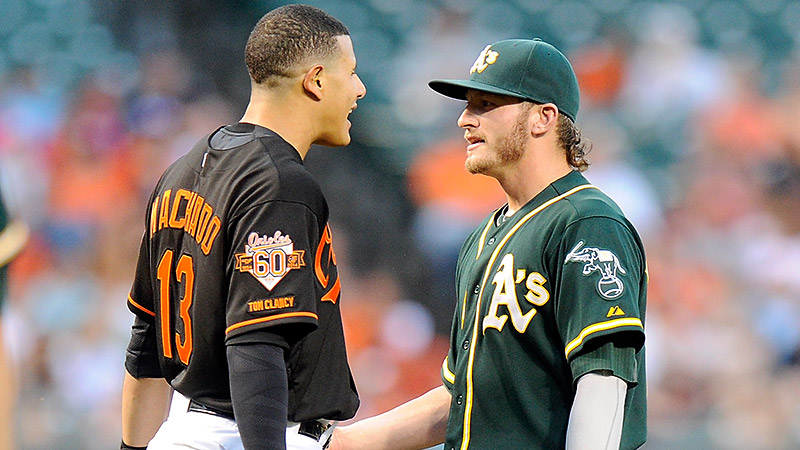 I’m far too publicly in the tank for Manny Machado to walk back my praise for him. Over the past two years I’ve gushed about his defense and intelligence, called him one of the coolest players in the game, and generally not shut up about how much better baseball is with him on the field.

So imagine my puzzlement when, this past weekend, Machado seemed to suddenly and shockingly lose his mind.

On Friday night, Machado was going from second to third when A’s third baseman Josh Donaldson planted what was supposedly a particularly enthusiastic tag on Machado, who fell, threw his helmet to the ground, and bounced up to confront Donaldson as the benches cleared. For a moment, it looked like a simple tag play could end the same way Zinedine Zidane’s career did, but Machado and Donaldson were quickly separated.

On Saturday, Machado accidentally hit Oakland catcher Derek Norris in the head with a backswing, an incident that might have gone unnoticed if not for the events that bookended it. Oakland players reportedly took umbrage with Machado’s failure to apologize, but the larger baseball world went about its business, unaware that things were about to become even weirder.

Sunday afternoon, Oakland reliever Fernando Abad faced Machado with two outs in the eighth inning of a then 10-0 game, and started the encounter by running a knee-high fastball way inside on Machado.

Abad’s a lefty with a three-quarters arm slot and Machado’s a big right-handed hitter who stands fairly close to the plate. The ball came close to hitting Machado, but not that close. Machado stepped out and stared Abad down, perhaps in irritation that he’d almost been hit. That’d be understandable, even if throwing at someone’s knees — if that’s even what Abad was doing — isn’t as bad as throwing at someone’s head, and even if dozens of hitters manage to avoid being hit with baseballs every day without trying to start a ruckus.

The next pitch was low and inside again, and, according to home plate umpire Larry Vanover, intentionally aimed at Machado’s knees. But instead of dodging it, Machado tossed his bat somewhere over his shoulder. It wound up looping over Alberto Callaspo, who’d replaced Donaldson at third base, and landing in short left field. Machado said after the game that the bat slipped out of his hands, but I don’t believe him even a little.

Here’s what it looked like to me: Machado, for whatever reason, decided to throw his bat at someone, either Abad or Callaspo or the Oakland dugout. It was shocking, immature, stupid, and, above all, dangerous. Major League Baseball will almost certainly suspend Machado, and he’ll deserve every game he gets.

I’m shocked because even though baseball players use their idiotic unwritten code to normalize responding to hurt feelings with violence, nobody throws bats at other people in the usual run of play. I’m shocked that Machado, by swinging within some vague proximity of the pitch and then pointing to his hands, thought he could make it look like an accident. But I’m also shocked that Machado of all people started two benches-clearing brawls in three days by committing escalating acts of immature assholitude.

Oakland catcher John Jaso was in the lineup at DH on Sunday, and he was one of the first players to enter the fray. Jaso hardly has a reputation as a crusader for on-field vigilante justice; Susan Slusser, the A’s beat writer for the San Francisco Chronicle, knows Jaso’s personality way better than I do, and she called him “usually the team’s most-laid-back player” right before quoting him saying something we’d expect to hear from Miguel Montero’s mouth:

“It got pretty intense there for a while, I don’t know,” Jaso said. “There is a certain respect you have to have for this game … and when I feel someone doesn’t see that or respect the game as such, it doesn’t sit well with me. I really don’t like it. And that’s what I felt: I felt there was disrespect for the game coming from one player.”

Between the melee after the tag on Friday, Machado’s insufficient contrition for hitting Norris on Saturday, and the bat toss on Sunday, Machado had a weekend in which violence begat violence. And perhaps the most shocking thing is that it’s not clear why he did it.

Maybe he was frustrated that, after finishing ninth in MVP voting in 2013, he’s suffered through injuries and his OPS is down below .650. Maybe he’s frustrated that his team was 5.5 games out of first place and down 10 runs, and was trying to do something to fire them up. Maybe, after hanging out with Alex Rodriguez this winter, he’s been conditioned to throw his bat every time he sees the queen of diamonds, and Adam Jones is going around telling reporters that “Manny Machado is the kindest, bravest, warmest, most wonderful human being I’ve ever known in my life.”

Whatever the reason, Machado needs to sit. Youth is no excuse: We learn not to throw things at people when we’re mad before we learn to read and write. What Machado did on Friday was stupid and dickish. What he did on Sunday escapes the bounds of what we’re prepared to see on a baseball field. No matter who he is or how much we liked him before, Machado has earned a severe punishment.