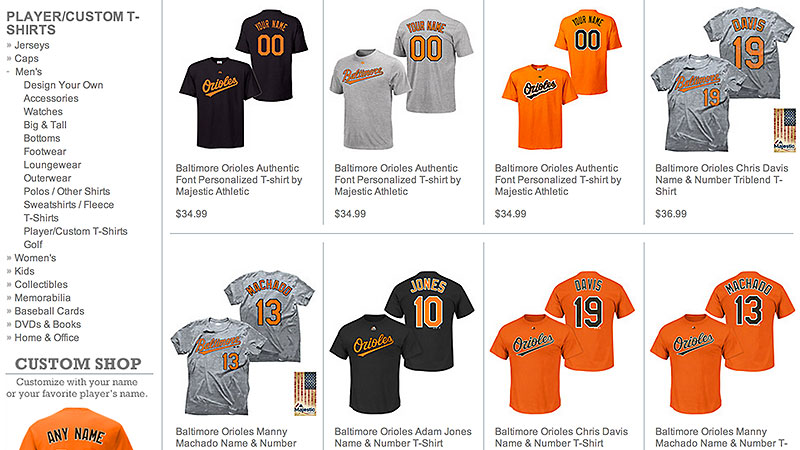 The shirsey is the best piece of fan gear in sports, and I’ll brook no argument to the contrary. An actual baseball jersey is not only expensive, but different enough from an everyday shirt that wearing one outside a stadium makes a particular statement, namely: I’m Not Cool. The same goes for football jerseys. NHL jerseys look great, but they’re bulky. NBA jerseys expose armpit hair. Only soccer jerseys look as cool on the street as shirseys, but they’re several times the price.

No, as a tool for supporting not only a particular team but a particular player, the shirsey is unparalleled in wearability, affordability, and utility. Every fan has a favorite team and player (personally, I’m on my third Jimmy Rollins shirsey), but what if you’re a fan of baseball in general? Which team do you want on the front, and whose name do you want on the back? Which shirsey should you buy?

Well, any scientific study (which this is) needs criteria, so here are mine:

Without further ado, here are the 10 coolest shirseys in MLB right now, in reverse order. 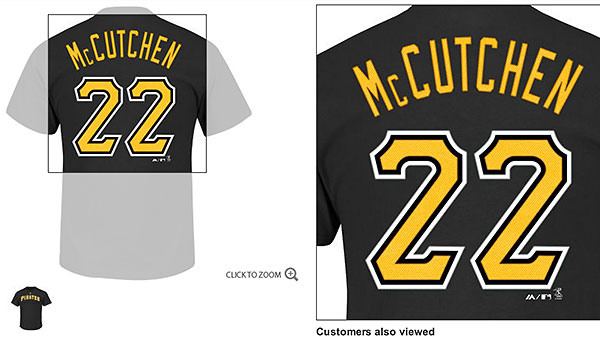 10. Andrew McCutchen, black: Everything about McCutchen exudes cool: the hair, the unique running style, the understated self-confidence. He won last year’s NL MVP pretty much in a walk and led his team to the playoffs, and he’s still somehow underappreciated. Plus, nobody’s going to get angry at you for showing up in a Pirates shirt; Pittsburgh’s most likable team is young and exciting, and ­Cutch is the coolest thing about it. And there’s one more thing: You’ll find a staggering amount of red and blue (and a surprising amount of orange) in major league uniforms, but very little yellow. This shirsey offers a nice contrast.

9. Jason Heyward, blue: I’m a Phillies fan, so I’d rather get diphtheria than wear anything with “Braves” on it. But Heyward is a fantastic, underrated player, and this shirsey has a nice, clean, classic look. The team name on the front is complex enough to be interesting without being busy, and even though Atlanta has a huge national following, you won’t see as many Braves fans out and about as Cardinals, Dodgers, or Yankees fans.

8. Chase Utley, blue throwback: Utley never wore this 1970s uniform full-time, but it’s just a gorgeous shirt. Plus, with Utley, you probably don’t have to worry about him changing teams or uniform numbers.

7. Eric Hosmer, dark blue: Hosmer’s finally coming around, and the Royals are a fun, young team with great uniforms. If this were sky blue, it’d rank even higher.

6. Xander Bogaerts, blue: Thanks to a few factors — namely turning into the Hairy Yankees, the lionization of David Ortiz, the city’s overexposure in recent fiction, and a certain horrifying affront to cinema — the Boston Red Sox are deeply, tragically uncool. A model franchise, but an uncool one. Bogaerts, however, is so cool that he can survive the Sox being uncool. He’s about to take the American League by storm, he’s got an awesome name, and he’s new enough on the scene that you can wear “Red Sox” on the front of your shirt without everyone thinking you’re … one of those fans.

5. Yasiel Puig, gray: The Dodgers have my favorite uniform in the game, and I went back and forth between this gray shirt and the standard blue, but there are more options for white lettering on a blue shirt, so gray it is. The script “Los Angeles” and red uniform number on the front put this one over the top for me. Speaking of over the top, Jake directed me to this “Viva Puig” shirsey, which I’d wear, but not in public.

4. Evan Longoria, retro sky blue: Part of the appeal of this shirt is the old Devil Rays logo on the front, which should have come with a trigger warning for you older Rays fans. As with the Utley shirsey, Longoria never wore this uniform, but you can bet you’ll see fewer of these around than the very pretty but very pedestrian Wil Myers sky-blue alternative.

3. Jonathan Lucroy, gold Cerveceros: Lucroy is sneakily one of the best catchers in baseball. He’s one of the top pitch framers in the game, and when his peers were begging out of the WBC, he stood up and did his patriotic duty with pride. God bless America. He’d deserve a spot on this list no matter what, but combine his awesomeness with the foreign-language uniform and you take it to another level. Unlike NBA teams, which, like lazy seventh-graders, think adding “Los” to a noun makes it Spanish, the Brewers have honored Spanish and German culture by translating the team nickname wholesale. And what makes the “Ceveceros” shirsey better than the “Bierbrauer” option is the color. Milwaukee’s gold uniforms are like the Grand Canyon: You have to see them in person to appreciate them. This is exactly what shirseys are for: The cost and wearability opens the door for a little more whimsy.

2. Jose Fernandez, black: It’s official Grantland editorial policy that Jose Fernandez is The Coolest Damn Thing Ever. If you can stomach forking over a small portion of your money to Jeffrey Loria, Fernandez is, for all intents and purposes, the singularity when it comes to coolness: He’s young, new, exciting, excitable, and without equivocation one of the best pitchers in the game. It’s a shame in some respects, because he’s outshone The Mighty Giancarlo Stanton, himself one of the coolest, most exciting players in baseball. If you go with TMGS over Fernandez, that’s entirely understandable. But the gap between no. 2 and no. 3 on this list is bigger than the gap between no. 3 and no. 15 or so.

1. Manny Machado, orange: Look at it. The crisp, bright orange contrasted against the stark, black letters and numbers. The graceful script, sloping up the chest. It’s an Orioles shirsey, which gleefully thumbs its nose at the evil empires of the Yankees and Red Sox and the smug upstartness of the Tampa Bay Rays. Machado, the catlike third baseman who’s really the engine behind Baltimore’s recent success, is much like Fernandez: a highly touted prospect who was always in the shadow of slightly more highly touted prospects, then reached the majors at a young age and instantly turned into an absolute monster. I mean … come on. Great colors, great-looking shirt, cool player. For the neutral fan, this is it.

If you want to be boring and buy a Derek Jeter shirsey, go ahead. But “cool” looks like Manny Machado.