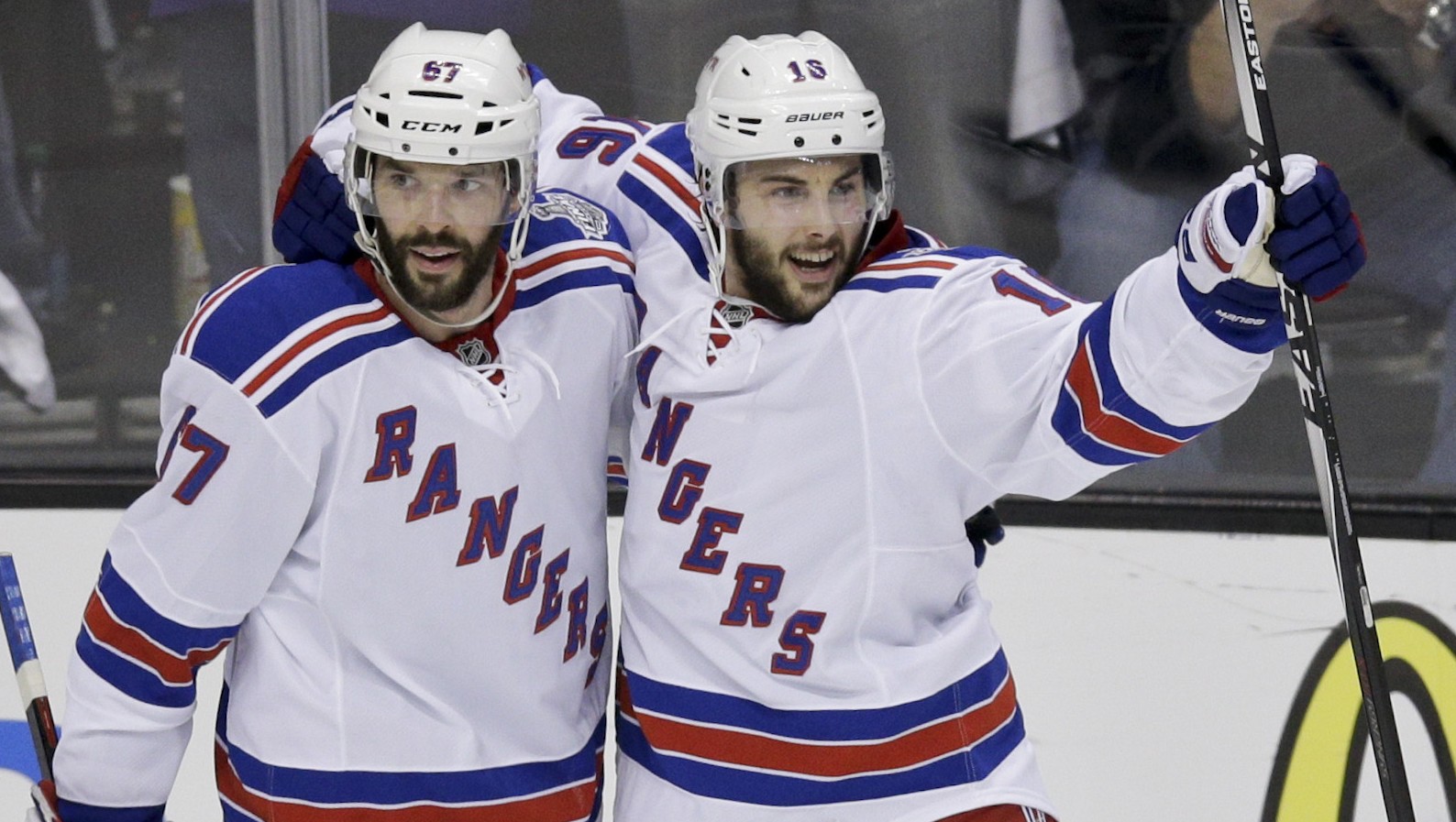 We’re two games into the Stanley Cup final, and it’s not going well for the New York Rangers. Both games followed a similar script — the Rangers built up a two-goal lead, then collapsed and lost in overtime. Now they’re hosting Game 3 tonight, facing a virtual must-win against an L.A. Kings team that seems to be toying with them.

There’s a temptation to bury the Rangers, and if this keeps up for two more games we’ll get the chance to do it for real in a few days. But today, I thought we’d go in a different direction. Because while it’s true that coming home down 2-0 in the series is the worst-case scenario in terms of wins and losses, it hasn’t been all bad for the Rangers. There’s room for optimism here. So we’re going to walk through a few reasons why New York fans should feel like they can absolutely come back and win this series.

And then, once we’ve done that, we’ll inject some reality to crush that hope back into a fine powder of despair.

The most cited stat over the past 48 hours is one that doesn’t even sound possible: The Kings are up in the series 2-0 despite not leading in either game for so much as a second. That speaks to the quirkiness of sudden-death overtime, but also to how well the Rangers have played for long stretches. Despite some predictions that they wouldn’t be able to hang with the Kings unless Henrik Lundqvist stood on his head, the Rangers have absolutely looked like a team that can hold its own.

The blown leads are obviously a major concern, but it doesn’t change the fact that the Rangers have had to play well to get those leads in the first place. If they can keep that up, and get an extra bounce or two along the way, then they can wind up right back in this thing.

Yeah, but: It’s all well and good to talk about deserving a better fate, but that won’t change the fact that the Rangers are down 2-0 and now need to win four out of five. That’s an awfully tough hill to climb against a team like L.A., no matter how well you’re playing.

The Kings Haven’t Been at Their Best

This point is related to the one above, and it’s hard to know for sure where one ends and the other begins. But the Kings have spent most of the first two games seeming … off. They’re making more mistakes, committing more turnovers, and just generally not looking like the team we’ve seen them be for long stretches in this year’s playoffs.

They’ve had their moments, including a third period in Game 1 that was just about as dominating as any you’ll see. But for the most part, they’ve looked very beatable.

Yeah, but: If the Kings haven’t been at their best and are still up two games, what happens if they find another gear?

The Kings Have Been Prone to Losing Streaks

Not many teams can survive one three-game losing streak in the playoffs. The Kings have already had two — the opening three games against the Sharks, and the middle three against the Ducks. They almost did it a third time against the Hawks, losing games five and six before rallying to win Game 7 in overtime.

The Rangers are past the point where they can trades games and still win the series. At some point soon, they need to win a few in a row — and the Kings have shown an odd tendency to let teams do that.

Yeah, but: You’ve probably noticed that none of those losing streaks cost the Kings a series. Whether it’s a mid-series streak or a multiple-goal deficit during a game, this team just seems to enjoy giving itself a high degree of difficulty before skating off with a win.

They’re Back in New York

Conventional hockey wisdom says that you’re never really in trouble in a playoff series until you lose a home game. If that happens to the Rangers tonight, they’ll be down 3-0 and we can just about write this one off. But a pair of wins in New York would send the Rangers back to L.A. all tied up – and, if you believe in that sort of thing, with all the momentum.

Rangers fans have been waiting 20 years for a chance to witness a Stanley Cup final game, and they’re paying through the nose for tickets to this one. It’s going to be crazy. The Rangers have already been starting strong, and tonight they should come out flying.

The Hockey Gods Owe Them One

While Dustin Brown’s goal will be the highlight we remember, the biggest play in Saturday’s game came in the third period. With the Rangers still leading 4-2, the Kings cut the lead on a goal by Dwight King. Lundqvist complained immediately, and it wasn’t hard to see why — King was practically sitting in his lap at the time, and had sure looked like he wound up there intentionally.

While goalie-interference calls have been all over the map this postseason, this one seemed relatively easy. Maybe you could argue against an actual interference penalty, especially since referees are reluctant to hand out minors late in a close game. But there was a second option — calling the contact incidental, which wouldn’t result in a penalty but would still wipe the goal off the board.

Instead, Lundqvist’s protests were ignored and the goal counted, and just about everyone seems to think it was a bad call. It didn’t decide the game — the Rangers still had a lead with less than a period to play, and good teams can close out those games.

But it was a bad break, one of the worst of the playoffs, and if there’s any justice then the Rangers should get a few bounces their way.

Yeah, but: “If there’s any justice”? Is this your first day here? The hockey gods don’t do karma.

OK, Fine … the Referees Owe Them One

This was the theory that the customs guy at the airport wanted to share, so I’m noting it here just in case he’s reading and has the power to send me to the body-search room on the way home.

And it’s not a bad theory. Referees are human, allegedly, and they know when they’ve screwed up. By the time the puck drops tonight we’ll have spent so much time talking about the missed interference call that whoever’s working the game will inevitably be well aware of it.

That doesn’t mean the fix is in (sorry, customs guy). But if there’s a crucial call that could go either way tonight, wouldn’t it be human nature for it to go the Rangers’ way?

Yeah, but: The Rangers already did get a makeup call of sorts on Saturday, when Jeff Carter was penalized in overtime for, what else, goaltending interference. It was a good call, although Lundqvist helped it along with a comical flop. It was actually the second Rangers power play of overtime (the Kings got one), coming a few minutes after a Rick Nash dive drew an interference minor on Justin Williams.

Referees don’t like to miss calls, but they don’t like to be shown up either (right, Tomas Plekanec?). After two overtime penalties that were at least somewhat due to dramatics, the referee karma may actually be working against the Rangers now.

A big reason for the Kings’ uneven play could be fatigue. We’ll say “could be,” because there’s no way to know for sure how much of a factor it’s playing. That’s because we’re literally in uncharted territory — no team has ever faced a stretch of games like the Kings have just to get here.

They’re the first team to ever play and win three straight seven-game series. No team has ever won the Cup while playing more than 18 games to get to the final; the Kings took 21. That would suggest that they should be exhausted, and that would help explain the sloppy play and slow starts. If so, you’d expect that to loom larger and larger as the series goes on, especially now that the coast-to-coast travel has started.

Yeah, but: While the Kings played a ridiculous 21 games to get here, the Rangers kept it to a much more reasonable … 20. They’re probably every bit as desperate for some time off. Which, all attempts at optimism aside, they may be about to get, starting on Wednesday.