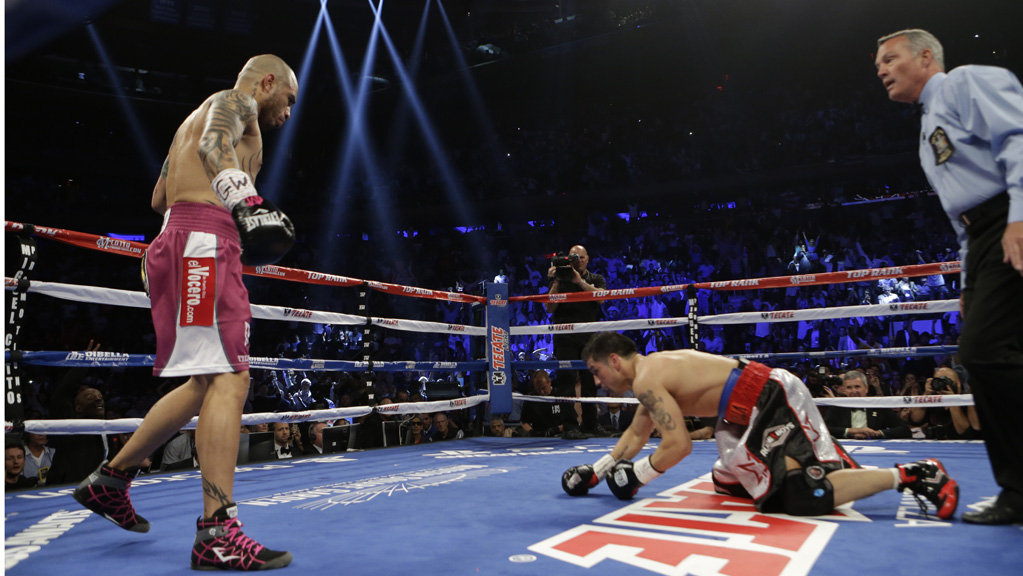 Between rounds during Saturday night’s middleweight championship fight at Madison Square Garden, between the three-minute intervals Miguel Cotto spent stalking and battering Sergio Martinez, my mind kept flashing back to scenes and memories of fragility. I saw my father and how he used to walk before his knee-replacement surgery — gripping his thigh to manually pick up and move his leg while muttering “sonuvabitch sonuvabitch sonuvabitch” through the bone-on-bone joint pain. I recalled a 39-year-old Michael Jordan, draining what should have been a triumphant, game-winning rainbow fadeaway over Shawn Marion in the 2003 NBA All-Star Game. Only it didn’t work out that way: With a few seconds left, Jermaine O’Neal fouled Kobe Bryant; Bryant tied the game at the line; Jordan had a second attempt at a fall-away game winner, and Marion swatted it back toward half court; then MJ’s Eastern Conference squad lost in double overtime. And I thought back to some of the cockfights I’d witnessed while living in the Philippines in my early twenties: One bird, crippled by a blow, dragging itself across the cockpit’s dirt floor with one good wing and kicking frantically at the air to deter its opponent, who was moments away from crashing down with a fatal strike.

The moment from Martinez’s loss to Cotto that I suspect will join this melancholy gallery came late in Round 8. Martinez meant to explode off his back foot and attack Cotto coming forward with a one-two combination. But when Martinez made his move, his burst looked feeble, his right jab fell short, and when he went to plant his lead right foot while throwing the southpaw cross, his knee couldn’t support him. Martinez stumbled forward as if he’d fallen off a cliff. His left glove, which had been aimed at Cotto’s chin or cheek or temple, wound up landing on the ring mat, where it prevented Martinez from executing a full face-plant.

That slip occurred a little more than a round before Martinez’s corner decided to end the fight, and it served as the exclamation point on the story of the 39-year-old Argentine’s physical deterioration. That tale began almost two years ago, but its final chapter started in the first minute of Saturday’s bout, when Cotto landed a left hook high on Martinez’s head that wobbled him badly and exposed how shaky the champion’s legs were. Until that moment, Martinez and his handlers had managed to obfuscate and bluff about the condition of his right knee, which was first damaged when Martinez was knocked down in the 12th round of his September 2012 victory over Julio Cesar Chavez Jr. The knee was operated on after that fight, then reinjured sometime before Martinez’s next bout, against Martin Murray in April 2013, and then operated on once more before the Cotto fight. The Martinez camp did a good enough job of convincing boxing fans and the media of the champion’s health that he entered the ring a slight favorite on Saturday, despite fighting Cotto in the Garden, which is basically his home arena, on the same day as New York’s annual Puerto Rican Day Parade. But all the oddsmakers and experts who favored Martinez did so on one condition — that his legs were good.

After that first Cotto left hook, Martinez seemed to look to his lower body to provide the balance and stability he’d need to absorb and dodge punches all night. He found nothing. Although Martinez was clearly hurt by Cotto’s blow, the three knockdowns that followed in that first round appeared to be as much a product of Martinez trying to figure out how to stay upright than due to an accumulation of blows. At times, it looked like Martinez was sliding around on a floor covered with marbles while Cotto cut off the ring with crisp footwork that might not have seemed out of place in a dance studio.

I spent much of the rest of the fight fixated on Martinez’s right knee, trying to see how it would bend, when it would appear to lock, and in which directions it would allow him to move. After those early knockdowns, his situation looked dire. While trying to circle away from Cotto to buy time to regain his senses in that first round, Martinez almost literally dragged the right leg along with him. It didn’t want to bend or flex or support his weight, and I couldn’t help wondering if Martinez’s cranky joint might have been a factor in his decision to wear a pair of billowing white trunks that hung all the way down to his mid-calf. They looked like the kind of shorts only a genie could be comfortable in, or like Justin Bieber’s idea of a cool outfit to wear at Rucker Park. Then again, trying to bend reason or strategy into the fashion choices of Martinez, boxing’s no. 1 metrosexual leading man and a fighter lovingly referred to by fans and critics alike as “Zoolander,” might be a fool’s errand to begin with.

Things improved for Martinez, but only insomuch as he was able to stop heaving his leg around like an awkward piece of driftwood. For stretches of action in the middle rounds, Martinez was able to bounce on the balls of his feet and hop back and forth in a reasonable-looking but largely ineffective impersonation of his prime boxing form. Those periods, however, would last for only the first minute or so of a round, until dodging or absorbing a shot from Cotto would force Martinez to take an awkward step, to put his weight on the knee in an unpremeditated way, and it would derail the fighter anew. His steps to the side were short and choppy — a ginger little shuffle that seemed to ask, “Is it going to hurt if I move this way?” and then answer, “Yes, goddamnit!” At other points in the fight, Martinez would plant his lead foot in front of him and his knee looked like it would hinge in two separate motions. Down, then inward. Outward, then up. It was the kind of ugly, janky, painful motion that makes anyone who has ever sprained a knee or ankle want to look away.

And even when Martinez was moving more or less smoothly in the ring, without any apparent pain or hitch in his giddyup, he still wasn’t moving on the legs that made him the best middleweight in the world. The legs he used to take the lineal middleweight championship from Kelly Pavlik in 2010, bounding right to left and left to right, side-stepping Pavlik to strafe him with punches that left blood streaming from above both of Pavlik’s eyes. The legs that had the spring that gave Martinez the leverage and power to knock down Paul Williams in their first fight (a disputed-decision win for Williams), and then to knock him out cold in their rematch a year later. The legs with the burst and quickness he used to dance on the edge of Chavez Jr.’s punching range for 11 rounds, dashing in to bury jabs in the much larger man’s midsection and then darting out before his opponent could muster a counter. Or the constant movement Martinez used that kept the behemoth middleweight from setting his feet and letting his fists go, the changes of direction that made Chavez Jr. look as if he had been snake-charmed into not throwing punches. 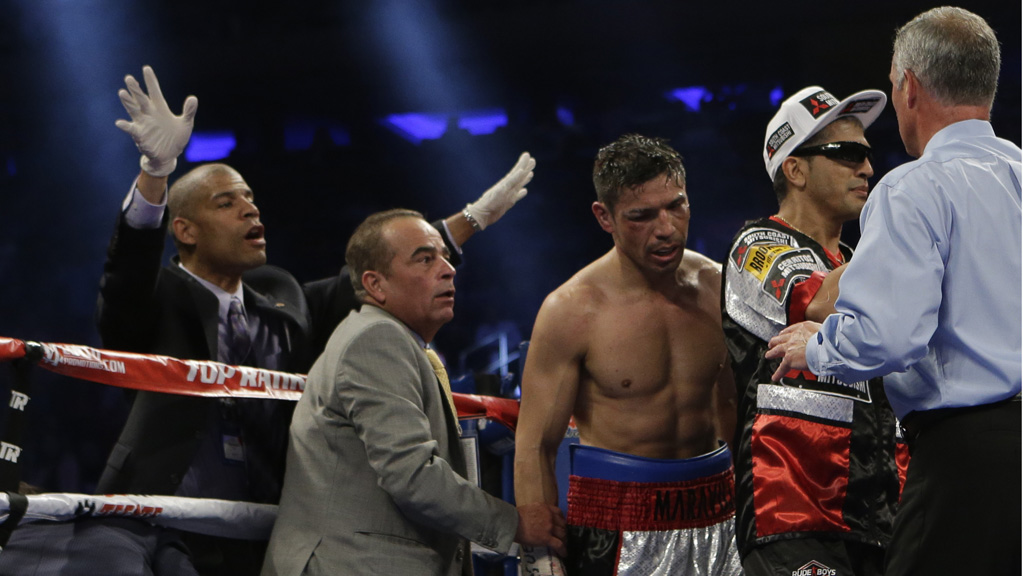 The Martinez who fought Saturday had scarcely any of these moves left. He could try to bounce on the outskirts of Cotto’s jab, but when he went to spring forward in attack, his legs were too weak to close the distance and find his opponent, too weak to generate the power to hurt him. And when Martinez went to retreat on those legs, he didn’t have enough bounce to get out of Cotto’s range, so instead he ate left hooks and right crosses all night. Prime Martinez fought with his gloves by his waist because he knew his legs and his reflexes were enough to evade his opponents’ flurries. Saturday Martinez almost never dropped his hands. It was as if he, too, knew that the physical tools that made him such a devastating and beautiful fighter to watch had deserted him, and they weren’t coming back — probably ever.

It’s not Cotto’s fault that the Sergio Martinez he defeated Saturday evening to become middleweight champion was the real Martinez in name only. Cotto was sharp, aggressive, strong, and fighting in a style that seemed perfect for him in his second bout under trainer Freddie Roach. By winning, he’ll likely have his pick of glamour matchups with Floyd Mayweather Jr., Canelo Alvarez, or possibly even a rematch with Manny Pacquiao (unlikely, since Cotto and Pacquiao now share the same trainer). That next fight will likely tell us more about Cotto’s resurgence than his dismantling of a one-legged Martinez. The physical gifts that made Martinez a great fighter were long gone by the time of Saturday’s fight, with little remaining but heart and determination, which kept Martinez on his feet in Rounds 2 through 9 (barring a slip in the middle rounds and a near-knockdown that was incorrectly ruled a knockdown in the ninth). That same heart led Martinez to beg for one more round to defend his title after the ninth, and it also led to Pablo Sarmiento’s response, which I imagine will remain the most moving exchange between trainer and fighter that boxing will produce this year.

“Champion, your knees are not responding,” Sarmiento told Martinez before the 10th round. “Sergio, look at me … I’m gonna stop this one. Sergio, you are the best for me. You’ll always be the best champion, Sergio.”