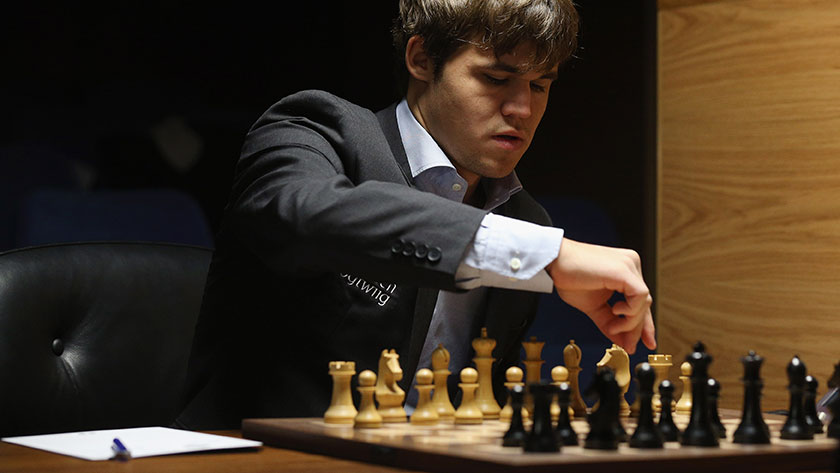 In the following video, reigning FIDE world champion Magnus Carlsen moves his king forward one space on a chessboard. He then picks up his pen, pauses, and records the move. You can tell he’s recording the move slowly because he’s still writing as his opponent, five-time world champion Vishy Anand, begins taking in the board. Carlsen then puts down the pen and waits. Anand stays still for 35 seconds, then he crosses his arm and moves his A-file pawn forward one space. Anand immediately records the move — but Carlsen doesn’t. Instead, his head drops into frame. He rests it on his forearm and shakes it from side to side. After a beat, Carlsen does record Anand’s move. Then, after another beat, he folds his arms on the table in front of him and drops his head again.

Here are seven ways to contextualize what may well prove to be the most dramatic back-to-back plays in any game — in any competition, athletic or otherwise — this year.

1. Big chess matches are shown simulcast with grandmasters commentating and powerful computers quickly simulating all possible future outcomes into a win-expectancy chart. Without these aids, the match would be incomprehensible. Despite the ubiquity of chess — an estimated 700 million people globally play at least one game of chess per year — what Carlsen and Anand are doing exceeds the understanding of all but a few thousand people. That said, numbers are in some ways a poor proxy for competing stratagems.

When followed from a purely numerical perspective, chess matches between top grandmasters usually take one of three forms: stalemates, one player consistently pressing their advantage until the other acquiesces, or a match that starts as one of the above two and then swings wildly on a single blunder. When watched on a computer, the win expectancy charts look familiar to any sports fan, even if the phrases “stalemate,” “pressing their advantage,” and “blunder” have little to do with what’s happening in the minds of the players.

But in one minute of an hours-long round, the win expectancy did swing massively in both directions due to simple blunders. Carlsen accidentally put himself one move away from a board position from which any top player would have throttled him. Anand then failed to make that move. Carlsen walked the bases loaded in the bottom of the ninth in Game 7 of the World Series and Anand hit into a triple play. Carlsen butt-fumbled in the Super Bowl and Anand kicked the ball out of bounds as he tried to pick it up. 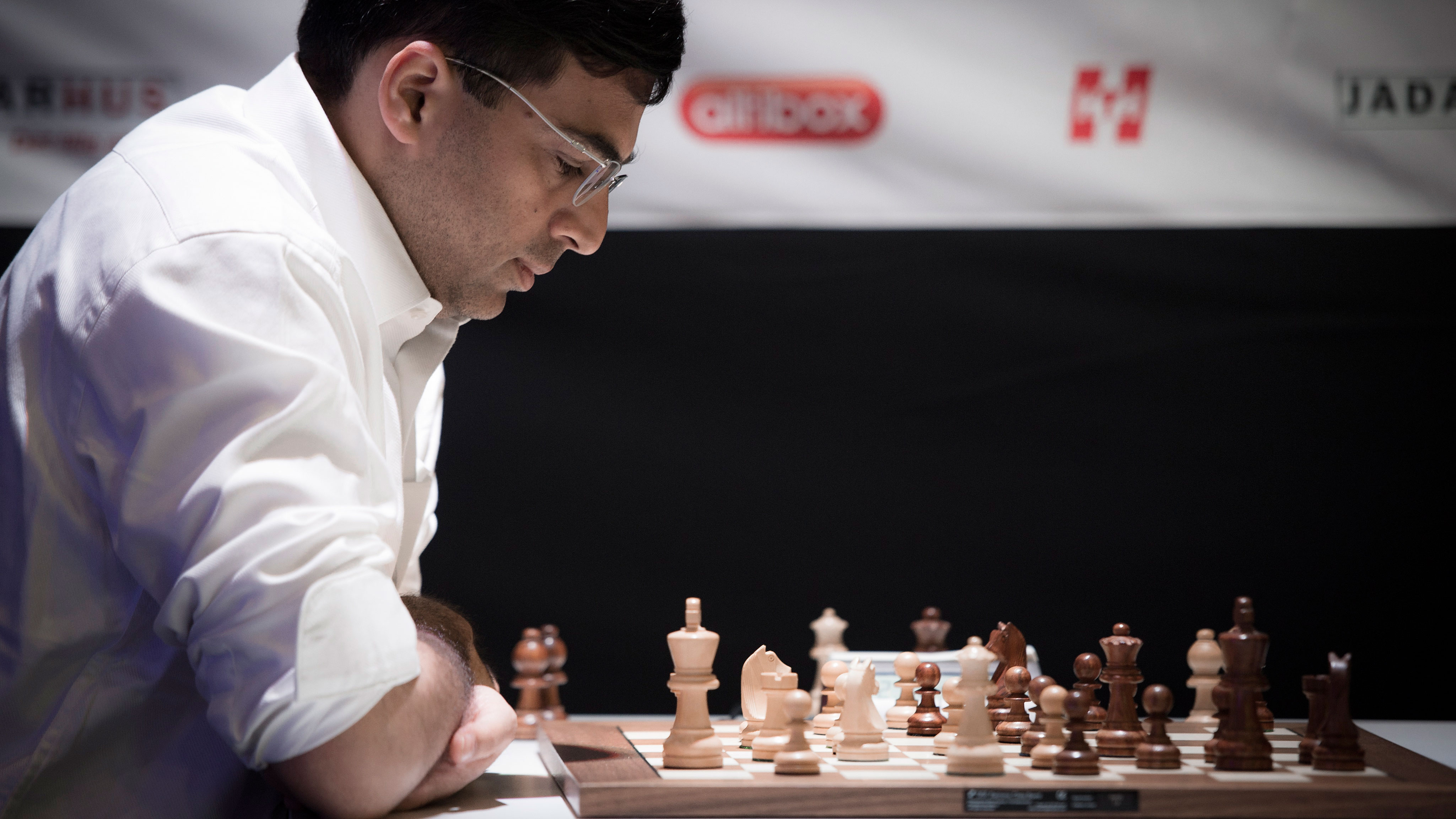 2. Chess involves two people looking deeper and deeper into the future, attempting to account for all the variation that could exist going forward, knowing that no matter how hard they think, their analysis is doomed to be incomplete. Given that the development of the frontal lobes of our brains is both what allows us foresight and that which separates us from other hominids, chess is a game of two people trying to be the better human.

A generous interpretation of a world championship in chess, then, would be to say that it’s the crowning of the ultimate human.

3. I once heard someone describe the pauses in the plays of Harold Pinter as “containing the life and death of an entire world in them.” Watch Carlsen’s pen stop moving when he realizes the mistake he’s made. I cannot imagine what’s happening in Carlsen’s head, but I imagine that the explosion of the entire world isn’t far off.

4. The round in the above video was the sixth in this year’s FIDE World Championship, and the two players entered locked in a 2.5-2.5 tie. Before this pair of moves, the match belonged to Carlsen, playing with the white pieces and imposing his will on Anand. After these moves, Anand eventually conceded and Carlsen picked up the win. The pair then drew the seventh and eighth rounds, leaving the match at 4.5 to 3.5 with four rounds to play.

Last year’s FIDE World Championship was also contested between these two men. The score was 2-2 after four rounds before Carlsen went on to rout Anand 6.5-3.5 to claim his first world championship. 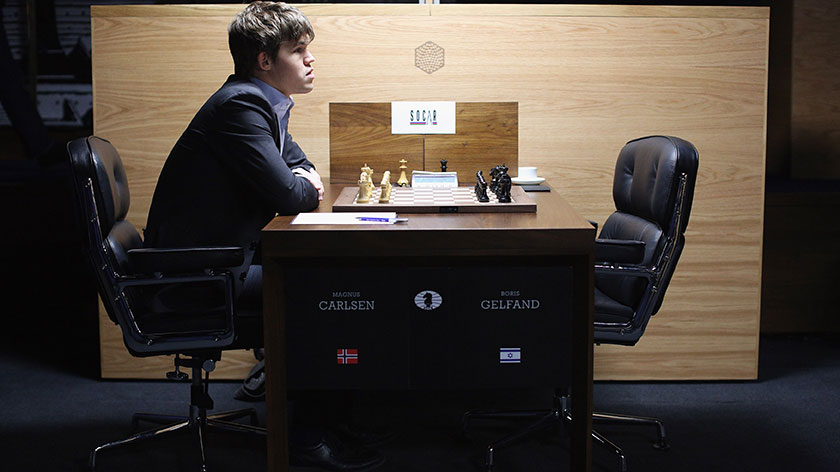 5. Magnus Carlsen, at 23, is arguably the greatest chess player ever. Historically, chess players peak at 35, so Carlsen occupies a staggering, unprecedented position. He’s also, by his lofty standards, struggling.

At the 2014 Sinquefield Cup, contested in St. Louis, 22-year old Fabiano Caruana grabbed headlines by winning his first seven matches against one of the strongest fields in chess history. Carlsen finished a distant runner-up, and his current ELO ranking is down to 2863 from his record peak of 2882. He’s still the best player in the world, but the distance between him and the field seems to be closing.

The conventional wisdom among grandmasters watching this match is that Anand is outpreparing Carlsen in his opening, and that — with the exception of Round 6 — Carlsen has been forced to work his way back into every round. This has led to some exhausting and thrilling showdowns (including a 122-move draw in Round 7), but it also means that the world championship is being contested at a lower level than usual.

6. The match is being held in Sochi, Russia, about a 14-hour drive from the home of FIDE president Kirsan Ilyumzhinov. Ilyumzhinov is perhaps best known for claiming he was given a tour of the galaxy by a spaceship full of aliens. His 1997 claims were taken seriously enough that a member of the Russian parliament petitioned former president Dmitry Medvedev to investigate the matter.

Reports out of Russia suggest that FIDE does not currently have the money in its bank accounts required to pay out the event’s €1 million prize fund. Meanwhile, the promotional organization that runs chess’s most prestigious event was just sold by American entrepreneur Andrew Paulson to Ilya Merenzon for £1 under opaque and suspicious circumstances. Unconfirmed suspicions suggest that Ilyumzhinov has a large proxy stake in this promotional organization. Merenzon, for his part, has guaranteed that all obligations will be met, and with Russian natural-gas giant Gazprom, a company with more than $150 billion in revenue, functioning as the primary sponsor for this tournament, that seems likely.

These issues did not pop up out of nowhere, though. Carlsen was almost stripped of his title after threatening to refuse to play in the world championship because of the venue and lack of funding. He pushed for the tournament to take place in March 2015, only to acquiesce at the last minute rather than lose his crown. Had Carlsen backed out, Sergey Karjakin would have taken his place after finishing second to Anand in the tournament qualifier. Karjakin is Russian Ukrainian, and he supported Ilyumzhinov’s decision to wear a Vladimir Putin T-shirt during his FIDE election campaign against former world champion Garry Kasparov.

A less generous interpretation of this world championship in chess, then, would be that it’s a politically motivated, ill-timed pageant orchestrated by Putin and a wealthy politician who believes he was abducted by aliens.

7. I didn’t see the blunder. I mean, I saw it. I was watching the match at about five in the morning, but I didn’t see what happened as it happened. The Houdini computer I was watching along with immediately registered the swing in win expectancy, but it frequently shows wild results in the first few seconds after a move. I’ve grown numb to the initial burst that suggests a move may have been a crucial blunder, as the computer often needs to push a little deeper before seeing that the status quo has not shifted. Additionally, the broadcast had gone to a break, so there was no live commentary on the moves. You can hear a snippet of the ad in the YouTube capture of the moment. Anand had already played before the commentators were back on air.

To a stronger mind than mine, it was obvious.

When Magnus blundered with Kd2, I was in the playing hall, and wanted to scream NE5!!! It could have changed chess history I guess;-).

Having had the position explained to me, I now see that Anand could move his knight, eventually take two pawns, and press a massive advantage into a relatively easy win.

But to Anand, it was such an out-of-character mistake for Carlsen to make that he couldn’t see his simple path to a huge advantage. None of the futures he had visualized involved receiving a gift from Carlsen, so when one was presented to him, it was impossible for him to recognize and accept it. Anand was so distracted by what he assumed the future would be, he couldn’t see that he had already won the game. And so he didn’t.

NHL Tankapalooza! The Race to the Bottom and Two of the Biggest Prospects in Years