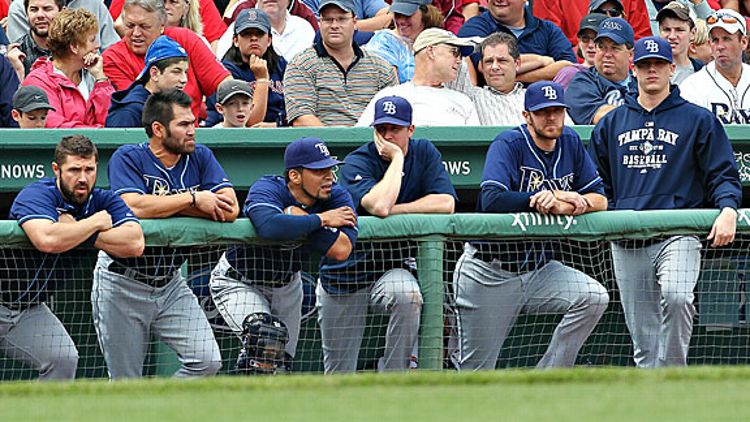 The Tampa Bay Rays just did something no other team had ever done before: They marched into Fenway Park and held the Red Sox to three hits or fewer, three games in a row. Their starters just missed tossing three consecutive complete games against one of the best offenses in baseball, and the Rays are now on pace to win 88 games in what will likely be another solid season.

Too bad none of this makes a lick of difference. Not when your team plays in the AL East.

Three years ago, the Rays entered the 2008 season with an Opening Day payroll under $44 million. That was less than one-third the size of Boston’s payroll and one-fifth the size of New York’s. Through trades, organic improvement and plenty of luck, the Rays surged to 97 wins (their run differential pointed to a 92-win team) and an AL pennant. It’s hard to say when (or if) we’ll ever see another AL East team pull off something like that again.

Six Teams You Don’t Want to Face in the Playoffs

It’s not that winning on a much smaller payroll than the big boys isn’t doable. Tampa Bay came back two years later and won the division again. But by that point, team payroll had jumped to $73 million as the Rays made an all-in run at another pennant with expensive walk-year players like Carl Crawford and Carlos Pena in tow. Crawford, Pena, Matt Garza, Jason Bartlett, Rafael Soriano, Joaquin Benoit, Grant Balfour, Dan Wheeler and Randy Choate were all dealt or let go at season’s end. Tampa Bay managed to build another good team this year, recasting the bullpen MacGyver-style, getting results from rising young players and, in typical Rays fashion, hitting the lottery on a castoff player. (In this case, it was BABIP-inflated first baseman Casey Kotchman.)

Good, but not good enough. It doesn’t matter how much talent the Rays farm system produces and how many shut-down relievers they pull out of thin air. They have to spend more money if they want to knock off the Yanks and Sox. Trouble is, revenue streams are down across the board. The Rays are drawing fewer fans, they’re locked into a below-market TV contract for another half-decade, and their agreement on the miserable Trop lasts another 16 years. An extra $50 million isn’t walking through that door.

The picture seems considerably brighter for the Red Sox &#8212 except that Carl Crawford looks unlikely to earn his $142 million keep. Upton on Tuesday lasered an absolute meatball from John Lackey out of the park. But the much-maligned Lackey pitched well enough to give his team a chance to win, going 6.2 innings, striking out seven, walking three and yielding three earned runs. The start continued a strong stretch for Lackey, and came after Erik Bedard tossed a third straight solid start since his trade from Seattle the night before. The third-starter spot no longer looks like a nightmare for the postseason, with Lackey projecting as at least a workable option, and Bedard possibly a little better, if he can stay on the field.

Boston’s cushion over the Rays will allow for some caution down the stretch, starting with David Ortiz’s bursitis problem. Boston has called up slugging catcher Ryan Lavarnway, and now we’ll see if his .304/.386/.614 line at Class AAA Pawtucket can carry over to the big leagues. With Boston likely to carry fewer pitchers on the playoff roster, we might see a position player spot go up for grabs. Adding a power bat off the bench — a catcher no less — could fortify an already deep Boston roster.

At least the Rays have some options for next year. They could trade James Shields, the poor man’s Roy Halladay with nine complete games this season. They could trade Jeff Niemann, who tossed a complete game in the nightcap of Tuesday’s doubleheader. They could flip Wade Davis and Alex Cobb. Convince a team that it is getting the B.J. Upton who lit up the ’08 playoffs, and they could cash in there, too. Add a potential star center fielder in Desmond Jennings and one of baseball’s best pitching prospects in Matt Moore and there’s hope for 2012. But the Rays have potential holes at four different positions next year — five if they trade Upton. Another $42 million payroll won’t cut it.

Again and again, the Rays keep proving they can hang with the best. Too bad baseball doesn’t give out a prize for that.