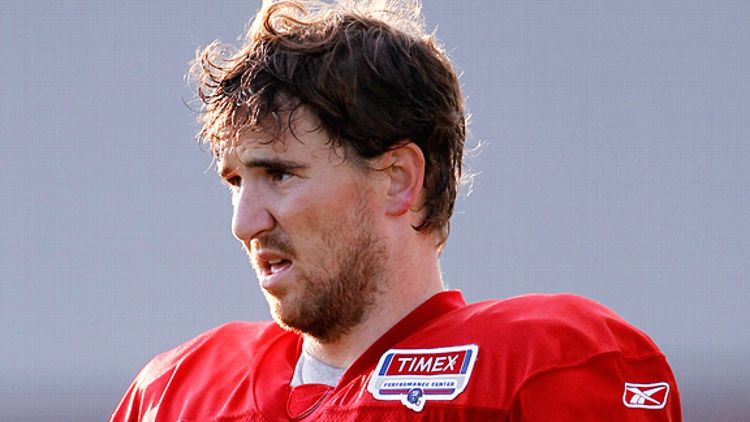 New York Giants quarterback Eli Manning drew some heat this week for saying that he considers himself to be in the same class as Patriots quarterback Tom Brady. Some have been quick to pillory Manning for his self-aggrandizing remarks, but was Eli really all that far off the mark in comparing himself to Brady? Maybe not.

Put aside everything you think you know about these two signal callers and do a rigorous comparison of their statistics. You’ll see just how similar they really are. Your eyes lie. The numbers don’t.

These two stat lines are so similar that one would almost think they were generated by the same player. (Or at the very least, the products of some sort of advanced cloning technology.) Sure, Player A throws for more yardage while tossing fewer picks, but who knows which quarterback is actually better? It’s almost a matter of opinion since they’re clearly in the same class.

Could you even tell which stats are Brady’s and which line belongs to Eli? Prepare to be shocked and amazed. Player A is Brady, and Player B is Manning! They’re like images in a statistical mirror!

These raw stats don’t tell the whole story, though. When the stats gurus over at Football Outsiders crunched the numbers for last season, they ranked Brady as the league’s top quarterback in passing DVOA (Defense-adjusted Value Over Average). Meanwhile, Manning hit the rankings at 20th overall. Even the brilliant stat geeks agree with Eli’s comments; the numbers clearly show that both Manning and Brady are in the same class of top 20 quarterbacks in the National Football League!

Of course, football isn’t just about the cold, hard statistics. When you’re judging quarterbacks, there are intangibles to consider, and that’s where Eli really shines. Look at all of these edges he holds on Brady:

And that’s before we even consider how Eli perfectly placed that ball so David Tyree could catch it off on his helmet in Super Bowl XLII. Brady would probably have just hit his receiver in the numbers there, and where’s the fun in that? Nobody’s quite as elite as Eli in the Making-Games-More-Interesting Department.

This rigorous analysis should make it clear that yes, Eli’s comments about being in the same class as Brady were slightly ridiculous. If anything, Eli might be the superior option. Has anyone trademarked the T-shirt slogan “You Can’t Spell ‘Elite’ Without ‘Eli!'” yet?