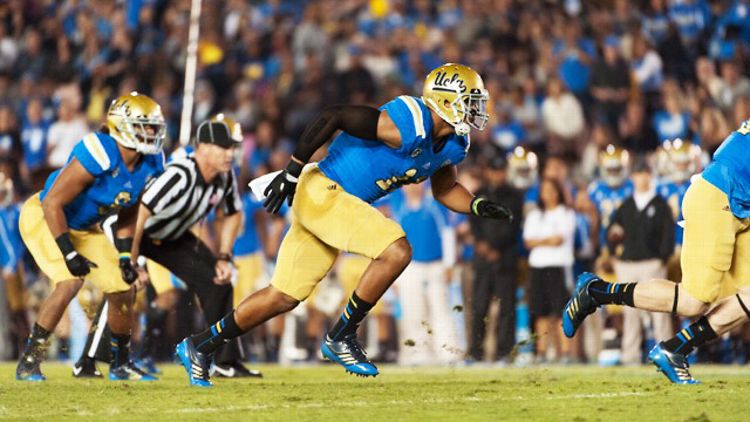 Who Is He? UCLA senior linebacker Anthony Barr.

Where Is He From? Los Angeles.

Years Played: He’s currently in the middle of his fourth season as a Bruin.

Follow the Bouncing Ball: Barr, a Loyola High School star in football and track, was a highly coveted recruit in the class of 2010, chased after by half of the Pac-12 and such college football notables as Florida State, Michigan, and Notre Dame. He signed with the Bruins and spent his first two seasons of college ball on offense, recording seven starts in 2011 as an F-back in UCLA’s pistol offense. Barr moved to linebacker upon coach Jim L. Mora’s arrival, starting all 14 games in 2012 and earning first-team all-conference honors. Barr returned for his senior season and currently ranks fourth nationally in forced fumbles per game. He has recorded four sacks, 11 tackles for loss, and three forced fumbles on the year.

His Game in 25 Words or Fewer: Anthony Barr’s superpower is transforming on the field from a human into a bull and making a china shop appear everywhere he goes.

Social Media Presence: Barr can be found on Twitter showering praise on his teammates’ efforts and occasionally dispensing relationship advice:

He can also be found on Instagram, posting mostly football-related photos and occasional gluttonous goodness:

Best Highlight: There’s a long list to choose from here, but let’s go with what’s surely a sentimental favorite from Barr’s first year as a linebacker: this sack of USC’s Matt Barkley.

Should We Know Him? You’re about to know Barr whether you’d like to or not, and not just because he’s going to be called upon to use his blistering speed against Marcus Mariota and the no. 3 Oregon Ducks this weekend: Despite having just 20 games of experience at linebacker, Barr is being projected as a high first-round pick in next spring’s NFL draft.