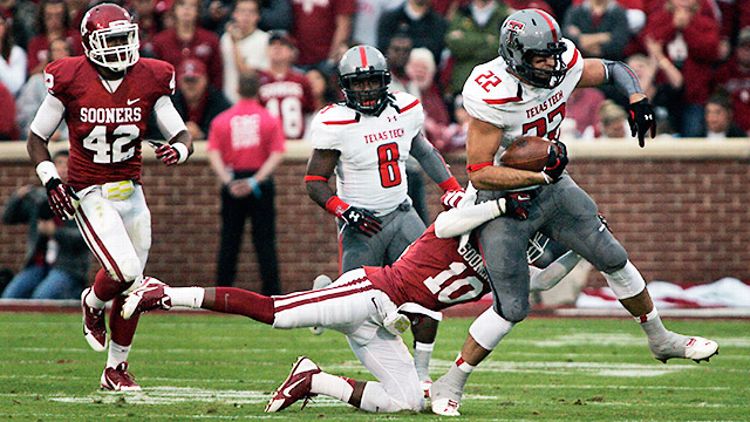 Who Is He? Texas Tech tight end Jace Amaro.

Where Is He From? San Antonio.

Follow the Bouncing Ball: Amaro, a regional recruiting coup for the Red Raiders who was also pursued by Baylor and Texas A&M, saw action in all 12 games as a freshman, recording seven catches for 57 yards and two touchdowns. His promising sophomore campaign was derailed during Tech’s blowout win over West Virginia in 2012: After scoring the Raiders’ first touchdown on a 39-yard catch from Seth Doege and rolling up 156 total receiving yards, Amaro was knocked out of the game when a helmet to his abdomen fractured a rib and lacerated his spleen. Amaro missed the remainder of the regular season, returning only to catch two passes in Tech’s Car Care Bowl win over Minnesota before being ejected from the oddly spiteful contest.

In 2013, Amaro has four 100-yard receiving games, all despite never recording more than nine catches. He hit that 100-yard mark in his last three outings, at Oklahoma, at West Virginia, and at home versus Iowa State. His most prolific outing came in Tech’s 42-35 win over the Cyclones, with 143 yards on nine receptions.

His Game in 25 Words or Fewer: Just put him on the Mackey list already.

Social Media Presence: Amaro can be found in midair on Instagram …

Best Highlight: That the kid can catch and run is not in dispute, but get a load of this block against Texas State:

Should We Know Him? Watch with interest as the no. 15 Red Raiders continue their uphill trek into the most treacherous portions of their Big 12 schedule, including Saturday’s meeting against no. 18 Oklahoma State in one of this weekend’s few Top 25 matchups. And get really excited if Amaro makes good on his promise to return for a senior season and continues to develop his chemistry with Tech’s hatchling quarterbacks.