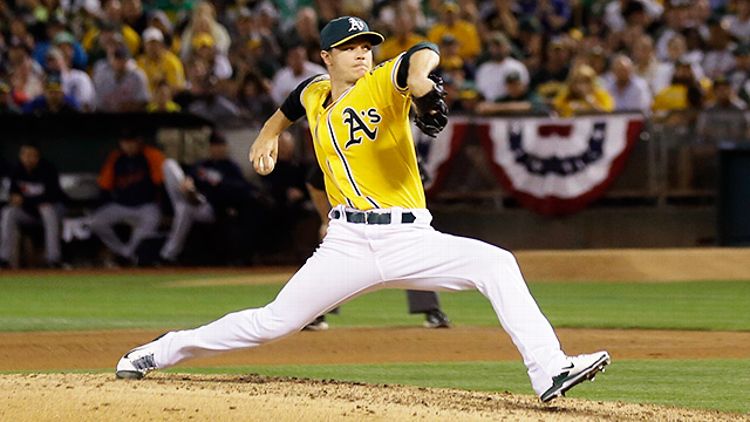 The 2013 MLB playoffs are in full swing. Are you keeping up? Baseball has a lot of games, and also a lot of players. If you’re overwhelmed, Michael Baumann is here to help. Brush up on Baumann’s playoff starting lineup, then circle back throughout the postseason for the lessons our Who’s That Guy series will bring.

Who Is He? Oakland Athletics pitcher Sonny Gray.

Where Is He From? The Nashville, Tennessee, native played college baseball at Vanderbilt University.

What’s His Salary? The MLB minimum, though he did land a $1.8 million signing bonus when he went no. 18 overall in the 2011 draft.

His Game in 25 Words or Fewer: A steady diet of fairly straight mid-90s fastballs with a liberal topping of hard 12-to-6 curveballs. Like getting Justin Verlander in a Happy Meal.

Most Impressive Highlight: Gonna have to go with Saturday night. In the third inning, Gray let a fastball run up and in on Torii Hunter, who, predictably, had some words for Oakland’s young starter. (I dream that one day someone will love me as much as Hunter loves hearing himself talk.) Hunter’s not a Hall of Famer, but he’s not that far off, with almost 2,200 career hits, five All-Star appearances, and 50 career WAR, to say nothing of the .304/.334/.465 line he posted this season. He’s a fairly substantial baseball personality.

So what did the pocket-size rookie do? Well, he struck out Hunter on a 96 mph fastball. Then he threw another 96 mph fastball past Miguel Cabrera, who happens to be the best hitter on the planet. It felt as though Hunter told Gray to know his place, and Gray promptly turned into an anthropomorphic middle finger, or a teddy bear that morphs into a battleship that radiates hatred and yo-yo curveballs.

A nice tidbit on that inning comes to us courtesy of FanGraphs’ Eno Sarris, who says that only one of Gray’s 995 regular-season pitches hit 96 mph. Gray hit that mark three times in the third inning on Saturday.

Social Media Presence: At @SonnyGray2, you’ll find a lot of musings about college football, life on the road, and the details of Gray’s part-time child-care experience.

While I was charting some random women made me babysit her kid for an inning. #milbproblems she crazy

Also, he’s quite proud of his mustache.

Now About That Mustache: Gray is a 5-foot-11, 200-pound, 23-year-old rookie, but he looks even younger than that. In fact, he looks like the 12-year-old son of Matt Damon and Ryan Phillippe.

Maybe Gray thought growing a layer of peach fuzz on his upper lip would make him look older. If that’s the goal, Gray would have been better off wearing a trench coat and sitting on another short guy’s shoulders, but regardless, this ‘stache is really something. How special is it? Well, think about it this way: In South Dakota, they’re currently carving a 560-foot-high likeness of Crazy Horse into a mountain down the road from Mount Rushmore. When completed, the Crazy Horse Memorial will be nine times the height of the faces on Mount Rushmore, meaning visitors will be able to see the faces of the horse and its rider for miles down the road. It’ll be a truly awe-inspiring sight, one that cannot be done justice unless seen in person.

Should We Know Him? If you’re an A’s fan, a college baseball devotee, or a draftnik, you should already know Gray. And unless you’re the kind of anhedonic creep who wasn’t entertained by his start on Saturday, you’ve probably resolved to know more about him henceforth.

But in terms of that whole “Happy Meal Verlander” thing: No, Gray’s career probably won’t be on par with Verlander’s, but that’s OK. Verlander is already in the 99th percentile for pitchers all time, so we shouldn’t make any crazy assumptions just because Gray, who’s thrown 72 more innings in the majors than I have, fought one of the best pitchers of his generation to a draw on Saturday.

Gray also doesn’t need to be Verlander to be worth knowing. The rookie has pretty awesome raw stuff. He does face a major impediment to sustained big league success, because it’s next to impossible for pitchers who are shorter than 6 feet tall to throw their fastball on a downward plane, and because smaller bodies tend not to hold up to the strain of throwing 200 innings per year. That said, there are exceptions, namely Roy Oswalt, Tim Lincecum, and Pedro Martinez, so A’s fans have reason to remain cautiously optimistic about Gray’s future.

But let’s table that career talk for now. Gray is currently a key cog on a hot playoff team, so know him. Watch him pitch. And watch his mustache grow.