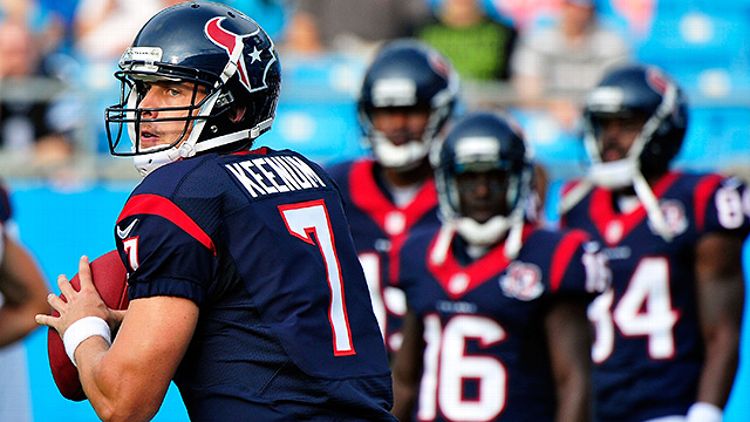 Who’s That Guy is an orientation tool we’ve been using to navigate college football’s vast landscape. This week we’re sticking a foot out of bounds to highlight a former NCAA great making his NFL debut. WTG is filmed in front of a live studio audience.

Who Is He? Houston quarterback Case Keenum. Houston Cougars or Houston Texans? Both!

Where Is He From? Abilene, Texas. We Probably Could Have Guessed That, Seeing As How His Name Is “Case Keenum.” Did you know his middle name is “Austin”? Bullshit. Totally true.

Years Played: Keenum played four college seasons, plus three games in an injury-shortened season for which he later received a medical redshirt; he has yet to see regular-season NFL action.

Follow the Bouncing Ball: Keenum’s collegiate career saw him set NCAA records for career total offense, passing yards, completions, and touchdown passes, and become the NCAA’s first player with three 5,000-yard passing seasons. In his time as a Cougar, he recorded 1,546 completed passes for 19,217 yards and 155 touchdowns, as well as 300 rushes for 897 yards and 23 scores. Keenum signed with the Texans as an undrafted free agent and spent the 2012 season on the practice squad. He entered 2013 behind Matt Schaub and T.J. Yates on the roster; following an injury to Schaub and a brief but unpromising stint with Yates at the helm, the Texans announced that Keenum would start in Week 7 at Kansas City.

Here’s coach Gary Kubiak on the move: “His eyes got kind of big, but he’s excited. He’s a competitor and he’s a very confident young man. We went out there today and I thought he practiced really well. He’s been in big games, a lot on his shoulders, big stage, played in a lot of football games. I know it’s a tremendous opportunity. It’s what you work for as a kid. You get into this league and you look for an opportunity and, all of a sudden, here’s an opportunity for him very early in his career.”

His Game in 25 Words or Fewer: Wildly prolific in college; thus far nonexistent in the pros.

Bio Tidbit: Once, against Marshall on October 22, 2011, Keenum threw more touchdowns than incomplete passes, going 24-for-28 with six aerial scores. Another time, against Texas State on September 4, 2010, he threw five incomplete passes and five touchdowns. Watching Case Keenum in college was like watching a sentient Game Genie.

Best Highlight: Fighting through option paralysis here, but gotta go with the nine-touchdown performance against Rice in 2011:

(Keenum, afterward: “That was probably the most fun I’ve ever had playing football.” You don’t say.)

Should We Know Him? Trick question: You should have already. Not knowing him will be difficult after Sunday, because you can’t not notice a guy taking his first regular-season pro snaps in a midseason game on the road. What we’re wondering now is what Keenum might be famous for after Week 7. Debuting at Arrowhead will be no cakewalk, but if there’s comfort to be found, maybe it’s in the fact that there’ll be fewer Texans fans there to boo him if he has a rough start?