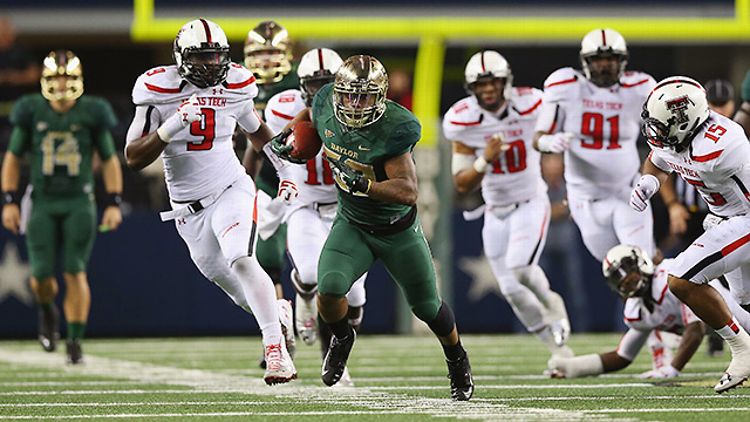 Who’s That Guy is an orientation tool for use in navigating college football’s vast landscape, and is filmed in front of a live studio audience.

Who Is He? Baylor running back Shock Linwood.

Where Is He From? Linden, Texas.

Years Played: He’s freshly unboxed! Linwood played his first collegiate snaps in Week 1 of 2013 and has recorded carries in eight games this year.

Follow the Bouncing Ball: A largely unheralded prospect out of Linden-Kildare High, Linwood received offers from a handful of FBS programs, but only one other offer from a Big Six school (TCU). His first 100-yard game came in October versus West Virginia, where he actually trailed Lache Seastrunk’s rushing output by almost 50 yards, because that’s the kind of thing that happens when you play offense for Baylor.

Despite that performance, it’d be more appropriate to call the Bears’ Week 11 Thursday-night game against Oklahoma Linwood’s breakout event. When Seastrunk and Glasco Martin were both knocked out of the game with first-quarter injuries, Linwood proceeded to roll up 182 yards.

His Game in 25 Words or Fewer: How about his game in 25 carries or fewer? He gained those 182 yards against Oklahoma on just 23 touches.

Bio Tidbit: Wondering about the source of “Shock”? Linwood explains the origins of his nickname, his attachment to his mom, and his quarterbacking aspirations here:

Social Media Presence: Living a retweet-happy existence over at @shocklinwood and showing his appreciation for the finer things in life on Instagram:

Best Highlight: Pretty much all of the Oklahoma game.

Should We Know Him? At this rate, as a discerning sports consumer, you should probably familiarize yourself with every skill player who dresses for the Bears, just to be safe. Last week against Texas Tech, with Seastrunk and Martin both still out, Linwood put up 187 more yards on 29 carries … and fourth-string running back Devin Chafin added 100 more yards on 11 carries. So how good is Baylor’s fifth-string tailback? PROBABLY PRETTY GOOD. We could That Guy this team forever.

Linwood and the no. 4 Bears face no. 10 Oklahoma State in the marquee matchup of Week 13.