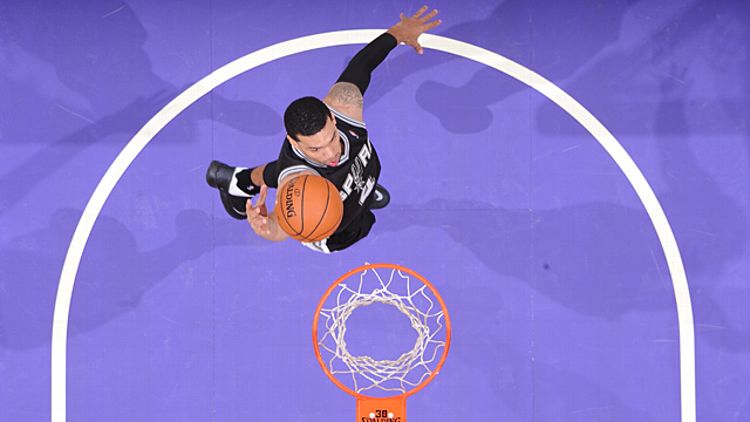 Danny Green is a human with a cell phone, so I sent him some text messages.

Me: Danny, what’s up, man?
Danny: nothing
Me: I saw you on Inside Stuff
Danny: yeah!
Me: pretty, pretty weird
Danny: ??
Me: I guess I just never expected you to be all crazy about snakes. Like, that’s a weird thing, you know that, right?
Danny: no
Me: it is. That’s not a normal thing. Dogs are fine. Cats, even. But not giant snakes. It’s real creepy.
Danny: how so?
Me: oh I don’t know maybe BECAUSE THEY ARE GIANT SNAKES THAT KILL THINGS BY STRANGULATING THINGS, DANIEL, THAT’S WHY
Danny: they actually don’t strangle they constrict
Me: YOU’RE NOT MAKING THIS ANY BETTER, DANIEL
Danny: -----<~ Me: ???
Danny: that’s a snake with his mouth open
Me: that’s terrible, is what it is
Danny: did you know that Tim Duncan collects knives
Me: I mean, I didn’t KNOW that but I basically knew it. He looks like the type.
Danny: he collects knives and I collect snakes
Me: nice try
Danny: they’re the same
Me: they’re not
Danny: they can both kill you
Me: I’m pretty sure you’re dicking with me right now
Danny: did you know what snakes have two penises?
Me: whaaaaaaaa ewwwww grooooosssss, danny
Danny: look: http://news.softpedia.com/images/news2/Those-luchy-bastards-3.jpg
Me: I’m not clicking on that
Danny: just do it
Me: no
Danny: why not?
Me: are you serious why not??? dude
Danny: it’s nature.
Me: look, danny, there are a bunch of things that I’ll look at it but double snake penis isn’t one of them
Danny: I think you’re being shortsighted
Me: well I think you disappeared in game 6 and 7 of the finals last year
[No response.]
Me: I’m sorry. I didn’t mean that.
[No response.]
Me: Danny?
[No response.]
Me: okay, fine. I’m going to look at the snake’s double peen.
Danny: YES!
Me: OH MY GOD DANNY WHY WHY WHY EWWW I’M DEAD I’M GONE I NEED YOU TO COME SCOOP MY EYEBALLS OUT OF MY HEAD NOW
Danny: it is true glory
Me: have you ever seen that movie anaconda?
Danny: who is that you think you’re talking to? OF COURSE I HAVE SEEN THE MOVIE ANACONDA
Me: right. My bad. My favorite part is when the bad guy rolls out the snake skin of the big anaconda he wants to catch and ice cube shouts, “there’s snakes out there this big!?” probably the best acting I’ve ever seen
Danny: truth
Me: this is the most that I’ve texted anyone about snakes
Danny: least for me
Me: perhaps we should try and come up with some sort of cool snake-based nickname for you?
Danny: perhaps you should be my best friend?
Me: !!!
Me: does it bother you that kobe gave himself a snake nickname?
Danny: no. I don’t own snakes.
Me: did you make a whole bunch of snake jokes when those nude shots of George hill were on the internet back when he played with you guys?
[No response.]
Me: I would have
[No response.]
Me: is that why he was traded? Is pop anti “snake” shots?
[No response.]
Me: hello?
[No response.]
Me: danny?
[No response.]
Me: I have an idea.
Danny: nope.
Me: it has to do with snakes
Danny: shoot
Me: let’s film a redo of beyonce’s who run the world song but instead of saying girls run the world we say snakes run the world
Danny: I LOVE IT
Me: what did you think of snakes on a plane?
Danny: I loved the snake parts
Me: how do you think you guys are gonna do in the playoffs this year?
Danny: me and the snakes? We’ll be alright?
Me: no. you and the spurs
Me: wait
Me: there’s a snake playoff???
Danny: boy is there
Me: alright. Okay. Well, so I’m at my snake limit. Can we talk about basketball?
[No response.]
Me: hello?
[No response.]
Me: dude, come on
[No response.]
Me: jesus christ

Who's That Guy? Baylor Running Back Shock Linwood!