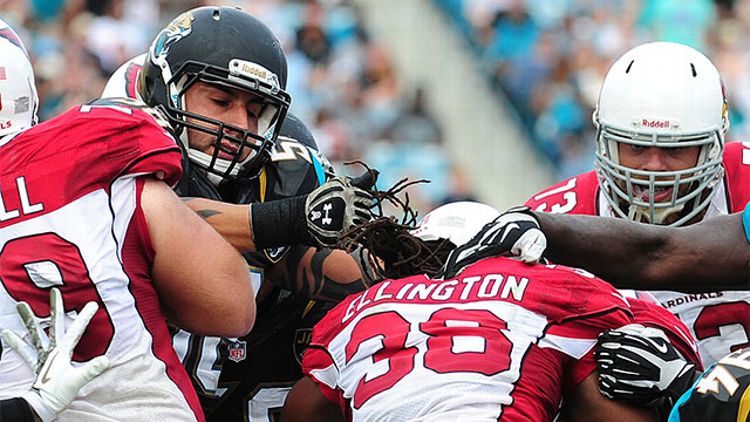 The smart money is on one or both of them being sidelined with a torn quad muscle after slipping on a quarter during the coin toss. But if they should for some reason get past the pregame ceremony, I expect the diminutive former Patriot to show up the man he was cast aside for. Welker averages more than six receptions a game. On the other hand, the oft-injured Amendola is tied for 94th in the league in receptions — just ahead of Chad Ochocinco and Kylie Jenner. The Broncos clearly made out on this deal and would love nothing more than to prove it Sunday night. 30,000 jermajesties

Cardinals (-1) in the first half vs. the Colts

By now you know the drill. Indy’s offense struggles to move the ball. Twenty-three-going-on-45-year-old running back Trent Richardson gets stuffed at the line of scrimmage a dozen times in a row, and just when you’re about to write off Indy for dead, Andrew the Giant Luck sticks his giant boot in the face of the home team to secure a victory. Bruce Arians has a nice head start preparing for the team he led to the playoffs last season. The Colts have been outscored 66-9 in the first half over the last three games. The University of Phoenix (wow, I guess that IS a real school) Stadium crowd should be pumped up enough to give the Cards a lead at intermission. 20,000 jermajesties

Bucs to score over 20.5 points vs. Lions

Am I wrong to like this miserable Bucs team as much as I do? Just a few weeks ago they were dealing with a potentially deadly locker-room infection. But enough about Josh Freeman. Mike Glennon, Bobby Rainey, and Vincent Jackson have become a pretty formidable offensive threat. Wait … let me read that last sentence back to myself. Yep, it’s true. Glennon has thrown for more than 1,500 yards and 11 TDs in five games as a starter. He should be playing from behind in Detroit on Sunday. I didn’t see anything out of the Lions secondary last week to indicate that the Bucs’ offensive machine stops this week. Take the over. 20,000 jermajesties

Texans (pk) over Jags
I’ve forgiven the Texans for knocking me out of my eliminator pool. I can’t really blame their defense. There’s only so much you can do when you’re faced with the dynamo known as Matt McGloin. All bitter sarcasm aside, losing to the Jaguars at home is a firing offense for everyone in the organization.

Chargers (+15.5) over Chiefs
Kansas City has come down to earth. The Chiefs have gone two consecutive weeks without a sack. Two weeks and five days if you include the days in between games. I have a hunch that K.C. could be looking ahead to their revenge game vs. Denver next week. In fact, I wouldn’t be surprised if the Chargers won the game outright. I mean, now that I said it, I would be very surprised — but before the prediction I had a chance. Take the 15.5 on a teaser. It’s a lot.

Ravens (+6.5) over Jets
The New Jersey Zigzags lost last week, which means they are long overdue for a win, right? Not so fast. The Jets have given up 86 points in the last two road games. Ray Rice is starting to resemble a first-round fantasy running back again, as he busted through for 131 yards on the ground last week. If the defending Super Bowl champs lose this week they are bounced from the playoff picture. Worse yet, if they lose by more than 6.5 they are immediately stricken from my holiday card list.

Monday-night back judge Terrence Miles’s kids spend over/under 43.5 seconds in timeout for breaking curfew before he then changes his mind after his wife convinces him he misread his watch

Wow, that was a long way to go for such a dumb joke! And I realize it’s Friday and you’re all sick of hearing about the picked-up flag on the Gronkowski pass last Monday night. But the wounds are still very fresh when you’ve been screwed out of 30,000 hard-earned jermajesties (I had the Pats scoring over 23 points) because an officiating crew wanted to get a head start on traffic.

Over/under $357,500 fine the NFL will figure a way to levee on controversial Toronto mayor Rob Ford for this late hit on a female council member earlier in the week

This guy is a comedy delight. I’d pay 50,000 jermajesties to get him to appear at my Thanksgiving table next week if by some miracle he was able to live that long.

I can see it now. Right around halftime of the Thanksgiving game, when the great Matt McGloin has given the Raiders a 27-6 halftime lead on my ’Boys, that Pinocchio snout will shoot out from the press box and poke a hole through Jerry’s trillion-dollar JumboTron. Rumor has it there are plans to increase the size of the giant video monitor to accommodate defensive coordinator Monte Kiffin’s cataracts. He is old.

The guy single-handedly (literally) shook an entire goalpost from the ground!!! I prefer that to dunking over a Kia Optima any day of the week that ends with “y.” Sorry, kickers, but it might be time to raise that crossbar three or 20 feet.

Over/under .5 touchdowns scored by Andre Ellington for the remainder of the season after his dreadlocks were unceremoniously removed during a game last week

Unfortunately, I think we’re about to find out that NFL’s version of Samson is powerless without his braids. Same reason Willie Nelson never made it past Pop Warner.

Over/under 1.5 weeks before I stop posting the Hilton Las Vegas Supercontest picks by Joe House and me for fear that those looking to pass us in the standings will use them to base their selections

Team HOUSEATSAL is tied for second place after 11 weeks. I’m officially scared — mostly that House and I will win the $700,000 and use it to purchase a 24-hour all-you-can-eat Brazilian steakhouse open only to ourselves. This week:

Wife and I have a new tradition – folding and putting away laundry while we listen to @BillSimmons guess the lines with @TheCousinSal.

Only fitting since the Sportsish Guy and I have been taken to the cleaners as much as we have.

Referring to my struggle to keep score in the weekly “pick the lines” contest with Bill Simmons:

Excellent point, @neverlecture. Incidentally, that tweet would’ve been good enough to make it even if you had kept just the first nine words.

Over/under the next 15.5 years I will be haunted in my sleep by visions of The Wire’s Idris Elba’s cream-pie ambush the other day on Jimmy Kimmel Live

Stringer Bell vs. Proposition Sal. Who would pay to see that?