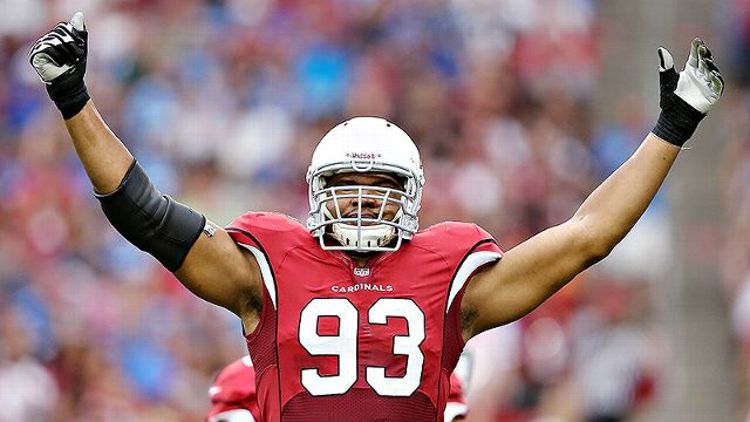 If I’d asked you in August who would lead the league in defensive DVOA through 11 weeks, how many guesses would it have taken before you landed on the Arizona Cardinals? I’m comfortable saying at least 10, and probably more. It would have been reasonable to believe that Arizona would have the worst defense in its own division, but certainly not one of the best in the league. Yet here we are, 10 games into the season, and the Cardinals have ridden that defense to a 6-4 record and face a season-defining game against the Colts on Sunday. The last team to beat the red-hot Panthers? That would be the Cardinals, who dominated the Carolina offense and held Cam Newton to just six points back on October 6.

The pertinent question here seems to be, “How the hell did this happen?” Well, for the most part, things aren’t all that different than they were a season ago. The Cardinals finished sixth in defensive DVOA last year, and they brought back most of the pieces from that team for this year. One major change was at defensive coordinator, where Ray Horton was replaced by former Eagles defensive coordinator Todd Bowles, but schematically, things have been very similar for Arizona. They still play a variety of fronts, which is possible because of the stable of defensive-line bodies they can throw out there at any time.

The big names on the defense are in the secondary, and for the most part, they’ve lived up to their reputations this year. Tyrann Mathieu has been nothing short of excellent as Arizona’s third cornerback (they play enough nickel that he’s essentially a starter), and Patrick Peterson has continued to play very well. Considering he went to the Pro Bowl a season ago, Daryl Washington is also an established name, and his ability to rush the pass as an inside linebacker (the way Arizona uses him as an A-gap blitzer probably makes him the most impactful ILB rusher in the league) has added a new dimension to the Cardinals’ defense since he returned from his four-game suspension. That will be something to watch on Sunday. Arizona brings at least one extra rusher on 50 percent of snaps — the highest figure in the league, according to ESPN Stats & Information — and the interior of the Colts’ line remains their biggest weakness. Rookie left guard Hugh Thornton has struggled since taking over for 2013 free-agent signee Donald Thomas, and right guard Mike McGlynn has been even worse. Washington has a chance to terrorize the Colts’ offense.

Washington provides a different element to the Cardinals’ pass rush, but the collection of defensive linemen/rush linebackers for Arizona may be the strength of this defense. The best player on this defense isn’t Washington or Peterson; it’s monstrous defensive end/tackle/destroyer of all things Calais Campbell. Campbell plays all over the Cardinals’ front, and although his five sacks don’t make for an overwhelming total, what he adds in the run game is the central part of Arizona ranking second in run defense DVOA. It would never happen, but he has a legitimate case for Defensive Player of the Year.

Arizona’s leader in sacks is actually a familiar name — 35-year-old warlock John Abraham, whose seven sacks give him a total of 129 for his career. That’s 11th all time. Abraham was supposed to be a situational pass-rush specialist nearing the end of the line, yet only 13 players in the league have more sacks. Dan Williams, Darnell Dockett, and Matt Shaughnessey have also contributed as part of that front four (or five), with Shaughnessey’s run-defense prowess playing off Abraham’s ability as a pass-rusher.

The sad part about Arizona’s success on defense is that it might not matter, on Sunday or for the rest of this season. The Cardinals’ offensive line is still an absolute mess, and although Carson Palmer has looked much better of late, he’s done it against a trio of teams currently sitting at a combined 5-26. If the Cardinals, currently tied with San Francisco at 6-4 and right in the wild-card race, do have a shot at the playoffs, it will be because their defense carried them there.

One player we’ll be going out of our way to watch for at least 10 plays.
Gerald McCoy, DT, Buccaneers

McCoy belongs with Campbell in the group of overlooked-but-worthy DPOY candidates. The third overall pick from the 2010 draft really started coming on last season, but this year, he’s probably been the most dominant player in the league at his position. Tampa Bay had a historically great run defense last season, thanks in large part to McCoy’s efforts, and this year he’s improved significantly as a pass-rusher.

He has six sacks on the season, but that number does little in explaining how disruptive he’s been for the Bucs all season. With little outside pass rush to speak of, Tampa Bay needs McCoy to dominate, and especially as of late he has. Sacks are tough to come by against Matthew Stafford (the least-sacked quarterback in the league), but I’ll be curious to see how often and how thoroughly McCoy manages to beat standout Lions rookie Larry Warford and at least make Stafford get rid of the ball before he wants to.

Offensive tackles made up three of the first four picks in April’s draft, but so far, the best one in the class looks to be the one picked 11th overall by San Diego. Fluker was a starter at right tackle from day one, and although he hasn’t been dominant, he’s been a very reliable contributor for a Chargers offense that’s been much better than most people anticipated.

Injuries have forced Fluker to the left side for two games so far, and he’s had much more trouble on that side. He’ll play left tackle again on Sunday, and that means a full afternoon of dealing with Tamba Hali, who despite a quiet outing last week in Denver has been incredible all year. The book on Fluker coming into the draft was that he’d be a mauler in the run game from the start but might struggle in pass protection. That hasn’t turned out to be true (he’s been about average in both areas), but this week should provide the biggest test he’s had all year in the passing game.

About Last Weekend: G-Men Fading Away