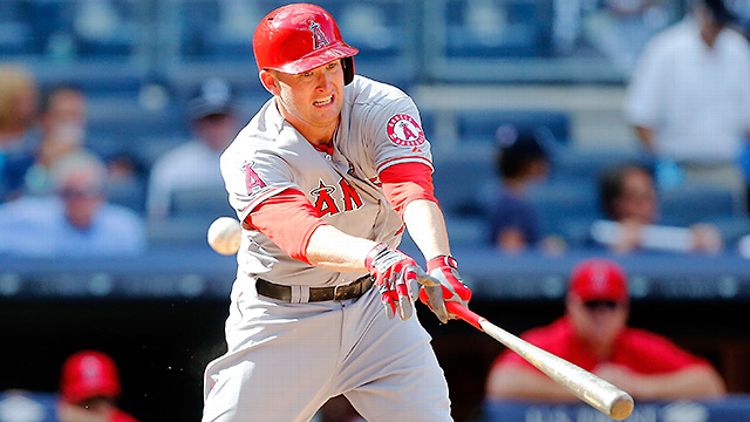 A trio of intriguing, midlevel Tuesday deals answered a few questions here at baseball’s winter meetings, but left many more unanswered. Here’s a look at what each deal means for the teams involved — and for the notable outfielders and starting pitchers still in limbo.

Trumbo is the biggest name in this trade, so let’s start there. Arizona landed a soon-to-be 28-year-old thumper who’s averaged 32 home runs a year over his first three full major league seasons. Given how scarce power hitters in their prime are in this thin market, acquiring one without paying an obscene amount of money seems like a major coup. Trumbo also checks two of the boxes that interested D-backs general manager Kevin Towers the most: He’s a corner outfielder with power, and he’s a player who comes advertised as a good makeup guy. Trumbo could also show more power as he moves from Angel Stadium (one of the worst ballparks for home runs) to Chase Field (one of the best). It’s quite possible Trumbo could reach 40 homers per year in Arizona, and deliver something like 100-120 bombs over the 2014-16 seasons in which the Diamondbacks will control his rights. And with the D-backs coming off a year in which they spent a modest $86 million, Trumbo, who is about to be arbitration-eligible for the first time, addresses the need for low-priced talent.

Stathead consensus is that the D-backs will regret the trade, however, even if Trumbo does hit all those homers. Trumbo is a low-contact hitter who whiffed 184 times last season, which isn’t a problem if a hitter also walks 100 times, but becomes a glaring concern when the hitter doesn’t walk much, and Trumbo has amassed just 115 bases on balls in his three seasons. What’s more: Trumbo is going to a team that went out of its way to purge its roster of high-strikeout guys. Trumbo has posted a career .299 on-base percentage, the same as Tony Batista’s career mark. And that figure isn’t weighed down by early struggles: Trumbo’s OBP last season was a paltry .294. He is also a below-average fielder, and he’s leaving the AL for the NL, where he’ll no longer be able to DH and will instead land in left or right field.

These are all legitimate concerns. If Trumbo truly does settle in as a 35-40-homer guy and stays healthy, however, it would still make him an above-average player who can support the excellent Paul Goldschmidt in the middle of Arizona’s lineup. So, I’m not necessarily ready to call this a terrible move for the Diamondbacks.

The bigger problem is one of opportunity cost. Arizona has now traded three of its better trade chits this winter. In return, the D-backs have landed Trumbo, and … that’s about it. The team’s first notable offseason move was dumping Heath Bell and a good chunk of his remaining contract, while sacrificing 22-year-old left-handed pitcher David Holmberg to make the deal work. To get Trumbo, the Diamondbacks gave up 25-year-old center fielder Eaton and another 22-year-old left-handed pitcher, Skaggs. While I believe teams (and fans and analysts) can sometimes overrate prospects’ potential, it’s hard to ignore the math: Arizona traded 11 years of team-controlled service time with Eaton and Skaggs for three with Trumbo. Schugel and Jacobs could add more time in the D-backs’ favor, but neither player is expected to amount to much.

Eaton, despite being three years older than Skaggs, could prove to be the bigger loss. For one thing, he’s not a pitcher, which inherently makes him a less volatile commodity. He also boasts an intriguing skill set as an up-the-middle player with great speed (46 steals across three levels in 2012) and a good batting eye that could net solid walk totals. When healthy, he projects to play an above-average center field. Health is no guarantee after an elbow injury and other setbacks limited him to 66 games last year, however. There are also questions about whether he’ll hit enough, given his lack of power. It’s worth it for the White Sox to roll the dice anyway, because 150 games of Eaton in center could net a three-win player making peanuts, and that’s the kind of commodity the South Siders badly need.

The overarching question is whether the Diamondbacks might’ve landed a better return if they’d packaged Eaton, Skaggs, and Holmberg together, landing a power bat at a corner outfield spot to fill the perceived hole that became exacerbated when Towers traded away Justin Upton last year amid the GM’s quixotic quest to win the makeup World Series. In reality, Arizona didn’t have a gigantic outfield hole with Cody Ross, A.J. Pollock, and Gerardo Parra, but none of those players fit the masher mold Towers craved. When available talent is scarce, fixating on very specific player parameters rather than simply seeking out the players who can help the most can be an iffy proposition.

Meanwhile, the Angels added two lefty starters who could man the back of the rotation in 2014, without adding more bloated salaries to a roster that already includes a pair of huge albatrosses in Albert Pujols and Josh Hamilton. Even if Skaggs and Santiago never become more than no. 4 or no. 5 types, they’ll still be valuable assets to have for league-minimum salaries next year, especially considering decent-but-not-great starters like Scott Feldman are pulling down three-year deals at $10 million per as free agents.

The Angels, like the Diamondbacks, had a glut of outfielders heading into hot stove season, and they’ve now addressed their two most glaring needs, reeling in David Freese to play third base while adding Santiago and Skaggs to hopefully firm up the rotation behind Jered Weaver and C.J. Wilson. None of the players the Angels have acquired figure to be stars. But cheap, effective talent on a stars-and-scrubs roster is always welcome. And if Santiago can improve command of his secondary pitches to go with his plus fastball and better-than-average strikeout rates, this could prove to be a sneakily strong offseason for the Halos.

The Rockies acquired left-handed starter Brett Anderson from the A’s in exchange for lefty starter Drew Pomeranz and right-hander Chris Jensen. Anderson looked like a potentially elite starter when he broke into the league, making 30 starts at age 21 and delivering better-than-average strikeout, walk, and ground ball rates in the process. Injuries have slowed him down since then, and those health concerns coupled with Oakland’s surplus of starting pitching and normal salary crunch necessitated a trade.

Necessary or not for the A’s, this was a logical move for the Rockies, costing them just $6 million next year (Oakland will pay $2 million of Anderson’s 2014 salary) for a soon-to-be 26-year-old lefty starter who could immediately become their best pitcher if he can stay healthy for a full season. Anderson’s $12 million club option for 2015 will look like a bargain if he does stay healthy and reclaim his rookie form. And even 20 to 25 starts would help Colorado a lot in 2014, given how thin the rotation gets after Jhoulys Chacin, Jorge de la Rosa, and Tyler Chatwood (with Chatwood a prime regression candidate given the risk of being a pitch-to-contact guy in a ballpark where contact tends to equal trouble).

For the A’s, this deal sheds the necessary salary and also provides an interesting flyer on a lefty with some ability. Pomeranz was the prize of the Ubaldo Jimenez trade in 2011, only to fall out of favor with Rockies management. Since then, Pomeranz has been pummeled while pitching at Coors Field. While his numbers in the similar high-altitude environment of Colorado Springs were better, Pomeranz has been shredded by right-handed hitters, and needs to develop a better changeup to address that problem. For the baseball-equivalent dollar value of a ham sandwich, though, it’s worth it to the A’s to see if they can teach him one.

Rajai Davis became the fourth outfielder this offseason to agree to a two-year contract, signing a deal with the Tigers worth right around $10 million. His deal is probably the most surprising, given that Davis puts up lesser numbers than David DeJesus, David Murphy, and Nate McLouth, and profiles as more of a fourth outfielder.

Davis still has value, of course. He’s arguably the most valuable baserunner in the game, and he adds a new dimension to a Tigers team that has seen fewer players steal 30 bases in a season since 2000 than any other team save for the Cardinals and Giants.

Put aside Davis’s speed, though, and this signing becomes frustrating because of what it suggests the Tigers might not do. I liked the trade that sent Prince Fielder to the Rangers for Ian Kinsler for baseball reasons, given that Detroit was effectively carrying three designated hitters, had a hole at second base, and got a solid player in Kinsler who doesn’t have Fielder’s consistent power output but does other things well. Part of the trade’s appeal, however, was that it freed up salary for the Tigers to presumably make other moves. If that trade, and the more puzzling swap of Doug Fister to the Nationals, isn’t followed by, say, signing Shin-Soo Choo to man a corner outfield spot and add lefty sock to a lineup suddenly short on it, then the sequence of moves makes less sense. Picking up Davis seems to augur poorly for a Choo-type deal.

If GM Dave Dombrowski still has another ace up his sleeve (perhaps a contract extension for Max Scherzer?), then Detroit’s offseason shopping list will start to make more sense. Otherwise, we’ll have to start to wonder why so much talent from a very good 2013 team went away without enough coming back.